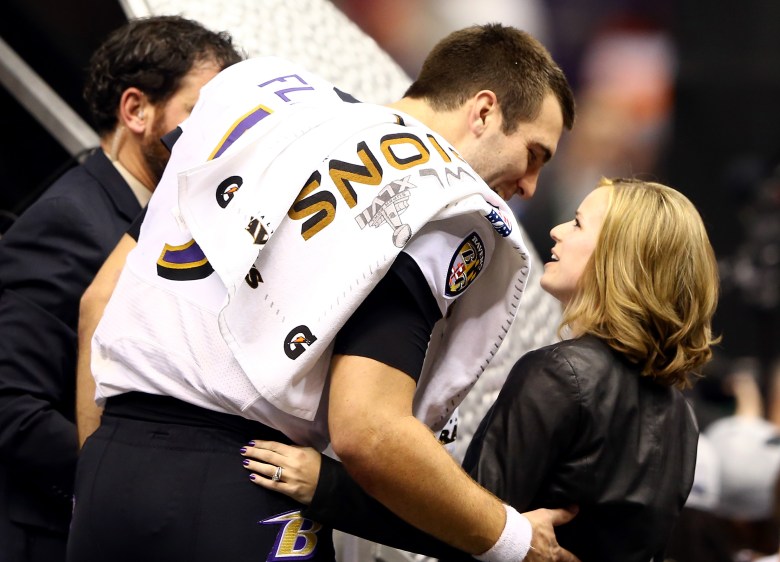 Joe Flacco and his wife Dana have been blessed with three sons, however the births of his last two sons took place during the season giving Flacco some extremely hard decisions to make between career and family.

Here’s what you need to know about the Flaccos:

1. Joe & Dana Have Been Together Since High School

The pair grew up in Audubon, New Jersey, which is just outside of Philadelphia.

They both attended Audubon High School and began dating when they were seniors. In 2010, seven years after they graduated, the two tied the knot in Audubon. The firework-clad reception was held in Philadelphia. Photos of the event can be seen on Jason Prezant Photography’s website.

On June 13, 2012, during the Raven’s minicamp, Joe and Dana welcomed their first son, Stephen. Three months later, Joe began what would eventually become a championship season, ending with a win over the San Francisco 49ers in Super Bowl XLVII.

Dana was pregnant with their second son, Daniel, during that Super Bowl win. He was born on September 15, 2013, as Joe was leading the Ravens to a 14-6 win over the Cleveland Browns.

While there was some scrutiny directed at Flacco for missing his son’s birth to play, the Ravens’ website reported he said there was a silver lining that came from his not being there.

4. Joe Missed the Pro Bowl For Their Third Son

Flacco and his wife Dana’s third son, Francis Michael, was born on Tuesday, January 20, 2015 weighing nine pounds, seven ounces. While Flacco missed his second son’s birth, he chose to skip the Pro Bowl to make sure he was their for Dana during the birth of their third.

“They called about the Pro Bowl and he had to decide, Dana or the Pro Bowl,” coach John Harbaugh said on the call. “We know that he made the right choice.”Flacco was an alternate to the Pro Bowl, but he declined an invitation after several initially selected quarterbacks, including the Denver Broncos’ Peyton Manning and the Green Bay Packers’ Aaron Rodgers backed out.

Flacco is the oldest of six and wants to give his kids a childhood like the one he had. He told the Ravens’ website he would like to have infinite kids, but added that five was more of a realistic number.

He also said that he loves the idea of having a lot of boys — his family consists of five boys and one girl — but would like for his wife to be able to enjoy a daughter. At the time, he said he thought Baby No. 3 might be the little girl they’re hoping for, but he got another son which he was ecstatic about.