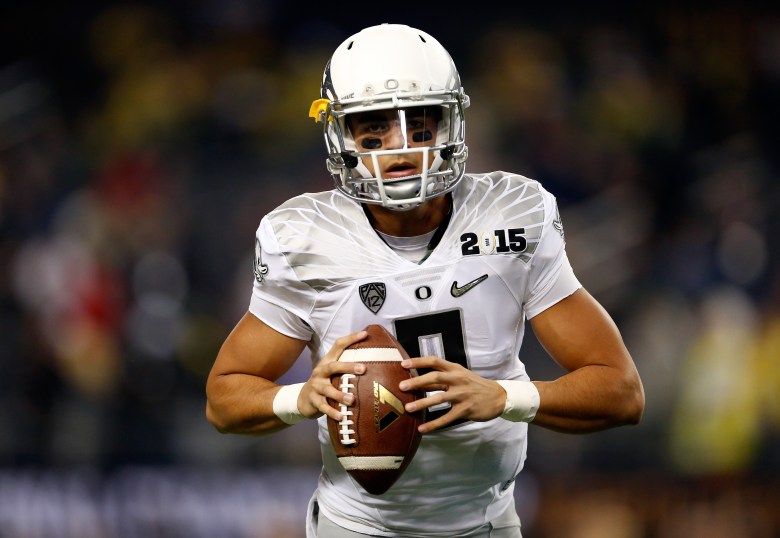 On Wednesday, Oregon Ducks quarterback Marcus Mariota announced that he would forego his senior season and enter the 2015 NFL Draft.

Mariota released a statement thanking the university and each of the coaching staffs that he played for in his three years at the school:

“After meeting with my family I have decided to forego my final year of eligibility and apply for the 2015 NFL draft. My four years at the University of Oregon have been an awesome experience. I cannot thank Coach Kelly, Coach Helfrich, Coach Frost, the rest of the Oregon coaches and the support staff enough for molding me as a person, player and student-athlete.”

In Mariota’s three seasons as Oregon’s starting quarterback, he compiled wildly impressive numbers, and did so at an efficiency rating that was through the roof in comparison to other college quarterbacks who went on to be successful in the pros. Mariota’s interception on the last play of his National Championship Game loss to Ohio State prevented him from having the lowest interception percentage in college football history.

Marcus Mariota had 105 TD passes, 31 rushing touchdowns, and only 16 interceptions in his 3 year career at Oregon. pic.twitter.com/1tzc11PGkX

Mariota finished his Oregon career completing 66.8% of his passes for 10,796 yards, 105 touchdowns and just 14 interceptions. His rushing totals are just as impressive — he finished with 2,237 rushing yards on 6.6 yards-per-carry and 29 touchdowns. In 2014, he completed 68.3% of his passes, and had a 42:4 touchdown-to-interception ratio. Oh, and he won the Heisman Trophy.

At the moment, Mariota is being included with Florida State quarterback and 2013 Heisman Trophy winner Jameis Winston for the Draft’s top overall selection.

There are no shortage of NFL franchises who need quarterbacks. According to NFL.com, at least four teams could think about taking a quarterback in the top half of May’s NFL Draft. Some potential suitors and where they select in 2015 include:

Mariota will most likely go in the top five, unless pre-draft workouts and a poor combine performance affect his draft stock. The two teams most likely to take Mariota select at No. 1 and No. 2 in May.

The Tampa Bay Buccaneers went into this season with a platoon of journeyman Josh McCown and 2nd-year pro Mike Glennon. Neither impressed in a 2-win campaign, and the Buccaneers have an already made offense with Vincent Jackson, Mike Evans and Austin Sefarian-Jenkins ready for any potential rookie.

The Tennessee Titans could go into 2015 continuing to start LSU product Zach Mettenberger hoping that the tall, big-armed 6th rounder can give them half of what somebody like Ben Roethlisberger gives the Steelers. After a 2-win season in year one, head coach Ken Whisenhunt may gamble at the top of the Draft and take a quarterback, buying himself an extra year to try and develop his top draft choice. All options are in play for the Titans.

The New York Jets could take a quarterback, but owner Woody Johnson in his post-season press conference gave a small, but vocal vote-of-confidence for 2013 2nd-round pick Geno Smith, saying that his season finale against the Miami Dolphins where he posted a perfect quarterback rating was a sign that Smith had improved after being benched earlier in the season, and possibly enough for one more crack at the starting job.

After Sam Bradford was lost for the season, the Rams turned to Shaun Hill and Austin Davis to fill the void. Despite their quarterback struggles, the Rams finished 6-10. Normally, 6-10 is mediocre, but in a division with the Seattle Seahawks, Arizona Cardinals (both playoff teams in 2014-15) and the San Francisco 49ers (who made the playoffs from 2011-13), that’s better than most of the teams picking ahead of them. St. Louis seems to have mostly every position in place, except a quarterback.

Could the #Rams draft Marcus Mariota? One of our writers mocks a scenario where it could happen: http://t.co/IrrZywkQ64

In 2012, they traded down with Washington and allowed the Redskins to pick Robert Griffin III because Bradford was on the roster. In a division with Russell Wilson, the Rams may bite the bullet and put together a strong trade package should Mariota fall out of the top two or three.

There are doubts about Mariota’s ability to translate well into the NFL because of Oregon’s spread, up-tempo offensive system that values shorter throws and higher percentage plays more than traditional pro-style offensive plays, but Mariota has compiled enough film where he is one of the two standout quarterbacks — along with Jameis Winston — atop this year’s draft class.