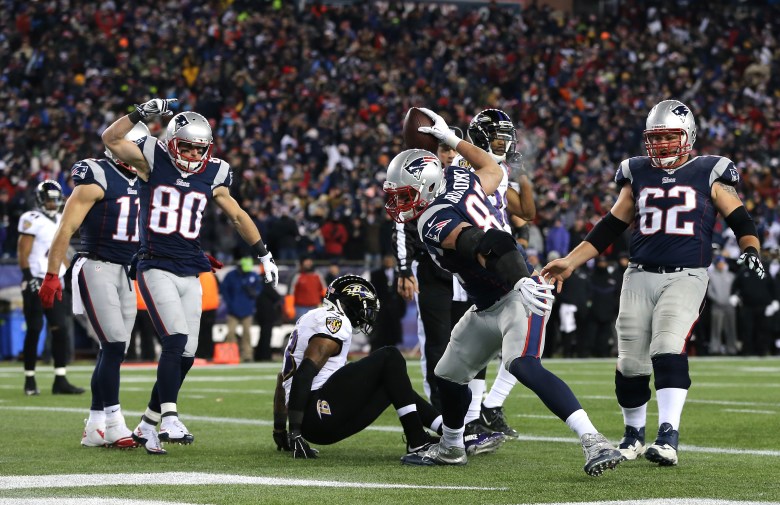 Rob Gronkowski and the Patriots will play in their fourth-consecutive AFC Championship Game. (Getty)

The AFC Championship Game is next weekend, so you know what that means.

Get ready to watch Tom Brady and the New England Patriots.

The Patriots defeated the Baltimore Ravens 35-31 Saturday to advance to their fourth-consecutive conference title game, which they will host at Gillette Stadium. They square off with familiar foe Andrew Luck and the Indianapolis Colts, who upset Peyton Manning and the Denver Broncos 24-13 on Sunday.

Luck has yet to beat the Patriots, losing all 3 matchups. In fact, they haven’t even been close. There was a 42-20 drubbing earlier this season and a 43-22 pasting in the playoffs a season ago. The other meeting ended in a 59-24 Pats’ W in Luck’s rookie year.

The Patriots have been in 9 of the past 13 championship games, winning 4. Their last victory came after the 2011 season, when they eventually lost 21-17 to the Giants in the Super Bowl.

The Colts haven’t been to the conference championship since the Manning days. The last time being after the 2009 season when they beat the Jets to advance to the Super Bowl.

The Patriots opened as an early 7.5-point favorite at the Westgate sportsbook in Las Vegas.