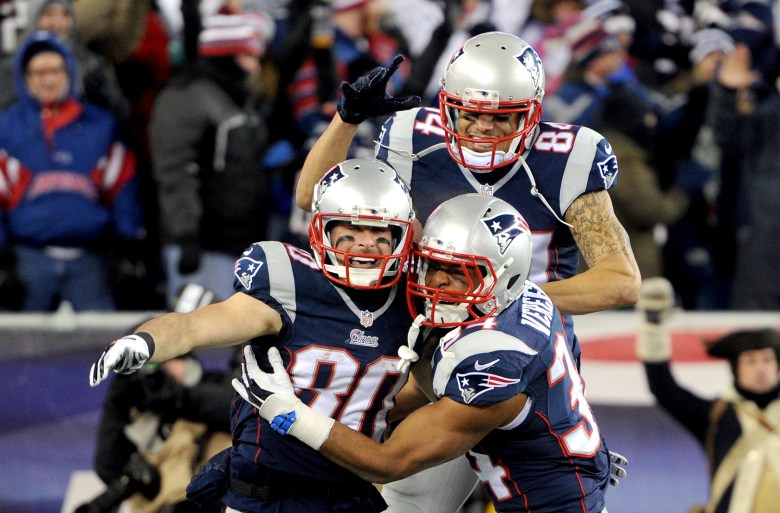 With a 35-31 win over the Baltimore Ravens on Saturday, the New England Patriots advanced to the AFC Championship Game. (Getty)

New England battled back twice from 14-point deficits to defeat the Baltimore Ravens 35-31 Saturday and clinch a spot in next weekend’s AFC Championship Game.

The Patriots took their first lead of the game with just over 5 minutes left and knocked down a final Hail Mary attempt to seal the victory.

Get the final stats and complete boxscore here.

Brady And Flacco Piled up The Numbers 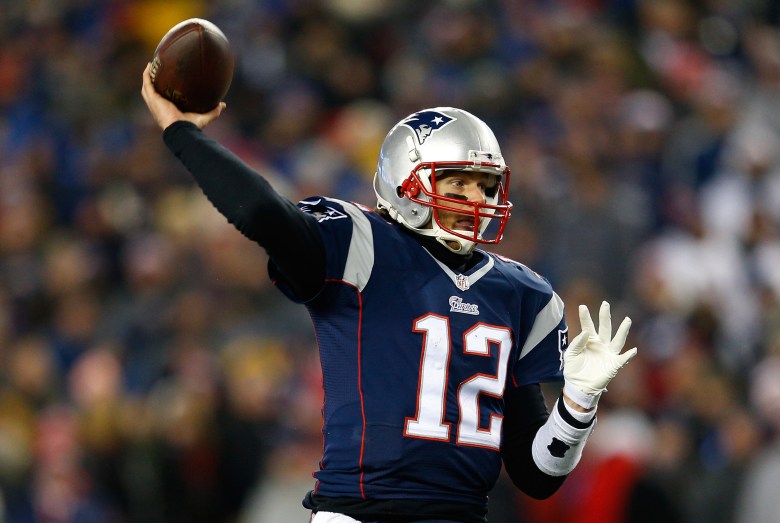 Patriots quarterback Tom Brady threw for 367 yards and 3 touchdowns, while his Baltimore counterpart, Joe Flacco, had 292 and 4 scores. Brady, who became the NFL’s all-time career leader in both postseason TDs and yards in the game, threw 1 interception and Flacco tossed 2. Flacco hadn’t thrown a playoff INT in his past 5 contests.

Rob Gronkowski led New England with 7 receptions for 108 yards and a touchdown. Torrey Smith had 3 catches for 62 yards to lead the Ravens.

Justin Forsett rushed for 129 yards on 29 totes to pace Baltimore, which held New England to 14 yards on 13 carries.

Joe Flacco connected with Kamar Aiken on a 19-yard touchdown to give Baltimore a 7-0 lead less than 3 minutes into the game.

The Ravens took the opening kickoff and drove 71 yards on 5 plays, including 4 of 4 passing for 69 yards for Flacco.

Here’s another angle of the TD:

On a 3rd and 5, Tom Brady hit receiver Danny Amendola for 9-yards and what appeared to be a 1st down.

The catch, though, was overturned by replay and the Patriots were forced to punt.

Flacco stayed hot and hit Steve Smith for a 9-yard score and a 14-0 Baltimore lead with 4:44 left in the 1st quarter.

After forcing a Patriots punt, Flacco directed a 79-yard drive for their 2nd touchdown in as many drives.

The Patriots Responded With a TD

Brady ran it in from 4 yards out late in the 1st quarter to close Baltimore’s lead to 14-7.

Brady hit tight end Rob Gronkowski twice for 62 yards on the drive, including a 46-yard to the Ravens’ 14.

The drive covered 78 yards in 8 plays.

Things Got Chippy After Brady Was Sacked

As expected in a game of this magnitude, tempers flared a bit in the 2nd quarter. Brady didn’t take kindly to getting sacked by Ravens linebackers Pernell McPhee and Terrell Suggs, and the QB let McPhee know it.

The players were separated and no flags were thrown.

On the play, Patriots center Bryan Stork injured his knee and wouldn’t return to the game. Ryan Wendell moved from right guard to center and Josh Kline came off the bench to play RG.

Brady hit Amendola for a 15-yard touchdown to tie the game at 14 with 3:37 left in the half. Amendola made the grab at the 12, broke a tackle, then went down the left sideline and dove into the end zone for the score.

Moments before the TD, Brady connected with Rob Gronkowski for a 23-yard gain and in the process set an NFL record for most career postseason passing yards with 6,595. Brady passed Peyton Manning (6,589 yards), whose Broncos play the Colts on Sunday.

The Patriots avoided disaster on the drive when Julian Edelman was stripped (see below), but the receiver was able to recover his own fumble.

The Ravens Scored Just Before The Half After Intercepting Brady

Owen Daniels caught an 11-yard touchdown from Flacco with 10 seconds remaining in the half, capitalizing on a New England turnover. It was Flacco’s 3rd TD pass of the game.

After forcing a 3rd-straight Baltimore punt, the Patriots had the ball late in the 2nd quarter, but Brady was intercepted by linebacker Daryl Smith at the Ravens’ 43 with just over a minute left.

The Ravens took advantage of a 20-yard pass interference play on Darrelle Revis to get into the Patriots’ red zone.

Justin Forsett caught a 16-yard swing pass from Flacco for a touchdown to give Baltimore a 28-14 lead early in the 3rd quarter.

The Ravens converted a 4th and 6 on the 70-yard drive. At the New England 36 on 4th, Flacco completed a 35-yard pass to Torrey Smith to the 1-yard line. Brandon Browner was called for a pass interference, but the Ravens declined. But Smith was called for a taunting penalty and the ball was placed at the 16, setting up Forsett’s TD.

New England Answered Right Back With a TD

Brady hooked up with Rob Gronkowski for a 5-yard score to cut Baltimore’s lead to 28-21 with 6:48 remaining in the 3rd quarter.

After going down by 14 points, Brady engineered a 70-yard drive, completing 6 of 8 passes for 65 yards to get the Patriots right back into the game.

Julian Edelman threw a 51-yard touchdown pass to fellow receiver Amendola to tie the game at 28 with just over 4 minutes left in the 3rd quarter.

Tom Brady took the snap and threw a lateral to Edelman, who hit a wide-open Amendola in stride down the sideline for the score.

Edelman was a former college quarterback at Kent State.

The Ravens Took The Lead Back With a FG

Justin Tucker’s 25-yard field goal put the Ravens back on top 31-28 with a little over 10 minutes left in the game.

On the possession after the Patriots tied the game at 28, Devin McCourty picked off a Flacco pass inside Baltimore territory at the 39. Baltimore held New England from getting any points and got the ball back.

Brady found Bradon LaFell for a 23-yard touchdown to give New England its first lead of the game, 35-31 with just over 5 minutes remaining in the 4th quarter.

During the drive, Shane Vereen caught a pass but lost control of the ball. The play was ruled a fumble, but replay showed Vereen’s knee was down before the ball came loose, enabling the Patriots to keep the ball.

Duron Harmon Intercepted Flacco in The End Zone With 1:39 Left

Duron Harmon picked off Flacco in the end zone late in the 4th quarter on a pass attempt to Torrey Smith.

The Patriots ran down the clock with 3 kneeldowns, but had to punt it back to the Ravens. With one last shot, Flacco’s 52-yard Hail Mary attempt was knocked down, ending the game and sending New England to the AFC Championship.

Preview: Patriots And Ravens Set to Clash Again in The AFC Playoffs

Another season, another playoff meeting between the New England Patriots and Baltimore Ravens.

Saturday the teams meet in Foxboro at Gillette Stadium for the 4th time since 2010.

The Ravens (11-6), who have won 2 of the 3 previous meetings, are coming off a 30-17 wild-card victory at Pittsburgh. The Patriots (12-4) have home-field advantage throughout the playoffs.

Since 2000, New England is 18-8 in the postseason, best among all teams. Baltimore is 15-7 over that time, second only to its Saturday opponent.

The Ravens get the job done on the road when it matters – they’re 10-5 in away playoff games. The Pats, however, are 4-1 in their past 5 home playoff games. That 1 loss was to John Harbaugh’s Ravens. 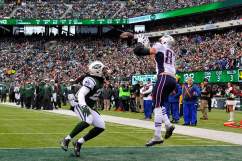 How to Watch Ravens vs. Patriots Live Stream Online