The Ravens will face the Patriots next week after defeating the Steelers in the Wildcard round.

Joe Flacco finished the game with 259 yards and two touchdowns, and Ben Roethlisberger had 334 yards, a touchdown and two interceptions.

The Steelers lead both yards and time of possession, but settled for too many field goals. The Ravens’ redzone defense played a huge role in this win.

Read on for highlights and go here for a live box score.

The game’s first points went to the Steelers on a 45-yard field goal from Shaun Suisham.

The Ravens Scored a Touchdown

The Ravens scored on a 5-yard run from Bernard Pierce.

The Steelers Added Another Field Goal

Field Goal is GOOD! 7-6 in #Pittsburgh

Suisham put one through again, this time from 22 yards out.

The Ravens Added Their Own Field Goal

Justin Tucker’s first of the night came from 28 yards out.

Another Field Goal for Pittsburgh

Suisham added another field goal, this one from 47 yards out.

If the Steelers hope to win this game, they’re going to have to figure out how to get touchdowns instead of just field goals. The Ravens have only put one touchdown on the board, but one more with no answer from the Steelers could be enough to decide the game.

Tucker was good from 45-yards out.

The Ravens Extended Their Lead</h2

The Ravens scored their second touchdown of the night on an 11-yard reception by Torrey Smith. Watch the vine above.

The Steelers Scored Their First Touchdown

Martavis Bryant scored on a 5-yard reception. Watch the vine above.

The drive started with Justin Forsett fumble, which was recovered by Stephon Tuitt at the Raven’s 45-yard line. The vine of the turnover can be seen above.

The Ravens Added Another Field Goal

Tucker was good again, this time from 52 yards.

Crockett Gillmore scored on a 21-yard reception. Watch the vine above.

The drive started with Terrell Suggs intercepting Ben Roethlisberger at the Steelers’ 24-yard line and the touchdown came on the next play.

After a decisive Sunday night showdown between the Cincinnati Bengals and the Pittsburgh Steelers, the seeding for the AFC playoffs is finalized and two AFC North teams will meet in the first round of the playoffs.

The AFC North champion Pittsburgh Steelers will host the Baltimore Ravens at Heinz Field Saturday, Jan. 3, at 8:15 p.m. ET. Television coverage will be on NBC.

Ben Roethlisberger and the Steelers finished with an 11-5 record earning the third seed in the AFC, while the Bengals fell to the five seed finishing with a 10-5-1 record after Sunday night’s loss. The Bengals will play the Colts in Indianapolis Sunday at 1:05 p.m. ET.

Baltimore earned a chance to compete in the playoffs after scoring 17 in the fourth quarter and rallying against Cleveland in a 20-10 victory. The Ravens received help to earn their playoff berth from the Kansas City Chiefs as they defeated the San Diego Chargers, 19-7, eliminating San Diego and securing the final playoff spot for Baltimore.

According to Vegas Insider, the Steelers open as a 3.5-point favorite over the Ravens for Saturday’s contest.

These two teams split the season series in blowout fashion, Baltimore winning at home, 26-6, on Sept. 11, and Pittsburgh winning at home, 43-23, on Nov. 2. This winner-take-all rubber match between rivals will be an intense matchup for a chance to advance into the divisional round. 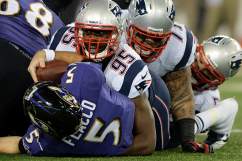 Steelers Jerseys & Apparel: The Most Badass Gear in the NFL Shop