Adonis Stevenson defends his WBC World light heavyweight title against brawler Sakio Bika on Saturday, April 4 at the Pepsi Coliseum in Quebec City‏, Canada. The fight will be broadcast by CBS at 3 p.m. ET/12 p.m. PT.

Haitian Adonis “Superman” Stevenson (25-1, 21 KOs) was last in action pummeling Dmitry Sukhotsky with a fifth-round knockout in December 2014. Prior to the Sukhotsky fight, Stevenson had outpointed Andrzej Fonfara and kayo’ed Brit Tony Bellow.

Stevenson is riding a 12-fight winning streak and sports an 81% knockout ratio, and he expects an early night on April 4.

“I know Bika will stop at nothing, so the fight will be spectacular and extremely offensive-minded,” Stevenon, 37 years old, said. “I predict that Bika will lose by knockout for the first time in his career.”

Former super middleweight world champion Sakio “The Scorpion” Bika (32-6-3, 21 KOs), of Cameroon, is coming off back-to-back fights against rival Anthony Dirrell. The two fought to a draw in their first encounter; Dirrell took the August 2014 rematch by decision.

Bika, 35 years old, has campaigned exclusively in the super middleweight division; April 4 will be his first fight as a 175-pound light middleweight.

“After all these years fighting at 168 pounds, it was becoming increasingly difficult to make weight and that was a major factor in my defeats,” Bika said. “I see no problem making the jump to light heavyweight to face Stevenson and I do not feel I’ll be at a disadvantage because the champion made this transition successfully himself less than two years ago against Chad Dawson.” 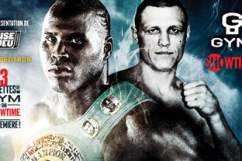