It’s hard to believe, but Selection Sunday is less than a month away.

It’s that time of year where upsets are expected and underdogs are given new life. Where regular season records, win streaks and rankings are basically obsolete and the team that came to play that day shines.

On March 15, CBS will broadcast Selection Sunday and reveal the 68 teams moving on to the dance this year.

But leading up to that and, of course, beyond that, there are some key dates to mark down on your calendars.

Here are the key dates for March Madness 2015: 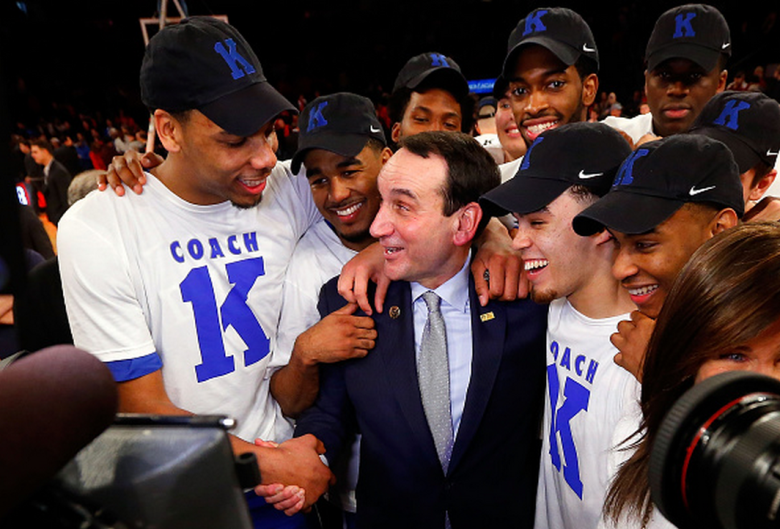 Kentucky is the only team in the land of the unbeaten. And while Wildcats’ Head coach John Calipari and his squad are in the pursuit of perfection, Duke’s coach Mike Krzyzewski is looking to claim his fifth National Championship title. Earlier this season Coach K became Coach 1K and Kounting when he reached his 1,000th career win – the first for a Division I men’s basketball coach in NCAA history.

Wisconsin (23-2) will look to keep up the momentum in hopes to get past the Final Four hump and into the championship game. And VCU’s coach Shaka Smart will look to revamp his offense following the loss of senior guard Briante Weber to a torn ACL and meniscus and a sprained MCL.

There’s still lots of action to be had in college hoops before the final day of the regular season. 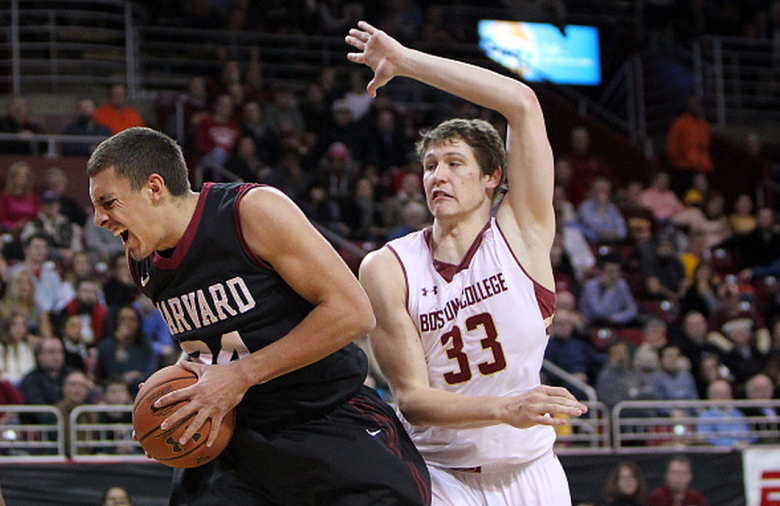 Jonah Travis #24 of the Harvard Crimson reacts as he holds on to the ball against Patrick Heckmann #33 of the Boston College Eagles during the game at Conte Forum on January 14, 2015 in Chestnut Hill, Massachusetts. (Getty)

Keep in mind the Ivy League does not hold a conference tournament because the regular season champion will be the first automatic bid awarded. Harvard and Yale are tied for the No. 1 ranking in the Ivy League – both post a 7-1 record in league play.

If you look at their performances overall, Harvard has a better record, 17-5, with a 77.3 win percentage. Yale is 18-7 overall with a 72.0 win percentage. And in their first meeting on February 7, Harvard traveled to Yale and came away with the win, 52-50. The two will meet again on Harvard’s home court March 6.

If Harvard were to win the second game against Yale, clenching the regular season sweep, but both still ended up tied for first in the rankings, they would compete in a one-game playoff.

Both teams would still be crowned as co-champions of the Ivy League, but the one-game playoff, which would be held at the University of Pennsylvania’s Palestra Arena, determines which one comes away with the automatic bid to the tournament.

There have only eight men’s basketball seasons that have ended in a on-game playoff. The most recent was the 2010-11 season between Harvard and Princeton. Princeton came out victorious with a bid the tourney, and fell just shy of defeating 4th-ranked Kentucky in the second round, losing 59-57.

March 11- 15 – Atlantic 10 (A-10) Conference Tournament at the Barclays Center in Brooklyn, New York

March 3- 10 – Horizon League Conference Tournament at various campus sites the first round, the quarterfinals and semifinals at the top seed’s home court and the final at the top remaining seed

March 11- 14 – Mid-American Conference Tournament at various campus sites the first round and the rest at Quicken Loans Arena in Cleveland, Ohio 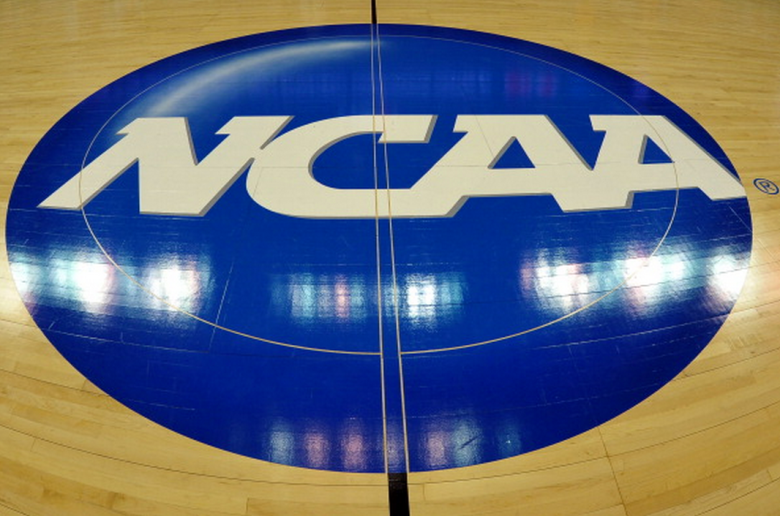 A view of the NCAA logo during the Second Round of the 2014 NCAA Basketball Tournament at PNC Arena on March 21, 2014 in Raleigh, North Carolina. (Getty)

Selection Sunday is the first time all 68 teams going to the tournament are revealed. The first 32 teams are those that have won their conference tournament championship. So not only do those teams go home with a conference title in their back pockets, but also an automatic bid to the dance.

As mentioned, the Ivy League regular season champ gets an automatic tournament bid. And as for the remaining 36 teams, the selection committee spends days leading up to Sunday to decide which teams they will be awarding an at-large bid.

Once the final decisions have been made, the seeds and brackets are released to the public. You can check out a blank bracket here: (Click the image for the option to download a printable version.) 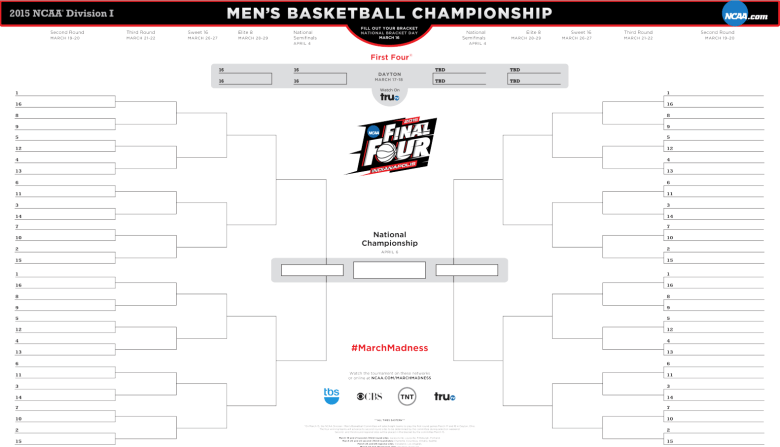 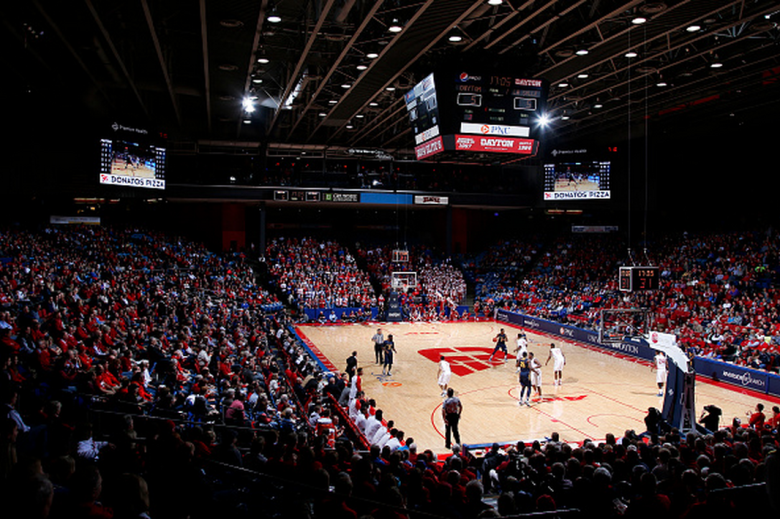 The First Four, which started in 2011, refers to the number of games played, not the number of teams. The four games are held to determine which four teams will be advancing to the Round of 64.

The games consist of the lowest four at-large bid teams versus the lowest four automatic bid teams. Despite how the First Four are determined, the teams are not usually the lowest eight teams in the field with regards to rankings during the regular season. 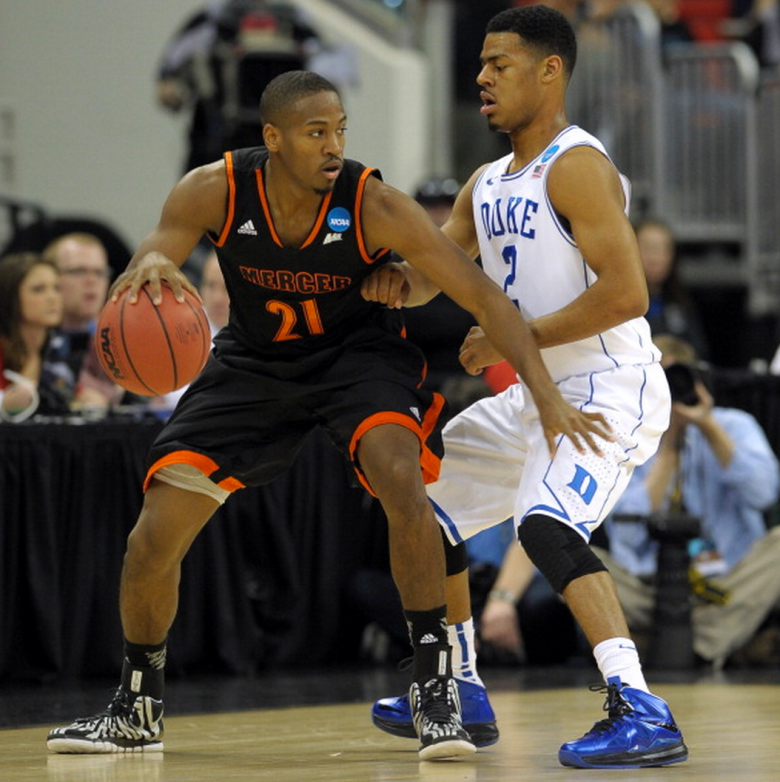 Langston Hall #21 of the Mercer Bears dribbles against Quinn Cook #2 of the Duke Blue Devils during the Second Round of the 2014 NCAA Basketball Tournament at PNC Arena on March 21, 2014 in Raleigh, North Carolina. Mercer defeated Duke 78-71. (Getty)

The Round of 64 – aka, arguably the two most exciting days of the year in sports. This is when the upsets happen because the No. 1 seed plays the No. 16, the No. 2 plays the No. 15, and so on and so forth in every region. It’s 32 games within a 48-hour time span that showcases who came to play and why rankings don’t always determine the final outcome. 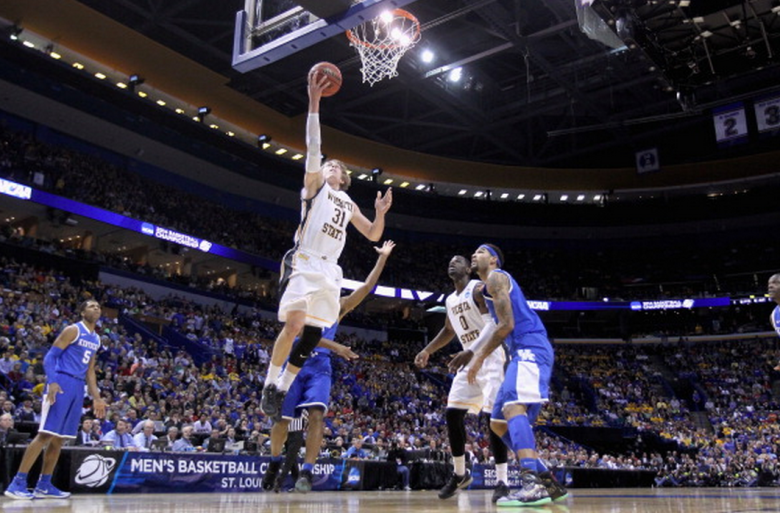 Ron Baker #31 of the Wichita State Shockers shoots the ball against the Kentucky Wildcats during the third round of the 2014 NCAA Men’s Basketball Tournament at Scottrade Center on March 23, 2014 in St Louis, Missouri. (Getty)

Known as the Round of 32, this is when things get interesting and everyone’s bracketology skills are really tested. This is the round where the victors of the second round have to gear up and get ready for their next opponent with less than two days to prepare. The teams who won on Thursday play in eight games on Saturday and Friday’s winners follow up on Sunday.

Second and third round locations include: 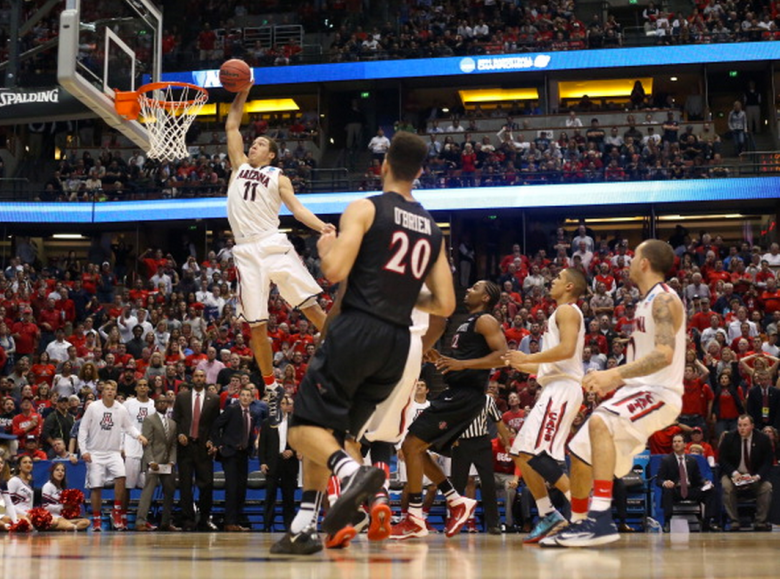 Aaron Gordon #11 of the Arizona Wildcats dunks the ball in the second half while taking on the San Diego State Aztecs during the regional semifinal of the 2014 NCAA Men’s Basketball Tournament at the Honda Center on March 27, 2014 in Anaheim, California. (Getty)

The Sweet 16 round, which is also known as the regional semifinals, kicks off the second week of the tournament. Four games are played on Thursday and the other four are held on Friday. Then, similar to the second and third rounds, it’s a quick turn around to the Elite Eight for those teams that won. 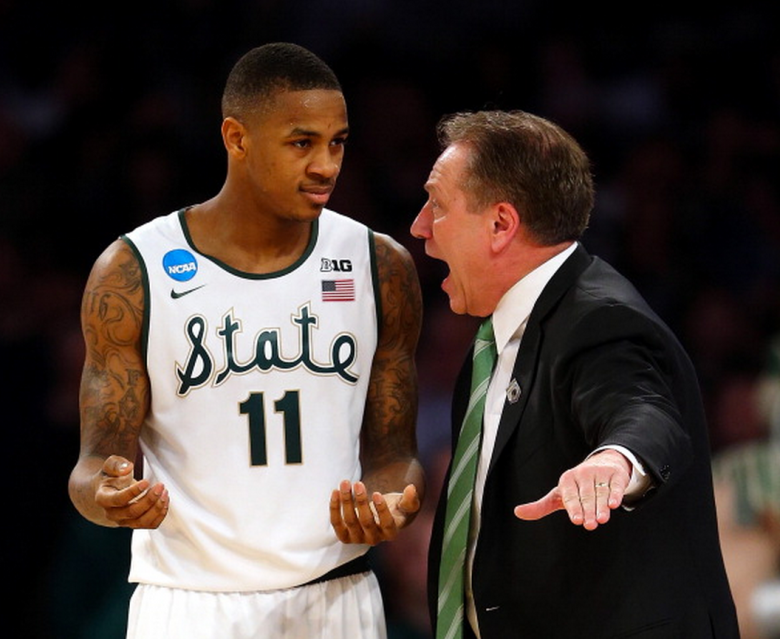 Head coach Tom Izzo of the Michigan State Spartans talks with Keith Appling #11 against the Connecticut Huskies during the East Regional Final of the 2014 NCAA Men’s Basketball Tournament at Madison Square Garden on March 30, 2014 in New York City. (Getty)

Like round two and three, the regional finals – Elite Eight – games immediately follow the Sweet 16. Thursday’s victors play on Saturday and Friday’s winners play on Sunday. And the four regional champs makeup the Final Four teams.

Sweet 16 and Elite Eight locations include:

Head coach Tom Izzo of the Michigan State Spartans talks with Keith Appling #11 against the Connecticut Huskies during the East Regional Final of the 2014 NCAA Men’s Basketball Tournament at Madison Square Garden on March 30, 2014 in New York City. (Getty)

The Final Four notes the third and final week of the March Madness tournament. The two games take place on Saturday, and the matchups of which regional champion will play which are determined by the overall rankings of the four No. 1 ranks in the original bracket. 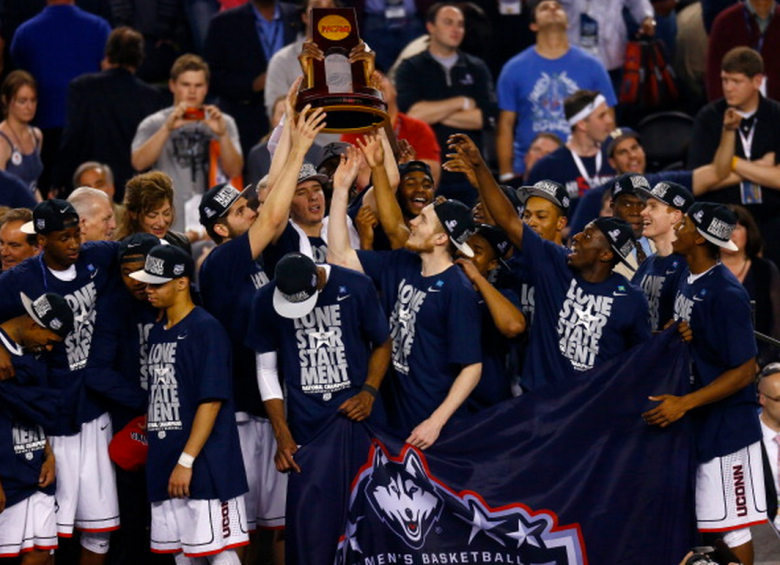 The Connecticut Huskies celebrate with the trophy after defeating the Kentucky Wildcats 60-54 in the NCAA Men’s Final Four Championship at AT&T Stadium on April 7, 2014 in Arlington, Texas. (Getty)

Just two days after advancing past the Final Four, two teams will come to face-to-face with each other, both vying for the National Championship title, and of course, bragging rights. This is where the journey to the tourney ends and one team is crown March Madness Champs.