Chris Holtmann has led Butler back to the NCAA Tournament in his first season as head coach of the Bulldogs.

Holtmann coached Butler to a 22-10 season, finishing second in the Big East and earning an at-large bid to the NCAA Tournament. The No. 6 Bulldogs will face the No. 11 Texas Longhorns in the Round of 64.

Here’s what you need to know about Holtmann:

1. He Took Over the Team Right Before the Season Started

Chris Holtmann on Rankings and Butler's season so far | BU:30Butler coach Chris Holtmann sat down with BU:30 to discuss his perspective on Top 25 rankings, the Bulldogs' season so far, and how this year's team compares to Butler teams of the past. http://BU30sports.com @BU30sports2014-12-15T03:01:53.000Z

Chris has really gotten this team to respond to his coaching in a difficult situation that could have gone in a lot of different ways. I think he’s provided very good leadership for them. You can see that in his interactions with them.

You feel grateful, you feel honored. You also feel a sense or responsibility. We know we have some work to do in the Big East. But who Butler is as a university resonates with me and resonates with my family.

The reason for Miller’s leave has not been made public. Miller became head coach last season, taking over for Brad Stevens, who moved on to lead the NBA’s Boston Celtics. Miller was an assistant coach under Stevens and was a point guard for the Bulldogs.

2. He Left a Head Coaching Job to Become a Butler Assistant

Holtmann joined Miller’s staff in 2013 after two seasons as head coach at Gardner-Webb. During his time at Gardner-Webb, Holtmann led the Runnin’ Bulldogs to a school-record 21 wins and a trip to the postseason College Insider.com Tournament. He said leaving the school was difficult, telling the Big South Network:

My staff and players are the reason we had a record-setting year and went to the postseason for the first time. The future here is very bright and those guys are responsible for the great optimism around our program right now. The opportunity I am taking at Butler University, working for Brandon Miller, is a wonderful one that was just too strong to pass up for my family. Gardner-Webb University and this great community will always be special to the Holtmann family

Holtmann previously was an assistant coach at Ohio University and Gardner-Webb.

3.He Isn’t Too Happy With President Obama

Butler coach Chris Holtmann says most are picking Texas, "including our president, which is why it's the last time I ever vote for him."

President Barack Obama picked Texas to beat Holtmann’s Bulldogs in his NCAA Tournament bracket. Holtmann said at a press conference, that he will never vote for Obama again.

But Holtmann did acknowledge his team has a tough game ahead of them, telling reporters:

You look at the seeding and I notice not many people are picking us, including our President. So that’s going to be the last time I vote for him. … Texas presents great challenges and we recognize the team that they are. I think somebody told me the other day, these types of seeds are typically 50/50 games. We recognize, I think, why a lot of people have picked Texas. They’re a terrific team, come from a terrific conference. Having said that, I know our guys are excited about the challenge.

4. He Was an All-American at Taylor University

Holtmann, a Nicholsville, Kentucky native, played point guard for Taylor University in the NAIA. He was the team’s captain in 1993-94, earning All-American honors and leading his team to a No. 1 ranking and the NAIA Tournament.

He played alongside John Groce at Taylor, and would later coach under him at Ohio. Groce is now the head coach at Illinois.

5. He is Married & Has a Young Daughter

Holtmann and his wife, Lori, have a 4-year-old daughter. They met while he was an assistant coach at Taylor University, according to WTHR-TV. They were married in 1999.

Lori talked to the Indianapolis Business Journal about what it’s like to be a coach’s wife:

The highs are so high, the lows are so low. Early in our marriage, when we would lose a game that we should have won, I knew exactly which games I needed to make a bed for him on the couch. I knew he wasn’t going to sleep. I knew he couldn’t lay in bed, that he would just be going over it. … Being a coach’s wife is not for everybody. If you’re looking for the white picket fence, the husband-home-at-6-o’clock kind of life, you’re not going to get it. But the adventure of it is second to none. 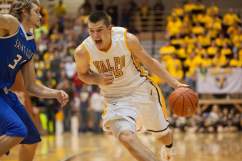