After starting from the 36th position, Jimmie Johnson and the No. 48 car climbed to a mid-race lead and ended up taking the checkered flag at Atlanta Motor Speedway in the folds of Honor Quiktrip 500. The win was Johnson’s 71st victory on his career, and his 21st on a mile-and-a-half track — the most in NASCAR history.

Dating back to last year, this was the 5th consecutive race where Kevin Harvick finished in the top-five — he finished 2nd in the Daytona 500.

Race Notes:
– The race’s start was delayed a few minutes because of track conditions due to the weather in Atlanta
– There were eight caution flags
– There was a crash involving Ryan Newman, Jeff Gordon, Denny Hamlin and Jamie McMurray on Lap 257
– McMurray, Hamlin and Gordon did not finish the race
– Harvick finished less than two seconds behind Johnson — the 2nd consecutive race where he finished less than two seconds behind the eventual winner

Newman, Gordon, Hamlin & McMurray Were Involved in a Wreck On Lap 257

There was a crash involving Clint Bowyer, Jeff Gordon, Denny Hamlin and Jamie McMurray on Lap 257. Bowyer’s car allegedly spun out, hitting into Hamlin, who then went crashing into the wall. Gordon and McMurray were caught in the crossfire and McMurray’s No. 1 car and Gordon’s No. 24 car had the most damage.

McMurray and Gordon did not finish the race.

Can Joey Logano Start the Season With Consecutive Victories?

24-year-old Joey Logano started the 2015 Sprint Cup Series by becoming the 2nd youngest winner of the Daytona 500 — the youngest was Trevor Bayne, who won the race at just a ripe age of 21 in 2011. Logano looks to carry his early season momentum with him into Atlanta Motor Speedway and the Folds of Honor Quiktrip 500.

Veterans Jeff Gordon, Jimmie Johnson and Dale Earnhardt Jr. all had strong races in Daytona, but ultimately came up short. The Folds of Honor Quiktrip 500 is a race usually dominated by veteran drivers. The last young driver — by average NASCAR standards — to take the checkered flag this early in the season in Atlanta was Carl Edwards in 2008 — and by then he was already a Sprint Cup Series driver for three years.

Last year Kasey Kahne took home the checkered flag in Atlanta, which was an incredibly vital piece of the puzzle that helped him land a spot in the Chase at the end of the year.

How to Watch Folds of Honor Quiktrip 500 Live Stream Online 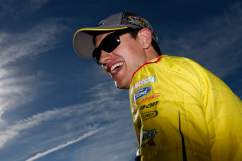