Jean Pascal takes a right hand to the head from Sergey Kovalev. (Getty)

Sergey Kovalev successfully defended his WBO, WBA and IBF light heavyweight world titles, and his unblemished record, by stopping Jean Pascal on Saturday at the Bell Centre in Montreal, Canada.

The knockout came one minute into the eighth round of the action-packed fight when Kovalev landed a brutal right hand, causing referee Luis Pabon to wave off the contest. Pascal had been put down once, in the third round of the bout.

Jean Pascal proved to be one of Kovalev’s toughest challenges to date, withstanding the Russian’s power and landing repeated counter rights to the head and body. But despite Pascal taking the offensive in the fifth and sixth rounds, Krusher’s arsenal was too much for the game Canadian to overcome.

Kovalev came out patient at the start of the fight, using his jab to establish the distance and to pressure Pascal on to his back foot. Kovalev’s lead right was landing consistently, and the round ended with some good exchanges.

Action picked up in the second round after a mostly feeling-out opening frame as Kovalev started to find his range and timing.

Pascal displayed incredible resilience, taking major punishment in the third round. A hard right hand from Kovalev forced Pascal to lean against the ropes for balance, and the ref rightfully ruled it a knockdown. Kovalev looked to finish the fight,but Pascal was saved by the bell.

Kovalev was on the hunt in the fourth round, landing shot after shot, looking to close the show. But he was punished for his over-eagerness and carelessness when Pascal surprised him with a right hand to the face that sent Krusher stepping back and put him on the defense for the rest of the installment.

Pascal appeared to be on to something in the fifth and sixth rounds, on the prowl and countering a frustrated Kovalev. But Krusher got it together for the seventh round, putting his jab back to work and finishing the round with a big left hook.

The eighth, and final, round started off awkwardly with Kovalev slipping in the middle of the ring. Action took Pascal to the ropes where Kovalev unloaded a huge right– the end looked in sight. Pascal scrambled to escape from the corner, sending Krusher to the ground for a second slippage. But Kovalev dusted himself off, charged Pascal into the corner landing a devastating right hand, and that was all the ref need to see.

Lopsided CompuBox numbers had Kovalev landing 112 of 471 punches thrown, and Pascal landing 68 of 200.

Kovalev (27-0-1, 24 KOs) entered Saturday’s bout coming off the biggest fight of his career, having shutout Bernard Hopkins in one of the finest displays of the sweet science in recent times. Previous to the Hopkins fight, 31-year-old Kovalev had knocked out Australian Blake Caparello and Cedric Agnew of Chicago.

Prior to Saturday, Jean Pascal (29-3-1, 17 KOs) had been last in action against Roberto Bolonti. That fight was controversially ruled a ‘no contest’ when Pascal punched out Bolonti while coming out of a clinch. Previous to that, 32 year-old Pascal had dispatched Lucian Bute, George Blades, and Aleksy Kuziemski since suffering his first career-defeat to Bernard Hopkins in 2011.

With the victory, Kovalev continues checking off light heavyweights from his list of potential challengers. Keen to unify the four major titles of the division, Kovalev’s crosshairs remain fixed on WBC champ Adonis Stevenson. Other names being thrown around include Nadjib Mohammedi and Andre Ward.

A disappointed Jean Pascal told HBO’s Max Kellerman after the fight that he would demand a rematch against the hard-hitting Ruski.

“Honestly, it was a good fight,” Pascal said. “It was an action fight for the fans. I tip my hat to Kovalev. He is a champion. I don’t know why the referee stopped the fight. It was a great fight. I was in the fight from the first round. We should do it again. I should have a rematch. I am a crowd-pleaser. At Centre Bell I am always going to give the fans a great fight. I will be back.”

On the undercard: Vyacheslav Glazkov out-pointed Steve Cunningham in an uninspired 12-rounder to earn a unanimous decision win and remain undefeated; and Isaac Chilemba made easy work of a listless Vasily Lepikhin on his way to a one-sided decision victory. 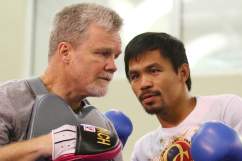 Freddie Roach: Our Game Plan Is to Win Every Round

Sergey Kovalev vs. Jean Pascal (scores are not official)

(Refresh this page throughout the fight for round-by-round updates)

Round 1: Here we go! Pascal wears black with white and red stripes, Kovalev in red trunks. The fighters meet in the middle of the ring and Pascal takes to the perimeter. Pascal moving, Kovalev measures with a jab. Kovalev feinting, feeling out. Pascal observes. Pascal measures a jab to the body. Kovalev stalking. Halfway point of round,  right from Kovalev behind a jab. Jabs to the body from Kovalev. Pascal charges and they clinch. Back the center. Kovalev jab. Minute left. Right, Kovalev is short.  Kovalev throwing jabs to the body. Pascal misses with big right. 10-9 Kovalev.

Round 3: Kovalev comes out jabbing, Pascal trying to pressure. In the middle of the ring, Pascal charges and misses right hand. They clinch and break. Left from Kovalev. Right to the body Kovalev. Kovalev misses with combination. Pascal lands right hand, and then one on the cup. Right from Pascal. Another. Right from Kovalev rocks Pascal, then left hook. Gets his head together, Kovalev looking for openings. Left hook Kovalev, jab to the body from Pascal. Right from Kovalev to the head. Jab to the body from Krusher. Right Kovalev KNOCKS DOWN Pascal against the ropes!  30-26 Kovalev

Round 5: Meeting in the middle, they vie for openings. Kovalev trying to close the distance. Pascal jabs. Both looking, not throwing. Jab, Kovalev. Kovalev measuring, waiting. Pascal charges and wings a wide right. Kovalev with right behind double jabs. Pascal threatens with jabs to the body. Kovalev left and right to the body. Pascal charges and pushes Kovalev into the corner, Kovalev pushes out. Big right from Kovalev, then right from Pascal. Right to the body from Pascal. Kovalev looks impatient. Pascal’s best round. Left from Pascal to finish round. 49-45 Kovalev

Round 6: Pascal comes out punching. Kovalev takes control. Tactical boxing since the last couple of rounds. Jab Kovalev. Right hand counter from Pascal. Left to body, right to head from Pascal. Kovalev jabs to the chest. Pascal misses right. Kovalev working the jab to body and head, using it as a range finder. Right from Pascal. Minute left in the round, Pascal more confident. Jab Kovalev. Another. Big right from Kovalev. Pascal land left hook on the chin. 59-54 Kovalev

Round 8: Kovalev slips in the middle of the ring. He’s ok. Kovalev charges with a combination, but doesn’t land. Left hook from Kovalev. Right Kovalev. Pascal in trouble. Kovalev slips. Not a knockdown. Back at! Huge right hand from Kovalev and…and the ref waves the fight off. Krusher wins!

Manny Pacquiao: I Will Win May 2

Read More
Boxing, HBO Sports
Sergey Kovalev stops Jean Pascal in the eighth round of their Saturday melee. We have your wrap-up, details, and highlights.