The Kentucky Derby has utilized its starting gate since 1930.

The post positions for this Saturday’s 2015 Kentucky Derby were determined.

*UPDATE*
The original 2015 Kentucky Derby field has been slightly changed before Saturday due to the scratch of No. 11 Stanford.

Hall of Famer Nick Zito’s Frammento will replace Stanford and will go off at post-position No. 20. Each horse from 12-20 will move up one post-position.

*UPDATE 2*
Zayat Stables has announced that El Kabeir will be scratched from tomorrow’s Kentucky Derby.

El Kabeir will be scratched from the Kentucky Derby. @jazz3162 @JustinZayat

The history of the Kentucky Derby starting gate dates all the way back to 1930.

The Kentucky Derby Draw is always an exciting time because in a race that’s a mile-and-a-quarter in length, these 20 selected horses — up to this point — have never experienced a race this long before. It is also an important time for gamblers planning on betting Saturday’s race because the post-position draw significantly alters wagering strategies before the race.

So, what is the post-position that almost every trainer, owner and jockey doesn’t want? The answer is post-position No. 1, which is the inside of the track, and has historically been a tough spot for horses to win the Derby. In the grand scheme, that makes no sense because No. 1 has had eight Kentucky Derby winners, which is tied for second most of any Kentucky Derby starting position. However, the last winner from starting position No. 1 was Ferdinand in 1986, almost 30 years ago

The two post-positions that have had the most winners are No. 5 and No. 10 with nine each. Last year’s Kentucky Derby winner California Chrome went off at No. 5. In 2005, Giacomo went off at 50/1 and won the Kentucky Derby from post-position No. 10. The other post-position with historical success is No. 8, which has had two winners in the last 10 years with Barbaro in 2006 and Mine That Bird in 2009.

The only post-position to never have a Kentucky Derby winner? No. 17. One of these years…

From September until April, horse racing goes through a period known as the “Road to the Kentucky Derby,” and through a set of races where points are given to the top finishers in each race, the top 20 horses at the end of this time period end up qualifying for the Kentucky Derby. From the time the Road ends until the day of the Draw, a trainer or owner may decide to pull a horse that, at the time, is in contention out of the race. The horse is then usually replaced.

This year, Keen Ice trained by Dale Romans was a late addition to the Kentucky Derby.

This year’s 20-horse field projects as the best field that the Kentucky Derby has seen in some time, and it is headlined by quality horses such as American Pharoah and Dortmund, but other horses who can make just as much noise as well like Materiality and Firing Line. 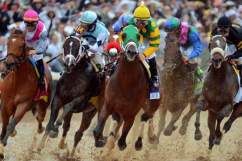 Who Are the Horses in the 2015 Kentucky Derby?