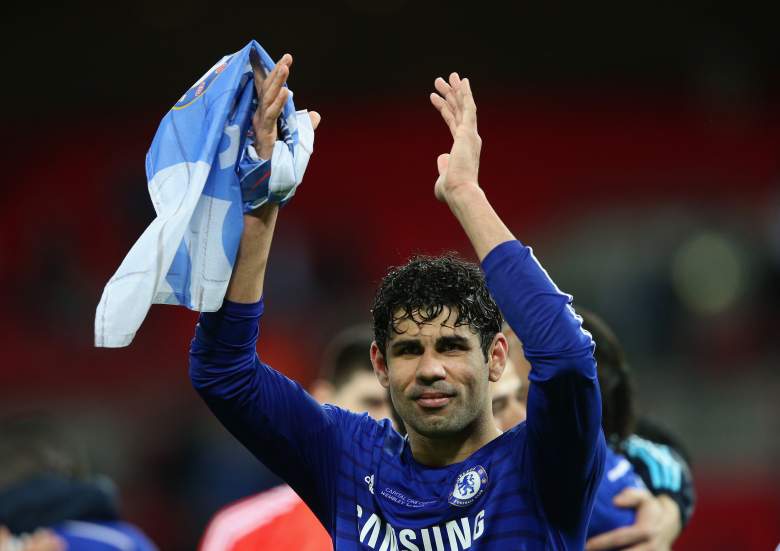 Diego Costa has been in excellent form for Chelsea this season. (Getty)

Diego Costa has quickly risen to be one of those most well-known soccer players in the world. Spending most of his career in anonymity, no one has been more prolific than the Spanish international in the last two years.

Here’s what you need to know about the 26-year-old star.

1. He Has Played for Both Spain & Brazil in His International Career 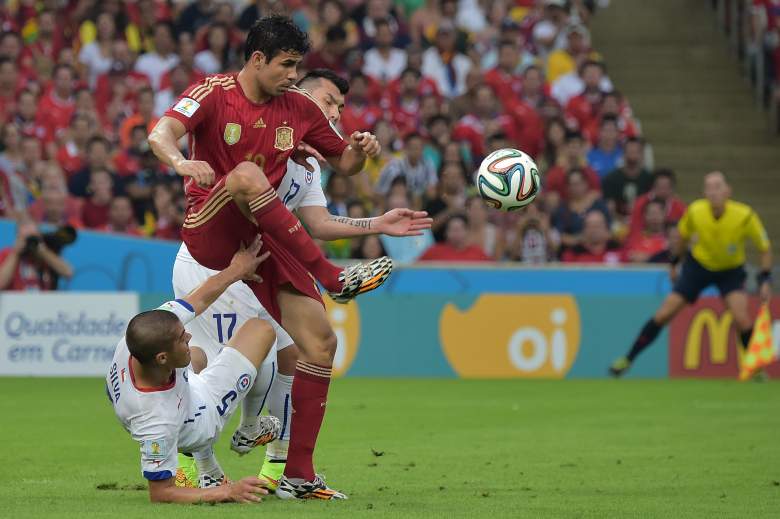 Diego Costa had a World Cup to forget for Spain as they crashed out in the group stage. (Getty)

Costa was born in Lagerto, Brazil, a city with about 100,000, to Brazilian parents. Named after Diego Maradona, Costa moved to Portugal to play for F.C. Braga at age 18 and eventually gained Spanish citizenship.

But Costa initially played for Brazil, appearing in a pair of friendlies in 2013. Had he appeared in a competitive match, he would not have been allowed to play for Spain, which he did at the 2014 World Cup in Brazil (it didn’t go well). Costa has seven caps for Spain, scoring just once. 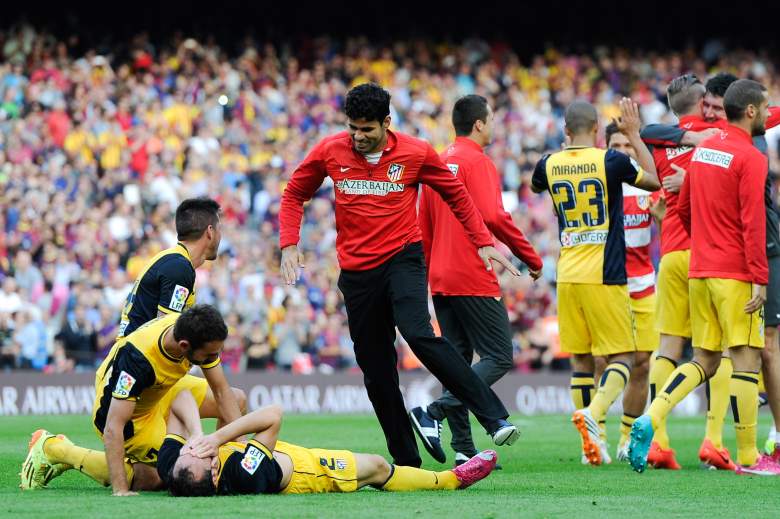 Diego Costa celebrates with his teammates after winning the Spanish League last May.

Costa scored a remarkable 27 goals in 34 league appearances, including a famous goal at the Bernabau that gave Atletico its first win against Real Madrid in La Liga since 1999. His goals kept Atletico in the title hunt all season long.

Atletico went into the final weekend with a 3-point advantage over Barcelona. It was a winner-take-all scenario in the final match, but Atletico held Barcelona to a 1-1 draw to secure the title, its first since 1996.

3. He Signed With Chelsea For $47 million Last July 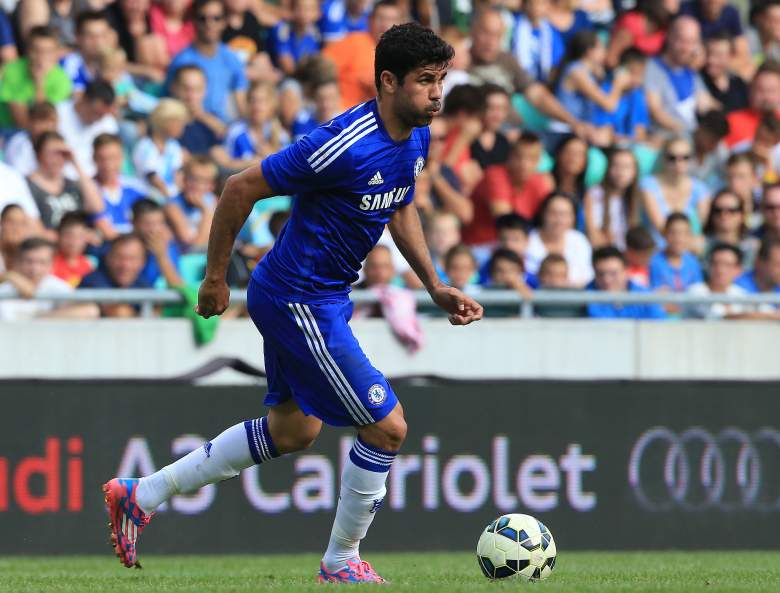 His goals for Atletico got the attention of all the big-spending clubs, including London-based Chelsea.

The Blues sealed the deal last July, beating out fellow Premier League powers Arsenal and Manchester United for his signature. Chelsea paid Atletico $47 million for his services and he signed a 5-year contract for about $11.5 million per season. The transfer fee is widely seen as a massive bargain.

Afterward, Atletico chairman Enrique Cerezo acted like the scorned lover, proclaiming they only got half of his value. He is indispensable to Chelsea with the form he is in, as he is tied for first with Tottenham’s Harry Kane with 19 Premier League goals. Thanks to that form, Costa is now rated 85 in FIFA 15’s popular Ultimate Team website futhead.com

4. He Got a 3-Match Ban for Stomping on Liverpool’s Emre Can

At 6-foot-1, 180 pounds, Costa plays with a physical style that is designed to apply constant pressure on his opponents. One night in January, however, he went too far.

In Chelsea’s recent Capital One Cup semifinal with Liverpool, Costa stomped on the ankle of Liverpool’s Emre Can. Although he wasn’t sent off for the incident, Costa, who has been sent off four times in his career, received a three-match ban for the act.

Chelsea won the game and went on to win the Cup.

5. He Recently Suffered an Ankle Injury 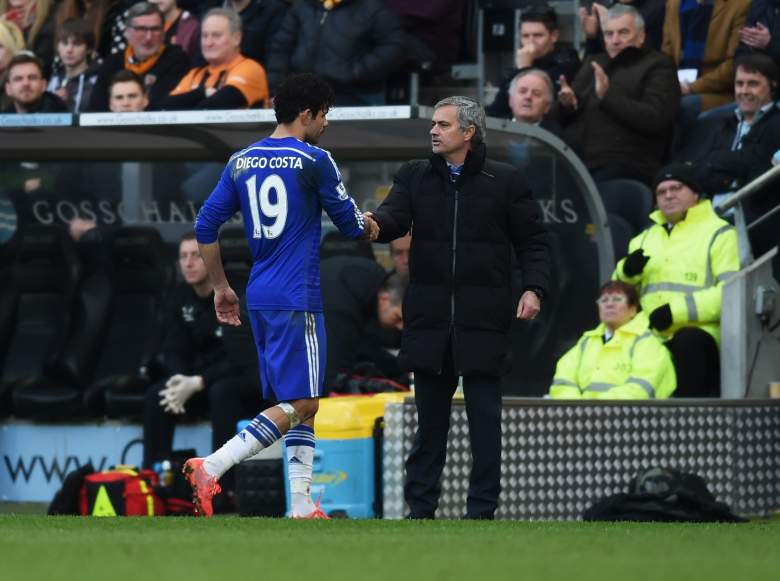 Diego Costa shakes hands with manager as he is substituted during the match with Hull. (Getty)

After suffering recurring hamstring injuries over the past 18 months, Costa was replaced in Chelsea’s 3-2 win over Hull March 22 with the same ailment. The injury was a level 1 hamstring tear on his left leg, the same side that caused him to miss time in September and October for the Blues.

He was removed from the Spanish National Team as a result for its upcoming Euro 2016 qualifier, continuing to halt his progress on the international stage. As with most hamstring injuries, there is no timetable for his return. 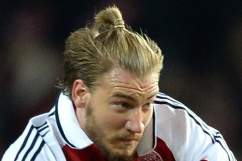