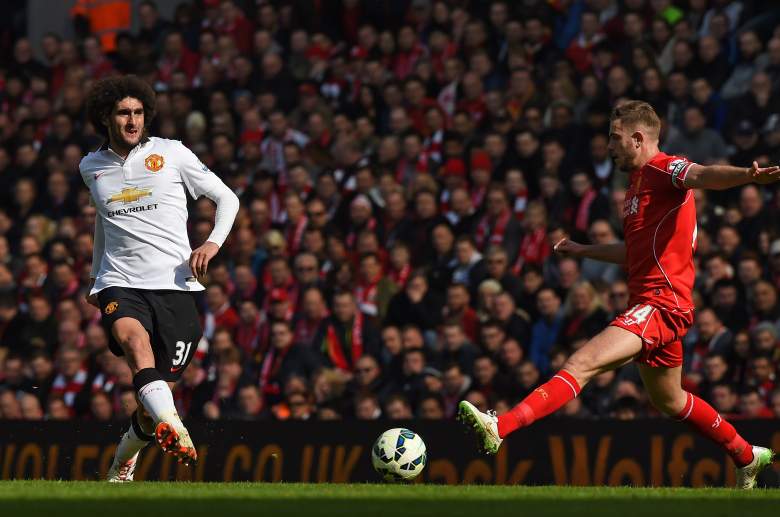 Sergio Aguero gave City the lead in the 8th minute, but it was all downhill from there for the visitors. Cut to shreds by a clinical Manchester United midfield and attack, City yielded four straight goals before Aguero pulled a goal back in the 89th minute, his 100th for the club in just 159 appearances.

The result will pile on the pressure of under-fire manager Manuel Pellegrini, whose team has won just two of their last six games.

In a bizarre stat, United are now unbeaten in their last 16 games (11 wins, five draws) that Young has started. Young delivered a fine performance with a goal and two assists Sunday.

Read on for a full recap.

Manchester City dominated the opening stages of the game and were rewarded in the 8th minute as Sergio Aguero got on the end of a cross to give his team the lead. The goal was Aguero’s 18th goal of the season and has scored in four straight Manchester Derbys.

[HD] Ashley Young with the first goal after putting the ball into the roof of an empty net #MUFC. pic.twitter.com/da0z9EpiQQ

Completely against the run of play, Manchester United tie up the game after some nice work by the Red Devils. Young pulls the spin-o-rama move to finish excellently past Manchester City goalie Joe Hart. The goal was Young’s third of the EPL season.

Fellaini caps a wild 30 minutes to the start of the match with a classic Fellaini goal. He rises highest to a pinpoint cross by Young and heads the ball past Hart. United have completely turned the match around and are threatening for more goals.

Juan Mata scored his eighth Premier League goal of the season in the 67th minute, calmly finishing off a counter attack move off a nice pass by Wayne Rooney to put Manchester United 3-1 up.

Smalling wraps up the three points for the Red Devils, converting an excellent free kick by Young into a bullet header by Joe Hart.

Aguero pulled back a consolation goal for Manchester City, catching the United defense asleep to fire his 19th goal of the year. The goal was also Aguero’s 100th for Manchester United in 159 appearances.

Robin van Persie has been ruled out of the clash between Manchester United and Manchester City at Old Trafford on Sunday afternoon. The 169th meeting between the two teams might not have title implications, but the two teams are separated by just one point in the table.

Despite their close proximity in the standings at the moment, the two teams are headed in opposite directions. Manchester United has won five straight games, including crucial games against Tottenham and Liverpool. Manchester City has lost three of its last five matches to lose touch with league-leaders Chelsea. 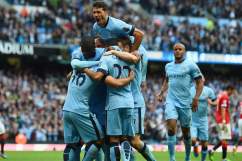