At long last, sports fan around the globe will get what they have been awaiting for years when Floyd Mayweather Jr. and Manny Pacquiao face off on Saturday at the MGM Grand, Las Vegas, Nevada on HBO and Showtime pay-per-view at 9PM ET/ 6PM PT.

Mayweather and Pacquiao, who have dominated the boxing landscape for almost a decade, have been ducking and avoiding each other since 2009, leaving fans to wonder who is truly today’s greatest. We’ll finally have our answer on Saturday when Mayweather puts his WBC and WBA welterweight belts, and his undefeated record, on the line against the mighty Pacquiao’s WBO World welterweight belt.

“Since the fight was announced, the response from the public has been unbelievable, and it’s even more clear that this is the fight the fans want to see,” said Mayweather. “I’m grateful that Manny Pacquiao and I were able to make it happen. This will be the biggest event in the history of boxing.”

Floyd Mayweather Jr. (47-0, 26 KOs) is one of the most well known, and wealthiest, athletes in the world today. With speed, power, and unmatched ring intelligence Mayweather has amassed 11 world championships across five weight divisions and has dispatched 20 world champions including icons Oscar De La Hoya, Shane Mosley, and Juan Manuel Márquez.

Mayweather, widely considered to be the No. 1 pound-for-pound boxer in the world, was last in action beating Marcos Maidana in consecutive fights. Going into the Maidana bouts, Pretty Boy had handily outpointed Canelo Alvarez in September 2013 and Robert Guerrero in May of that year.

One of the most exciting and successful fighters in the game today, Manny Pacquiao (57-5-2, 38 KOs) is the only boxer to win eight world titles in as many different weight divisions. Pacquiao’s past battles include win over Hall of Famers Oscar De La Hoya, Marco Antonio Barrera, Erik Morales, and Juan Manuel Márquez.

Pacquiao comes into the May 2 ubermatch having outpointed Chris Algieri in November 2014 in Macao, China. Prior to the Algieri encounter, Pacquiao had avenged his previous loss to Timothy Bradley after having dispatched Brandon Rios in November 2014.

“Manny Pacquiao and Floyd Mayweather have been the two most prominent fighters in the sport of boxing for the past decade, and fight fans around the world have been clamoring for them to face each other,” said Ken Hershman, President HBO Sports. “And now, on May 2, in what everyone believes will be the biggest boxing event of all-time, fight fans have been granted their wish.”

So, with less than a week before Floyd Mayweather Jr. and Manny Pacquiao’s showdown in the desert, we turn to the experts for their thoughts for the “Fight of the Century.” Heavy polled six boxing writers and insiders to get their predictions:

I learned a long time ago to never go against your first instinct when making a pick in this game. Pre-fight hype I’ve found over the years, often is designed to make you change your mind. Alas, many pre-fight factors can have a bearing on a fight but for me, styles and mind sets win prize fights. I can’t see how Mayweather’s boxing IQ or defensive counter punching shell can be beaten over 12 rounds by the aggressive, come forward, typhoon of Pacquiao. Floyd Mayweather to go 48-0 for me, but he might have to survive some of the scariest moments of his career. Mayweather by decision

It’s close, but Pacquiao has the right combination of skills – fast feet, fast hands, great conditioning when motivated, good angles, upper body movement, sharp and varied combinations – to outwork Floyd. Historically busy fighters or fast fighters have made the fights too close for comfort for Mayweather. Pacquiao does both and he also exploits his opportunities with blistering combinations. Mayweather is great for many reasons, but his low output is a blessing and a curse. He can’t run all night, and clinching southpaws that don’t fight inside is a tough thing to do. Pacquiao by decision

I don’t know how to feel about this one. On one hand, no way am I spending $100 for the PPV. A few years ago, yeah, for sure. Now, I can’t help but feel a bit frustration. Conversely, these guys are two of the best. Mayweather is untouchable, almost. Manny is one of the all time greats, but a bit passed his prime. It’s much more than a novelty fight, but it’s darn close. Prediction, Mayweather by unanimous decision with just a tinge of controversy. Mayweather by decision

First off, I want to say that I think, now in hindsight, that the fight IS happening at the right time. Both fighters will maximize their financial situation and at the same time, give the boxing fans what they have wanted for so long. With that said, I would love to dream that the fight will be a non-stop-action-affair and as a result, end with a stoppage, which would live up to the enormous hype its receiving, but in my opinion, I believe that the fight will prove to be anti-climatic. Despite his size advantage, I think Floyd Mayweather will dance around the ring and try to land a solid shot here or there. Floyd may even take some chances trying to slip in a power shot or two inside, but in the end, Manny Pacquiao, who I think will be, for the most part, chasing Floyd around the ring, WILL land enough significant punches to steal rounds. Manny’s speed, constant movement, and his punch output coming from CRAZY angles, all as a southpaw, will give Floyd trouble, despite all of Floyd’s own talent. Manny Pacquiao by a close decision to get the victory, which sets up Pacquiao-Mayweather II in September. Pacquiao by decision 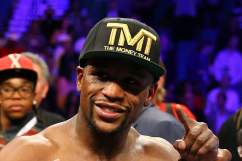 Mayweather is unparalleled in the adjustment category, especially if his opponent seizes some early momentum while he is growing comfortable in the ring. Pacquiao will expend more energy than Mayweather in those early rounds when he tries to establish momentum and control. Money will take advantage of any potential fatigue with his unstoppable jabs and timely counters late in the fight when Pac-Man fails to initially put him away. That will ultimately be enough to ensure that the number zero remains in the loss column for Mayweather. Mayweather by decision 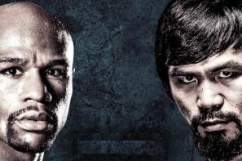 Floyd Mayweather Jr vs. Manny Pacquiao: Who Will Win? Vote!

To me, this fight is about two things: legacy and respect. Both men desperately need the “W” here to cement their place in all-time P4P rankings. Floyd is the favorite, rightfully so, and therefore, one could argue has more to lose come fight night. On the respect side, if Manny can’t hurt Floyd early and make him respect his power and pressure game, it could be a long night for the Filipino. On the other hand, if Manny can dictate the pace from the outset and sneak through Floyd’s tricky guard, he could force the American into a low output dance routine. Very tough fight to call. I look for Manny to start strong and keep Floyd backing up long enough to steal a few early rounds and take a close split decision followed by controversy and immediate rematch (cash grab). Pacquiao by decision

Rounding out our predictions:

From ‘Prediction: Mayweather beats Pacquiao by lopsided decision‘: Mayweather’s greatest attribute is timing; Pacquiao’s biggest weakness is being timed. His footwork is fast and sharp but limited to an in/out rhythm. This will be the key factor on May 2nd. Mayweather will time and pot-shot Pacquiao all night. We will see Mayweather’s jab more than ever before. This fight is going to be one of those where you feel short changed because it is so one sided. Mayweather by decision

From ‘Floyd Mayweather vs Manny Pacquiao Fight Predictions: 5 Ways Pacquiao Can Beat Mayweather‘: As the No.1 ranked Welterweight fighter in the world today, Mayweather is 47-0 in his professional career, and he has yet to even be knocked down the canvas. He’ll have to make some adjustments, as do all fighters for every match, but he shouldn’t change his style given the fact that he is facing Pacquiao. Mayweather should control the fight and make Pacquiao fight his type of battle. The Mayweather camp will most likely try to draw this fight out and get the victory by decision. Mayweather by decision

As for me? I see an intriguing matchup of speed, power, and talent. My heart says Pacquiao, but my mind knows better. I predict Mayweather figuring El Pacman’s rhythm and game plan by the fifth or sixth round and, from that point on, Pretty Boy dominates the speedy Filipino with his reach, timing, and superior conditioning in a tactical, chessmatch-like bout. Mayweather by decision

Check out how the celebs are picking the superfight here: