On a fluky play that will be talked about in Boston for years to come, Boston University goalie Matt O’Connor allowed a goal from center ice in the 3rd period, which broke a 3-3 tie and helped the Providence Friars win the 2015 National Championship Game.

That's a new one RT @TheCauldron GIF: BU's Matt O'Connor loses puck out his glove, it dribbles in the net http://t.co/ltnAm0nw2M

O’Connor badly judged the trajectory of the puck, and because of poor positioning, the puck, which was underneath him, ended up trickling in after he moved back. Providence’s 4th goal came just over two minutes later.

Providence was the last team to make the 2015 NCAA Division I Men’s Hockey Tournament. The game also took place in the TD Garden in Boston, which was essentially a home game for the Terriers, although Friars fans traveled well for the game. When combining those two factors, this Providence win ranks highly among the greatest upsets in the history of NCAA men’s hockey. 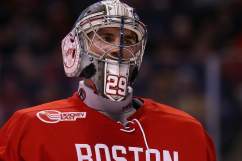