Wayne Rooney scores a rip-snorter against Aston Villa to put Manchester United 2-0 up. Rooney pulled Angel di Maria’s cross out of the air with his left before smashing the ball home with his right.

Manchester United won the game 3-1, moving eight points clear of Liverpool in 5th place and moving, temporarily at least, up to 3rd in the table. 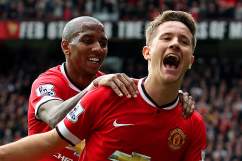