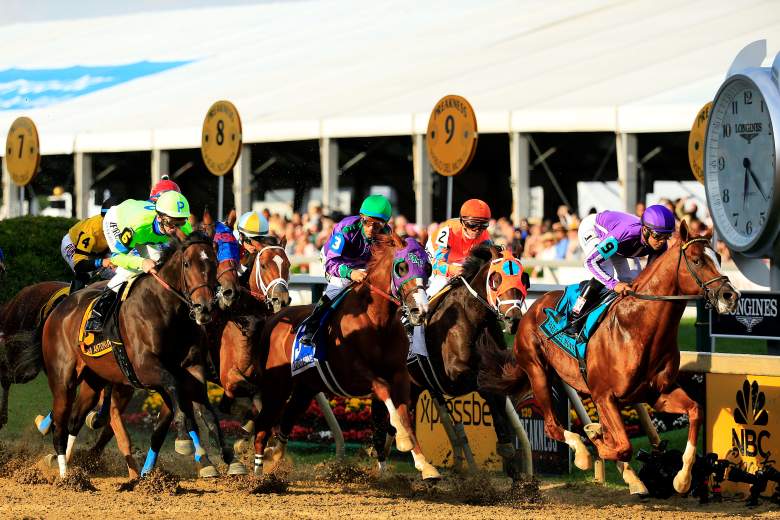 BALTIMORE, MD – MAY 17: California Chrome #3, ridden by Victor Espinoza, races with the field during the 139th running of the Preakness Stakes at Pimlico Race Course on May 17, 2014 in Baltimore, Maryland. (Photo by Patrick Smith/Getty Images)

If the 2015 Kentucky Derby was a Heavyweight Championship fight that went 12 rounds, then the Preakness is the much-hyped rematch that instead of waiting several months to see, comes just two weeks after the big fight.

Up to 14 horses will try to capture the second jewel in horse racings Triple Crown. The 2015 Preakness field is slowly shaping up with still two spots to fill, and like the Kentucky Derby, it is loaded.

Just how loaded? Factor in this: American Pharoah — trained by Bob Baffert and ridden by three-time Kentucky Derby winning jockey Victor Espinoza — won the Kentucky Derby. The horses that finished 2nd-10th in the 2015 Kentucky Derby are ALL running in the Preakness — that includes: Firing Line (2nd), Dortmund (3rd), Danzig Moon (5th), Materiality (6th) and Carpe Diem (10th). What makes this field even more special is that these six horses were six of the top choices in the Derby… despite Danzig Moon going off at 21/1.

Bodhittsavas name was added to the Preakness hat on Sunday, bringing the total to 12. One of the race’s interesting additions is Divining Rod who won the 2015 Lexington Stakes, but did not have enough points to qualify for the 2015 Kentucky Derby.

Like the Derby, the 2015 Preakness Contenders have been 2015’s usual suspects so far: Dortmund, Firing Line, Carpe Diem and the favorite American Pharoah.

Horse to Watch: Competitive Edge — his last race was the Tamarac Stakes, which he won. In fact, he’s won all four of his career starts. A hairline fracture in his hind leg took him out of the running for the Kentucky Derby, but he has since shown no signs of the injury slowing him down. Competitve Edge won the Grade 3 Pat Day Mile Stakes on Kentucky Derby day.

Horse to Disappoint: Grand Bili — not that the horse has any expectations with just two career starts, but both of his two starts have been at seven furlongs and he is CLEARLY outclassed and the longest shot to win the race, and it’s not even close.

The Dark Horse: Materiality — Materiality’s speed figures were excellent entering the 2015 Kentucky Derby, but it was another speedster, Firing Line, that ended up being the pace-setter in the Derby. Materiality has the benefit of having the least amount of career stats of the six main contenders, which may come into play here because Javier Castellano may have enough horse to set a scorching early pace in Pimlico.

Early Pick to Win: Assuming American Pharoah is as good as advertised — and he is — the shortened distance should make it easier for Espinoza to make his move to the lead earlier and for American Pharoah to hold off any closers late. The Preakness is historically not a closer’s race.

Read More
Breaking News, Horse Racing, Preakness, Preakness 2015
American Pharoah won the 2015 Kentucky Derby and is a lock to go off as the heavy favorite in the Preakness. Find out the other Preakness contenders here.