Amir Khan smashes Devon Alexander in the fifth round of their welterweight bout at the MGM Grand Garden Arena on December 13, 2014. (Getty)

[Click here for round-by-round updates, results, and highlights of the Khan-Algieri fight.]

It’s hand speed versus foot speed when Amir Khan faces off against Chris Algieri on Friday at Barclays Center in Brooklyn, New York.

The event will be televised live by Premier Boxing Champions on Spike TV at 9 pm ET/6 pm PT. 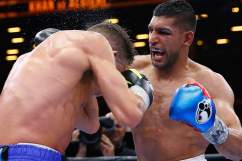 Chris Algieri has a go at Manny Pacquiao during the WBO world welterweight title at The Venetian on November 23, 2014 in Macau, Macau. (Getty)

Amir Khan enters the fight as a strong favorite in Las Vegas and on online sportsbooks (see odds below). But “King Khan” will be battling it out on Algieri’s home turf, and last time the Long Islander fought at the Barclays Center, he pulled off one of the biggest upsets of the year. Could Friday’s matchup be a repeat triumph for Algieri?

“It could be dangerous for me coming into this fight if I’m not on my A-game,” Khan said. “I have to be one step ahead and make sure I don’t make any mistakes. Chris Algieri is a guy that if you make a mistake, he’s going to make you pay for it.”

Olympic silver medalist Amir Khan (30-3, 19 KOs) has always been an exciting, flashy boxer with dazzling hand speed and a come-forward, offensive style. But since teaming up with American trainer Virgil Hunter in 2012 and moving up to the 147-pound welterweight division in ‘13, the former super lightweight world champion has added a new dimension to his game, with an improved defense and more pop to his punch.

“You can still be exciting, you can still be come forward, you can still throw a lot of punches, but being careful at the same time,” Khan has said. “That’s what Virgil’s brought to the table; making me a better fighter.  He’s making me a fighter that understands everything of what I have to do in the ring and stick to that game plan.”

Khan, 28-year-old, was last in the ring outpointing Devon Alexander in December of 2014. Going into the Alexander bout, the Bolton man had beaten battle-tested warriors Luis Collazo, Julio Diaz, and Carlos Molina. Amir’s most recent defeat came to Danny Garcia in 2012.

New Yorker Chris Algieri (20-1, 8 KOs) was an unknown club fighter with good legs before he entered the ring as a heavy underdog in June 2014 to face mauler Ruslan Provodnikov. With a hometown crowd behind him, the former kickboxer champ withstood two first-round knockdowns and put together a boxing masterclass that left the brawling Russian swinging at air.

That effort was enough to secure himself a controversial split decision, Provodnikov’s WBO light welterweight title, and a pay-per-view showdown with the mighty Manny Pacquiao. Algieri, 31 years old, went on to suffer his first professional defeat at the hands of Pacman, but he walked away from the bout with his pride and a lifetime’s worth of experience.

Now he’s back with a new trainer, John David Jackson, and ready to prove that he’s more than just a flash in the pan.

“I’m just a very hungry fighter at this point,” Algieri said during a recent media event. “I’m coming off my first loss as a professional, and watching Pacquiao and Mayweather fight this weekend has spurred me on even that much more, made me that much more of a hungry fighter.“

Let’s take a look at the betting odds:

Amir Khan connects with a right at Luis Collazo during their welterweight bout at the MGM Grand Garden Arena on May 3, 2014. (Getty)

It will be interesting to see how Algieri comes back after his Pacquiao loss and with an upgraded corner– bringing in trainer John David Jackson to replace the much-criticized Tim Lane.

But Khan has been looking better and better with every recent fight and, despite the Long Islander’s impressive performance against Provodnikov and the experience gained from fighting Manny, I still consider Algieri a high-level regional fighter who will be outclassed by a seasoned fighter, like Khan, who brings such a complete package to the table.

While I don’t see Amir stopping Algieri (the guy was able to take a beating from Provo and kept coming back for more), I do predict a one-sided decision win for King Khan. 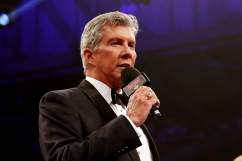