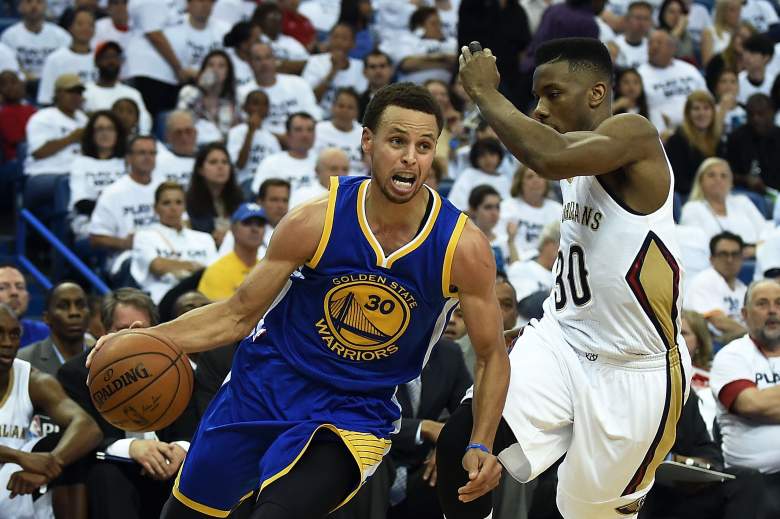 Stephen Curry of the Golden State Warriors has been fantasy gold. (Getty)

The NBA Playoffs are heating up and Heavy’s partner DraftKings is making the postseason more exciting as they are offering free fantasy basketball contests for new users.

Sign up for the free NBA $100KSharpshooter contest here.

The rules are simple: When you sign in for the contest, you will be given a fixed salary cap of $50,000 to draft your 8 player roster. The Player Pool will consist of all NBA players expected to be playing on a given game day.

There are 2 games Tuesday night – Washington at Atlanta and Memphis at Golden State.

All DraftKings games are salary cap-based, so you need to find a healthy balance of higher-priced stars and lower-priced bargains. You won’t be able to field a team of superstars because you just can’t fit the salaries of the 8 best players under a $50,000 cap.

For Thursday’s contests, Golden State point guard and league MVP Stephen Curry has the biggest cap number at $10,700. He’s also scoring the most fantasy points per game at 46.2. Wizards point guard John Wall costs $9,400 and gets 42.5 FPP. Fitting them both in your lineup is possible, you’d just need to really skimp on other positions. Is it worth it? I don’t think so.

Wall has been battling a wrist problem, but he has been lights out, scoring 50+ fantasy points in 3 of the past 4 games. Curry is the MVP and seemingly does nothing wrong. He’s scored 60+ in 2 of the past 3. I’d lean Curry.

Wizards shooting guard Bradley Beal ($7,300) has scored over 40 fantasy points in each of the past 2 games, but sprained an ankle Sunday. He’ll play Tuesday, but you might be better served using Hawks SG Kyle Korver, who comes in at $900 less and has been nearly just as productive fantasy-wise.

A nice bargain for Tuesday night for the UTIL or other Guard position is Atlanta’s Dennis Schroeder. At $3,600, he has 2 consecutive 18-point fantasy games and seems to have the confidence of Hawks coach Mike Budenholzer.

The $100K Sharpshooter is just one of many NBA playoff contests offered by DraftKings. There are other featured contests with higher buy-ins, such as the NBA $80K Crossover, which you can enter for $27 and many more.

Check out the game lobby for all of the live NBA contests offered by DraftKings.

DraftKings also offers one-day fantasy games for a variety of other sports like baseball, golf, NHL, MMA and soccer.