Keep calm and Stepan — thanks to Derek Stepan, the Rangers moved on to their 2nd straight Eastern Conference Final with another OT game-winning goal at Madison Square Garden.

The New York Rangers also improved their record in Game 7s to 9-5 overall with a 2-1 OT victory that eliminated the Washington Capitals. The Rangers are 7-0 in their last seven Game 7s at home dating back to 1994 — the last time the team won the Stanley Cup. The Rangers also became the first team in NHL history to come back from 3-1 series deficits in consecutive postseasons.

The Washington Capitals have now blown 18% of the series in NHL history where a team was up 3-1 and lost.

Alex Ovechkin lit up the scoreboard first after the 8:00 mark in the first period to give the Capitals a 1-0 lead. the Rangers answered with a Kevin Hayes power play goal in the 2nd. Ovechkin guaranteed that the Caps would win Game 7, and ended up being the only player to show up on the score sheet.

The Rangers struggling power play showed glimpses and cashed in on their 4th opportunity in the 2nd period where J.T. Miller connected on a backdoor pass to Kevin Hayes to nod the game at 1-1.

After a tightly played 3rd period, the Caps and Rangers moved into OT. off of a Derek Stepan faceoff win, the puck moved to Dan Girardi who shot it from the point. Braden Holtby couldn’t handle the rebound, which landed on Stepan’s stick in front of the net and the rest is history.

Henrik Lundqvist also improve his overall Game 7 record to 6-1 and is 6-0 in his last six Game 7s. His only loss came in 2009 to the Capitals — after the Rangers had blown a 3-1 series lead in the opening round.

Here is how Game 7 went down:

Ovechkin who guaranteed that the Caps would win Game 7 in MSG gave the Caps some first period momentum with a goal on a play immediately after a faceoff in the Rangers zone.

After 3 Power Plays, the Rangers Finally Cash In

VINE- Rangers' Kevin Hayes ties it up in Game 7 https://t.co/APAqYuOUqi

The Rangers have used their speed to create a cycle down low. The Caps had taken four penalties up until this point in the game.
The Rangers cashed in on their 4th power play when J.T. Miller led a tic-tac-toe play to Kevin Hayes that tied the game at 1-1.

History Favors Henrik Lundqvist & Not the Capitals in Game 7s 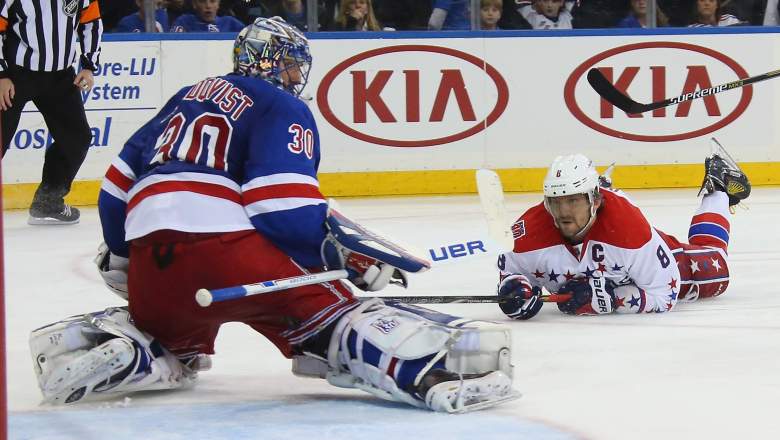 Thanks to a 3rd period Evgeni Kuvnetsov goal, the Capitals defeated the New York Islanders 2-1 in Game 7 of their first round series of the 2015 Stanley Cup Playoffs — this win brought the Caps to 3-9 in their 12 all-time Game 7 appearances.

The Caps were well on their way to disposing the other New York represented team a little bit easier, and bucking what seems to be a historical trend of the team losing other playoff series after being up 3-1.

Then with 1:41 left in the 3rd period of Game, Rangers’ forward Chris Kreider scored to tie the game at 1-1. In OT, captain Ryan McDonagh beat Braden Holtby to win the game 2-1 for the Rangers cutting the lead to 3-2. The Rangers came back with a 4-3 win in Game 6 in Washington that wasn’t easy after the Rangers gave up the game’s final 32 shots…

Game 7 at Madison Square Garden will be a test for the Capitals organization. The team has not gotten past the second round since 1998 — a year they went to their only Stanley Cup — head coach Barry Trotz has never been out of the second round, and neither has their star player and captain Alex Ovechkin. For the Rangers, they’ve been tested before as they look to make their third Eastern conference Final appearance in the last four seasons.

This series has been the closest out of all of the four second round series that took place. While the Blackhawks advanced in a 4-0 sweep of Minnesota, Anaheim defeated Calgary 4-1 and Tampa Bay bested Montreal 4-2 after winning the first three and dropping the next two, the Rangers and Caps have played six tight one-goal games, all thanks to Braden Holtby who has undoubtedly been the best overall player in the entire series despite giving up four goals in Game 6.

Ovechkin and company have a chance to create some new history with a win. With a loss, they’ll simply add to what is already written, furthering the history of Henrik Lundqvist’s in Game 7s. Lundqvist has won five Game 7s in a row, which is an NHL record:

Either way, history will be made tonight sat MSG. 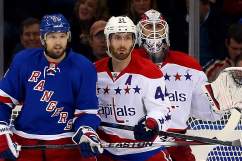 How to Watch Capitals vs. Rangers, Round 2 Live Stream Online