Gennady Golovkin knocks out Willie Monroe of the US in the sixth round during their Middleweight World Championship bout at the Forum Arena in Los Angeles, California on May 16, (Getty)

The end came at 45 seconds of round six, after Monroe told referee Jack Reese he could not continue the contest. GGG had put Monroe down three times before the fight was waved off– twice in the second round, and once right before the end.

The hunt started immediately for Gennady, closing the distance; pressuring the fleet-footed Monroe into the corners and ropes; and unloading with straight rights and hooks. Monroe began the fight using his movement and his jab to keep GGG at bay, but found better results in the fourth and fifth rounds by standing his ground and trading shots with the hard-hitting Kazakh.

Despite the ultimate loss, Monroe made a good account of himself– coming back from a near-disastrous, two-knockdown second round, and during the close-quarter warfare of the fourth and fifth rounds. But Golovkin’s constant pressure, power, and resilience won out over the game southpaw, and GGG walked away with his 20th consecutive stoppage.

“I showed [Monroe] who is number one, who is the real champ,” Golovkin said to HBO’s Max Kellerman after the fight. “I gave him a chance and I say ‘Here, just come on. Bring Big Drama Show! Come on, let’s do it!’ ”

New Yorker Willie Monroe Jr. (19-2, 6 KOs) came into the fight off the heels of a unanimous decision win over shopworn veteran Bryan Vera on January 16. Prior to that fight, the 28-year-old Boxcino 2014 Middleweight champion had outpointed Brandon Adams and Vitaliy Kopylenko of Ukraine. Before Saturday, Monroe’s only professional loss came to Darnell Boone in 2011. 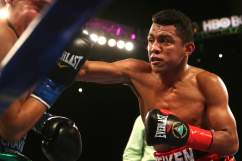 With the win Gennady Golovkin, one of today’s most exciting and avoided boxers, holds on to his unblemished record and improves it to 33-0, 30 KOs.

Previous to Saturday, Golovkin had last been in the ring stopping Brit Martin Murray with an 11th-round TKO back in February of this year. Going into the Murray fight, Golovkin had plowed over Marco Antonio Rubio and demolished Australian Daniel Geale.

Fans of GGG have been clamoring for a real challenge for their man. Canelo Alvarez, coming off of his impressive knockout win over James Kirkland, could be in the crosshairs. Assuming Miguel Cotto gets passed Daniel Geale on June 6th, the world middleweight champ could also be a possible opponent.

Refresh this page throughout the fight for streaming updates.

Round 1: Willie Monroe Jr. in black, GGG in white trunks and purple gloves. Monroe fights out of a southpaw stance. They meet in the center of the ring, jabbing and measuring. Monroe takes to the perimeter, throwing left right hooks. GGG stalking. GGG tests right hand over jab. GGG lands a heavy right. GGG on the stalk. Half-way through the round. Stiff jab from Golovkin, and then a right. Left from Monroe lands. Golovkin working the ring well. Monroe to the body. Monroe trapped in the corner. Gets out. Golovkin lands big right, Monroe returns with combo. GGG in control 10-9 Golovkin.

Round 2: Back at it. GGG stalking, Monroe using his jab and movement to maintain distance. Left to the body from GGG. Monroe with right hook. Minute in, Monroe in the corner. Left hook- Monroe KNOCKED DOWN! He’s up but hurt. GGG goes after him, has him in the corner, lands left hook. Another KNOCK DOWN! He wants more. Monroe lands an uppercut. Again! But GGG walks through them. Gennady taking his time. Right hook Monroe lands. 20-16

Round 3: GGG comes out stalking. Monroe moving, keeping away. Smart! GGG lands to the body, then goes upstairs with right. Right and left from Golovkin. They trade in the center of the ring, Monroe looking alive, lands a hook to the body. Big left from GGG lands. Still squaring off in the center of the ring. Big left from Monroe lands, but GGG smirks. But Monroe keeps punching. Left from Golovkin to the body, then head. Right hand from GGG. Monroe moving, GGG following. Good round for Monroe. But still for GGG.  30-25

Round 5: Meet in the center, and Golovkin pushes to the ropes. Big hook from GGG, Monroe looks wobbly.  Now Monroe comes back with left. Hook from GGG. Trading shots in the center of the ring. Close quarters. Left-right from Monroe. Monroe countering well. Two rights to the body from GGG. Monroe trapped in the corner. Right hook from Monroe off the ropes. GGG keeps the pressure. Good left from Golovkin. Right hand from GGG. Left from Monroe gets through guard. 49-43 Golovkin

Round 6: Golovkin moves forward behind a tight guard. A big right hurts Monroe. GGG unloads against the ropes. KNOCKED DOWN! Monroe can’t go on. Jack Reese waves off the fight! GGG #20!