Andre Iguodala goes up against LeBron James in the third quarter during Game Four of the 2015 NBA Finals. (Photo by Jason Miller/Getty Images)

The Golden State Warriors evened out the series 2-2 much to the disappointment of the Cleveland fans. Cleveland fell to the Warriors in Game 4 by a 21 point deficit, by far the largest difference in score so far in this year’s NBA Finals.

LeBron James and MVP Steph Curry laid low and let their teammates do a lot of the work. Unfortunately for Cleveland, the Warriors can get away with it while the Cavaliers need the King to lead them on the court.

Andre Iguodala gets down the floor and crushes the #DunkoftheNight presented by @SamsungMobileUS http://t.co/QogGDtJaP9

The Cavaliers paid the price for leaving Iguodala open. He took his starting position seriously with 22 points and 8 rebounds, his high for the season. He was 8-15 with FG, 4-9 from behind the three-point line and made both of his free throws. He also seemed to be mocking the Cavs while he dominated the number one player in the world.

Lebron Was Being Doubled and Shut Down

Jeff Van Gundy: "It's not often that LeBron James get outplayed, but Andre Iguodala has won that matchup tonight" http://t.co/iWyvA75dd2

The Warriors finally decided to double Lebron and he stayed quiet from there on out, scoring just 20 points. That is half of his average for Games 1-3.

Draymond Green Had a Standout Game

Green had 17 points, 7 rebounds and 6 assists to help the Warriors tie the series. Game 4 was by far Green’s best game of the series.

LeBron Was 5-10 on Free Throws

LeBron James reacts in the second quarter against the Golden State Warriors during Game Four of the 2015 NBA Finals. (Photo by Ronald Martinez/Getty Images)

LeBron’s usual accuracy from behind the free throw line was lacking tonight, along with the rest of his game although the Warriors didm;t give him much room to do anything.

Delly threw it above the rim while James did the rest to cut the 12 point lead at the half to 3, but the Cavs couldn’t keep up as the Warriors ran away with the win. Dellavedova didn’t play anywhere near as well as he did in Games 2-3, but like all the other games he gave it his all.

Mozgov is playing his heart out, but the 7’1 Cav kept getting called on close fouls. He finished up the game with 28 points, 10 rebounds and an assist. He was the best player on the court on the Cavs’ side.

Dellavedova Made Back-to-Back Threes, But Cramped Up

Dellavedova was feeling himself after hitting two three-pointers. Aside from that, he was looking pretty tired in Game 4. He took a breather because his legs were cramped from the knee up. Dellavedova has been averaging 40 minutes per game, time he is not used to playing. He finished with 10 points, 1 rebound and 4 assists.

LeBron hit his head on a camera after a foul by Bogut caused him to lose his balance. He is back in the game. WATCH: http://t.co/da6EyvzeUn

Bogut logged his third foul in two minutes. One of the fouls was on LeBron James who lost his balance and fell out of bounds head first into a camera. LeBron was hurting and bleeding, but stayed in for the remainder of the game. The cuts on his head definitely had an impact on his play.

Lebron Had an Insane Assist to Mozgov

The Cavaliers were at one point leading 7-0 with 9 minutes to go in the first quarter. All 5 starters for Cleveland scored in the first half of the quarter, but things went downhill fast thereafter.

Draymond Green Had an And One Against Mozgov

Green went up for a shot and made it after Mozgov got a questionable foul call. The Golden State Warriors took the lead in the beginning for once after Klay Thompson sunk another shot.

Warriors with back to back 30+ point qtrs, after having zero thru first 11 qtrs.

J.R. Smith Played Badly and Kept Getting Called on Fouls He Didn’t Commit

David Lee drew a foul on J.R. Smith even though Smith didn’t touch him. The Warriors got two points out of it and Lebron wasn’t getting any calls either. J.R. finished with a pretty bad game, scoring just 4 points with 2 rebounds and assists each.

James Jones was playing hard defense against the Warriors, but couldn’t get the job done. 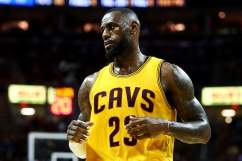 LeBron James controls the ball against the Golden State Warriors during Game Three of the 2015 NBA Finals. (Photo by Jason Miller/Getty Images)

This NBA series has featured some of the most exciting games that have ever been played in an NBA Finals, two of which went into overtime. With the series tied at 2-1, Game 3 proved that no matter what the score is by the fourth quarter, it is anyone’s game based on the Golden State Warriors’ ability to close a 20 point gap in the fourth quarter.

With Kyrie Irving and Kevin Love both sidelined, LeBron James was going to have to carry Cleveland on his back in order to clinch a victory for the ages and end the 145 season championship drought for Cleveland sports for ‘Believeland.’

Based on the first three games, James might just be able to pull it off.

Playing in his first home NBA Finals game in Cleveland since 2007, James finished 14-for-34 from the field, 2-for-6 from 3, and 10-for-12 from the line. He played all but two minutes, joining teammate Tristan Thompson (44 minutes) and the Warriors’ Steph Curry (also 44) as the only players on either team to play more than 40 minutes.

James has averaged 46 minutes and scored at least 39 points in all three NBA Finals games for a record-breaking 123 points, the most ever scored in the first three games of the NBA Finals. 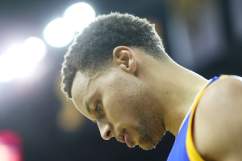 MVP Steph Curry isn’t performing to the best of his ability so far, whether it be Dellavedova’s stubborn defense or the pressure weighing down on him.

In Game 3, Curry started out at almost a dead stop in the first half with just 3 points in the first quarter and 7 in the second, but came storming back with 17 points in the fourth quarter alone to total 27 points for the game in his 44 minutes. Unfortunately for the Warriors, it was too little to late and they went down 1-2 in the series.

Luckily, Curry turned it around in the fourth quarter- it took him long enough.

Curry was relentless as he buried shot after shot in the fourth while the Cavs were unable to keep the ball out of his hands. Curry’s 17 points in the fourth quarter alone and it’s safe to say it wasn’t a coincidence that Golden State closed the gap so quickly at the end. He finished at 10-20 and 7-13 from the 3-point line.

If Curry keeps up his momentum from that fourth quarter, the Warriors might have a chance to tie up the series.