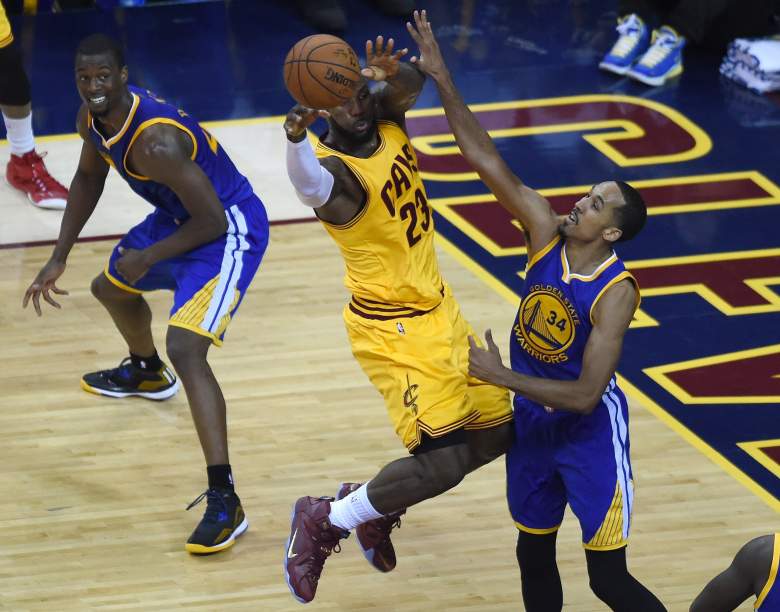 LeBron James (L) had a monster Game 5, but it wasn’t enough as Golden State took a 3-2 series lead. (Getty)

The Golden State Warriors pulled away for a 104-91 win over the Cleveland Cavaliers on Sunday night in Game 5 of the NBA Finals to take a 3-2 series lead back to Cleveland. The teams traded punches for most of the game before the Warriors used a spurt in the middle stretches of the fourth to win the game.

MVP Stephen Curry played his finest game yet, pouring in 37 points while shooting 7-of-13 from downtown. Curry scored 17 points in the fourth quarter. LeBron James posted another triple double for Cleveland, going 40-14-11 in the loss.

Both teams went small for virtually the entire game. LeBron event spent time at center, but was usually the power forward in a Dellavedora-Shumpert-Smith-James-Thompson lineup.

The Warriors started out on an 8-2 run and looked to be heading towards blowing the Cavs out of the building. However LeBron James found his scoring touch early and often, firing 10 in the first quarter to make the score 22-22 after one.

The Cavs began the second quarter on a 17-8 run to take a nine-point lead, but Steph Curry hit back-to-back three quarters to draw close, and the Warriors closed the quarter strong and took a one point lead into the halftime locker room behind a 3-point play from Harrison Barnes.

The Warriors turned up the heat on defense in the third quarter and held the Cavs to just two points in the final 3-plus minutes to take a 73-67 lead into the fourth quarter.

Three-pointers by James and Iman Shumpert tied the game at 75-75 with nine minutes left before the Warriors’ offense exploded down the stretch, led by Curry’s 3-point brigade.

Here are some of the highlights of Golden State’s win.

The Warriors came out on fire, hitting most of their shots in pulling out to an 8-2 lead. Here is a slam in transition by Green.

With the Cavs pushing to get closer, Smith runs into Green and is called for the flagrant foul.

After LeBron James got hot to give the Cavs a lead, Curry hit this shot.

The Warriors closed the first half on a 20-11 run, highlighted by this three-point play from Harrison Barnes. The Warriors took a 51-50 lead into the halftime locker room.

The Warriors turned up their defense and closed the third on a 10-2 run.

In a back-and-forth start to the fourth quarter, LeBron quiets the crowd with an insane shot.

The NBA’s MVP delivered an immmediate response, nailing a 3-pointer to put Golden State Up 82-80. Klay Thompson would hit another 3 to make it 85-80 with six minutes left.

It’s been a series of adjustments between the Warriors and Cavs so far in the NBA Finals. The biggest change came in Game 4, when Warriors head coach Steve Kerr inserted Andre Iguodala into the starting lineup and moved Draymond Green to center. The Warriors hit enough 3s and Iguodala played impeccable defense on LeBron James to make the decision look like a genius one.

Now the Cavs must regroup and make adjustments of their own, but at the top of that would simply be hitting open shots. The Warriors made James’ teammates beat them, and the Cavs couldn’t capitalize, going 4-for-27 from downtown in Game 4. The absence of Kevin Love and Kyrie Irving is looming large as they would both provide an offensive punch that is sorely lacking.

Cleveland will continue to have the advanage inside with Timofey Mozgov and Tristian Thompson crashing the glass. Mosgov exploded for 28 points in Game 4 to lead all scorers, but it wasn’t nearly enough. The small-ball style of Golden State won out easily, but will it continue? 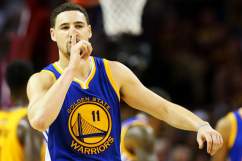