LeBron James celebrates in the fourth quarter against the Golden State Warriors during Game Two of the 2015 NBA Finals at ORACLE Arena. (Photo by Ezra Shaw/Getty Images)

The Cleveland Cavaliers clinched the second game of the series 95-93 in overtime against the Golden State Warriors to tie the series, 1-1. Klay Thompson and Lebron both dominated the court while Steph Curry and his three-point shots stayed quiet thanks to Matthew Dellavdova who started in place of Kyrie Irving.

This marks the first time the Cleveland Cavaliers have ever won an NBA Finals game. Click here for the box score.

"Our guys love the fact that we've been counted out." – LeBron James #LIVEonSC pic.twitter.com/WKdvd9AfqH

Dellavedova shut down the NBA’s MVP, allowing Curry to score just 19 points during the game, including overtime.

Irving remains back in a hospital in Cleveland with a broken knee. He is in the hospital as a precautionary and starts recovery next week. Dellavedova said he’s comfortable filling in the position.

Lebron Scored 39 Points and Had a Triple Double

LeBron James with ice in his veins. http://t.co/3hoVvHVEqA

Lebron had 39 points, 16 rebounds and 11 assists. In the second quarter, he had 15 of the 25 Points for the Cavs at one point. Lebron now has 5 postseason triple doubles, second in history to Magic Johnson. 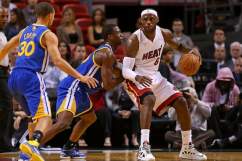 Stephen Curry celebrates in the first quarter against the Cleveland Cavaliers during Game Two of the 2015 NBA Finals at ORACLE Arena. (Photo by Ezra Shaw/Getty Images)

Curry was quiet during the game thanks to Dellavedova’s stellar defense, boldly filling the shoes of injured teammate Kyrie Irving. Curry was 0-5 before his 3-pointer with 3 minutes left in the first half. With six minutes left in the game, he was 1-11 from behind the 3-point line.

Klay Thompson Had an Impressive Alley-Oop to Igoudala

Klay Thompson had 20 points in the first half after a 3-pointer that might have been on the line. At first it was counted as a three, but it was changed to a 2 after review. Prior to his reversed 3-pointer, he teamed up with Igoudala for this alley-lop.

J.R. Smith sunk a three to give the Cavs a ten point lead and then Dellavedova hit another to go up by 11 after the Warriors shot a 2 to make it the largest lead of the game. Somehow, Cleveland still managed to let go of this lead.

Shumpert air balled after Curry scored 5 points and then proceeded to tie up the game to go into overtime for the second time in the series.

Lebron got rejected hard by Draymond Green, but Dellavedova got fouled and made both his shots to give the Cavs a lead by one and to win the game.

J.R. Smith Fouled Out and Curry Got the Lead For Golden State

Steph Curry was just 5-19 from the field prior to OT, but he was CLUTCH at the end of regulation. http://t.co/nWL0UzgGck

J.R. Smith fouled out in overtime and Curry sank two shots at the foul line to give Golden State the lead in overtime.

James Was Fouled By Iguodala and Green, But Golden State Got the Call

LeBron James drives against Andre Iguodala in the second quarter during Game Two of the 2015 NBA Finals at ORACLE Arena. (Photo by Ezra Shaw/Getty Images)

There was a jump ball and James was fouled by Green and catches the ball. He was called on a violation for catching his own jump ball and once again Golden State got possession of the ball on a poor call by the refs.

LeBron James drives against Stephen Curry during Game One of the 2015 NBA Finals at ORACLE Arena.(Photo by Ezra Shaw/Getty Images)

The Golden State Warriors were predicted to be here along with the Cleveland Cavaliers, but the ways in which each team reached this point could not have been foreseen. The Cavaliers are looking for their first NBA title in history and the Warriors are 1-0 in the series in their attempt to win their first NBA championship since 1975.

The Warriors have the highest number of regular season wins at 67-15 and went 12-3 over the first three rounds of the playoffs to get her. The Warriors also possess MVP Stephen Curry who has continued to get better as the season has progressed with a current average of 29.2 points per game in the playoffs. He also set a playoff record by burying 73 three-pointers, shattering Reggie Miller’s 58.

The Cavaliers’ injury situation has put them at a huge disadvantage with Kyrie Irving out with a fractured left knee for the remainder of the finals as the second leading scorer and the loss of Kevin Love with a severe shoulder injury. After Lebron’s 44 points in Game 1, it is clear he can’t do this by himself no matter how well he plays. 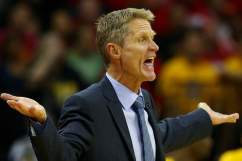