Erin served as Jimmy’s caddie at the Masters Par 3 Contest in April. Walker finished tied for 38th in golf’s first major of the season. (Instagram)

Jimmy Walker is establishing himself as one of the most consistent and best players on the PGA Tour.

But as his wife Erin told PGATour.com: “Jimmy might be the president but I’m the CEO.”

An accomplished equestrian rider, insightful blogger and savvy social media poster, Erin has a lot going for her.

Here’s what you need to know about Erin and Jimmy Walker:

Erin has written for a number of golf periodicals, including Golf Digest. She chronicles life on the road as a PGA family in a light, refreshing way. (Twitter)

In 2004, Jimmy was a 3rd-year pro playing on the Nationwide Tour (now Web.com). At one of the events he and a female volunteer hit if off. That volunteer was Erin Stiegemeier.

The couple began dating and were married in 2005.

2. She Is Accomplished Equestrian Show Jumper

Jimmy isn’t the only athlete in the Walker household. Erin is an accomplished equestrian show jumper.

Her love of horses is evident as her Twitter account is full of photos and posts about them.

Birthday excellence with my #CORequestrian family. We missed you @JimmyWalkerPGA who was working hard in Vegas. pic.twitter.com/tClmSukfC8

Erin’s athleticism must run in the family; her father Mark was was a World Champion freestyle skier in the 1970s.

3. Erin Has Written For a Golf Magazines

Jimmy and Erin met in 2004 at a Nationwide Tour event. Jimmy was playing and Erin was a volunteer at the tournament. (Twitter)

Erin has written for a number of golf periodicals, including Golf Digest and golf.com.

In 2013, she wrote an article for golf.com saying golfers earn every penny they make as opposed to golf writers, who make too much.

She also chronicled life on the road as a PGA Tour family for Golf Digest. She has a light, humorous approach. Click here to check out her archive on the site.

In 2014, Walker had a great run in the majors. He finished tied for 8th in the Masters, tied for 9th in the U.S. Open and tied for 7th in the PGA Championship. He was T26 in the British Open. Those finishes were all career bests in majors.

In 2015, he missed the cut in the PGA Championship, but had T38, T58 and T30 finishes at the Masters, U.S. Open and the British Open, respectively.

Walker hasn’t fared as well in 2016. He finished tied for 26th at the Masters, but missed the cut at the U.S. and Open Championship.

Erin and the children are often at the events, especially the big tournaments.

5. The Walkers Are Very Much Into Social Media

It is definitely a unique perspective and quite refreshing and entertaining. You can follow her @tourwifetravels.

Jimmy is also social media. Of course he tweets and posts photos about golf, but also let’s us in on one of his biggest hobbies — astronomy. 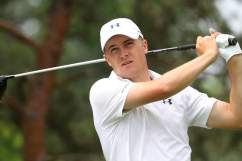