Say it with me: Kickers are people too. Although they are the result of a last round pick or the final sliver of your salary pie, a solid kicking game can be a huge fantasy boosts. In the first week of 2014, Matt Bryant hit three field goals, 2 from over 50 yards. He was one of the few Falcons to have a quality fantasy year, and should repeat in 2015.

The strategy with kickers can vary. Some say the best kickers come from the best offenses, where touchdowns are regular and opportunities are constant. This theory generates consistent results, but doesn’t always produce a large total of points for your kicker.

The best fantasy kicker is one that is regularly kicking from beyond 40 yards. With that in mind, I personally like to draft kickers from offenses that can stall periodically. Teams like the Ravens, Giants, Bengals and Falcons all move the ball well, then can have stagnant periods where they appear out of sync. Having a distance kicker to take advantage of these opportunities is how you end up with the highest scoring kicker of the week.

This is a safe ranking for 2015, using a mix of both schools of thought. On we go:

If you can get him in the last round, Adam Vinatieri can still kick it better than anyone. Last year at 42, Vinatieri had one of his best seasons yet, and eclipsed 50 extra points for only the third time in his career. With an offense that is guaranteed to move the ball, Vinatieri will definitely be staying busy in 2015.

One of the most accurate kickers in the league, Stevie G is probably the only Patriot besides Jimmy Garoppolo who will benefit from Tom Brady’s suspension. With an offense that will be less proficient, especially in the red zone, Gostkowski should improve on his league-best 13 attempts from 40-49 yards. 2014 was the most accurate season of his career for field goals, and he converted all 51 extra point attempts.

Atlanta had a disappointing season last year, and that resulted in some changes. What didn’t change is Matt Ryan, Julio Jones, and Matt Bryant. Ryan and Jones move the ball, and Bryant puts it through for three. Bryant made seven kicks from beyond 50 yards last season, more than any kicker in the NFL. In fantasy leagues where distance equals bonus points, Bryant is a top-tier kicker. Including their home stadium, Bryant and the Falcons will play 10 games in dome stadiums this season.

Carpenter’s second year in Buffalo was one of the best he’s ever had. DC3 set career bests in field goals from beyond 50 (6) as well as total made (34). Now a part of the Rex Ryan regime, Carpenter will have ample opportunities with an offense that loves to grind and maintain possession. After five years in Miami, Carpenter has had no problem adjusting to the weather. In 2014, he had multiple games with over 12 points, giving a big boost to fantasy owners.

Supporting an offense that struggled all season, Folk led the league in field goal attempts. Folk attempted four or more field goals 5 of the last 6 weeks of 2014. The problem is that Folk led the league in attempts inside of 30 yards. The Jets could get close, but would sputter at the goal line and take the safe three from Folk. This trend should continue in 2015, as the Jets will continue to flounder on offense.

After a beast sophomore season that saw Tucker put up 41 field goal attempts, JT regressed slightly in his third professional year. Although the numbers are down, the problems may lie with the Raven’s offense. Tucker’s accuracy finished below 90 percent for the first time in his career, but he attempted more kicks than ever from beyond 50 yards. So Tucker struggled slightly as his kicks became more difficult. Whether it’s a real cause for concern or not remains to be seen, but Tucker is still a valued fantasy leg this season.

Blair Walsh made a splash in his 2012 rookie season, when he finished 10-10 on kicks from beyond 50 yards. Like Tucker he struggled in his third year, finishing with accuracy under 75 percent. But Walsh should get an offensive upgrade with the return of Adrian Peterson and the addition of Mike Wallace. Peterson is the player that turns 3rd and 3 from a stalled drive and a 55-yard field goal to a first down and a better opportunity. Walsh finished with only 29 extra points last year, the 24th best total in the NFL.

Bailey gets the nod here where other kickers with more attempts might rank higher. The reason is that Bailey banged home all 56 extra points last year, the best in the league. The odds that he repeats that number is slim, and any drives that don’t result in touchdowns end up as field goals for Bailey. With the Cowboys offensive line, they are a lock to move the ball on any team.

Crosby is another example of the old-school style of kicker drafting. With A-A-Ron at the helm, Crosby should be a lock to exceed 50 extra points for the fourth time in five years. Crosby struggled early but was clutch late, posting double-digit scoring efforts 5 times from weeks 8-14.

Nugent has come a long way since the expectations that came with being taken as a 2nd round pick in 2005. Nugent now has a comfortable role in Cincy, working with an offense that at times looks unstoppable. Despite a dip in accuracy (78%), Nugent still hit ten field goals from both the 30 and 40 yard range last season. The production of Nugent can be directly linked to the health of AJ Green. If Green stays on the field, Cincy will be more explosive, creating more chances for Nugent. 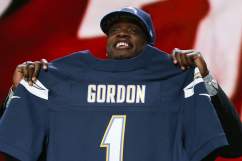