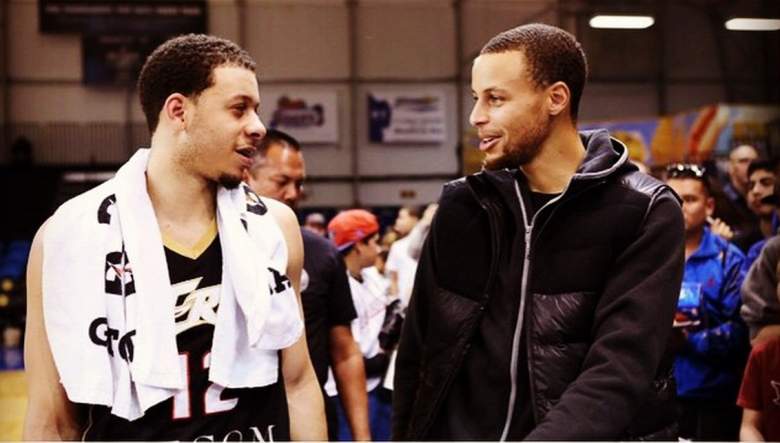 Sure, MVP Steph Curry is busy trying to lead the Golden State Warriors to the franchise’s first NBA title in 40 years. But what’s brother Seth up to these days?

The younger Curry, 24, has shown plenty of promise, most recently averaging 23.8 points in the NBA D-League for the Erie BayHawks, the affiliate of the Orlando Magic. But it has been a bit of a roller-coaster to becoming one of the most enticing shooting prospects in the D-League.

A 3-star recruit coming out of high school, Curry attended Liberty University. Although he wasn’t heavily recruited–sound familiar?–it was obvious from the onset he could play with the big boys. In his third game on campus, Curry dropped 26 in an upset win at Virginia. A few weeks later, he drained six threes on his way to 24 points in a close loss at Clemson. He ended the year averaging 20.2 points per contest, leading all freshmen nationally.

Seeking a bigger challenge, Curry transferred to Duke. He improved every year with the Blue Devils, culminating in a senior season in which he led the team in scoring (17.5 points per game), knocked down 2.7 threes per game and helped Duke to an Elite Eight appearance before losing to eventual national champion Louisville.

Curry’s first year out of college was a whirlwind. He went undrafted. He was signed by the Warriors to join his brother. He was waived by the Warriors. He had two 10-day contracts with the Memphis Grizzlies and Cleveland Cavaliers, which resulted in a total of 13 minutes of playing time. While he seemingly continued to move around, though, most of his time was spent with the Santa Cruz Warriors, where he averaged 19.6 points and made the D-League All-Star game.

During that same year, Curry played with Mychel Thompson, Klay’s older brother, to form the D-League version of the Splash Brothers:

Curry received another 10-day contract in 2014-15, this time with the Phoenix Suns, but he played just eight minutes before returning to the D-League’s BayHawks, who earlier acquired him from Santa Cruz. He made the All-Star game for the second time in as many seasons, finishing the year with averages of 23.8 points, 3.5 rebounds, 4.2 assists and 1.4 steals.

Although he will never have the impact of his older brother, Seth has established himself as one of the most deadly shooters in the D-League. Last season, he knocked down 3.6 threes per game at a 46.7 percent clip and hit 92.6 percent of his free-throws.

He may have his flaws, but NBA teams are always looking for players who can stretch the floor. As long as he keeps shooting and lighting up the D-League, he should get more chances in the Association in the coming years.