On Monday night when the Chicago Blackhawks take the ice to face the Tampa Bay Lightning in Game 6 of the Stanley Cup Final, they will have the opportunity to do something no team has done since the 2002 Detroit Red Wings — win a Stanley Cup in three of the last six seasons. The Red Wings “dynasty” of the late 90s and early 2000s won Cups in 1997, 1998 and 2002.

If the Blackhawks win on Monday night, it will put their star players in even greater company. Captain Jonathan Toews and Patrick Kane have already won a Conn Smythe Trophy each, and are one game away from having the chance to do it again. Although Toews and Kane are spectacular, defenseman Duncan Keith has, arguably, been the Blackhawks best player in the entire postseason, which is what the Award acknowledges. 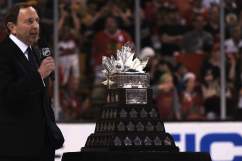 On the other side of the coin, if the Lightning win two games to win the franchise’s second Cup, the Award becomes a bit more open. Despite Lighting Conn Smythe front-runner Tyler Johnson scoring 13 goals — a Lightning franchise playoff record — he hasn’t scored in the Stanley Cup Final. His linemates Ondrej Palat and Nikita Kucherov have been more crucial to the team’s success over the last 10 games or so.

And then there’s Ben Bishop, a big goalie who has played great for most of the postseason and lackluster to bad at certain times. Bishop has been a factor for the Lightning and is a big reason the Lightning made it to a Game 6 of the Stanley Cup Final.

The odds below are odds provided by sportsbooks monitored by OddsShark and are subject to change; here are the updated odds to win this year’s Conn Smythe Trophy: