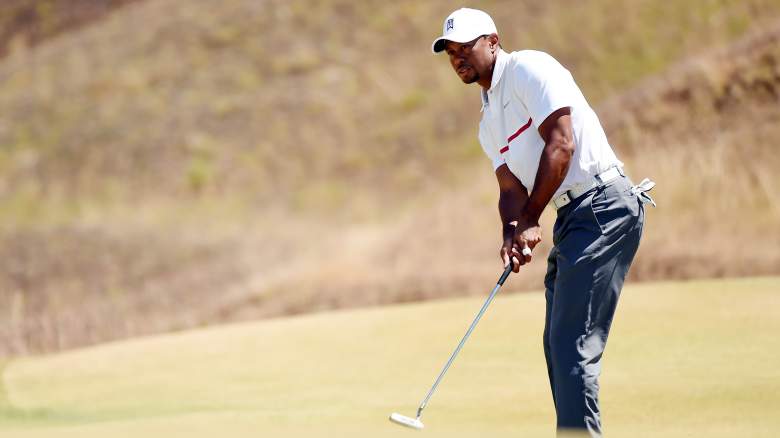 Tiger Woods shot plus-6 Friday, putting him at plus-16 for the U.S. Open. It’s the worst major score of his career. (Getty)

Well, it was better than Thursday. Tiger Woods at least has that going for him.

After shooting an 80, the worst round of his US Open career, Eldrick responded Friday with a nearly as dreadful six-over 76. He hit two birdies, which was one more than Thursday, but he scattered six more bogeys.

Here’s a look at Friday’s scorecard, courtesy of USOpen.com:

His round didn’t feature any tossed golf clubs like Thursday, but it did start with a tumble on one of Chambers Bay’s many steep hills:

Woods finishes his time at Chambers Bay at a ludicrous 16-over par. Assuming every single golfer playing during the afternoon Friday doesn’t suddenly forget how to move their arms, he will miss the cut at a major for the fifth time in his career and second time in the last three.

At the completion of his round, he was tied for 154th place with Lucas Glover, ahead of only one player–Darren Clarke, at plus-17–in the entire field. The continued demise of the former best golfer in the world has officially hit a new low.

Read More
Golf, Tiger Woods, US Open 2015
Tiger Woods' second round was slightly better than his first, but that's not saying much. He finishes the 2015 US Open with his worst ever score at a major.