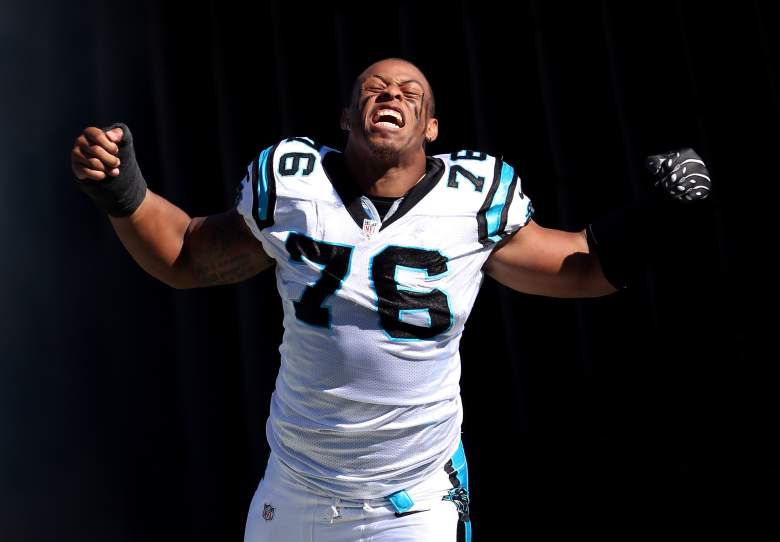 The former Carolina Panthers defensive end, who had been traded to the Dallas Cowboys this offseason, has seen his 10-game suspension reduced to just four games, the NFL announced on Friday afternoon. Hardy had been suspended for his role in a 2014 domestic violence incident.

According to Ian Rapaport, Hardy’s agent Drew Rosenhaus, the NFL Players Association and his lawyer will consider fighting the suspension even more, looking to get Hardy on the field as soon as possible once the 2015-16 season begins. But the question remains, why was Hardy’s suspension reduced in the first place?

Hardy missed 15 games last season after being placed on the Exempt/Commissioner’s Permission List after a two-month investigation by the league into his domestic violence incident in 2014 involving ex-girlfriend Nicole Holder. Hardy was, eventually, convicted on charges in a bench trial but the case was dismissed in North Carolina state court in February. Harold Henderson the arbitrator on the case, upheld Hardy’s suspension for conduct detrimental to the league but the overall punishment was ultimately reduced, in part, because his conviction came before the NFL changed its domestic violence police last August. That new policy gives a six-game suspension for a first domestic violence offense and a lifetime suspension for the second.

Henderson released a statement following the announcement, reinforcing that Hardy had violated the NFL Personal Conduct Policy, but adding that the original suspension was too harsh:

10 games is simply too much, in my view, of an increase over prior cases without notice such as was done last year, when the ‘baseline’ for discipline in domestic violence or sexual assault cases was announced as a six-game suspension. Therefore, the discipline of Mr. Hardy hereby is modified to a suspension of four games; all other terms of the discipline letter remain in place.

Hardy signed a one-year deal with the Cowboys in March worth up to $13 million.