John Daly is a signature player on the PGA Tour despite his drop in the world rankings. Thanks to his personality and sheer indifference for what people think about him, he has been extremely popular over the years and added some spice to pro golf.

An article reported of Daly:

John’s problems start and end between his ears. When he’s focused and in control, he can play with anyone. But there’s no telling when he will explode or implode. John has plenty of good people in his corner—the question is whether he will continue to listen to them.

Here’s what you need to know about Daly’s wives and family:

1. His First Wife Was Dale Crafton

The first of Daly’s soon to be five wives was an Arkansas girl named Dale Crafton. Crafton was a hand model and came from a wealthy family in Arkansas where she met Daly. Daly had been playing golf for the University of Arkansas before quitting school to go pro. While at school, he also developed his notorious drinking habit to please his coach who asked him to lose weight.

After he married her in 1987, she convinced him to live in her hometown of Blytheville, Arkansas even though he wanted to move. This was the beginning or rather continuation of his demise.

The marriage ended horribly and Daly was miserable in Blytheville. He succumbed to the pressure of trying to make it to the PGA Tour and support he and his wife. The pressure was too much and after more than two years of fighting, they divorced in February 1990.

2. His Second Wife Was Bettye Fulford

After his divorce with Crafton, booze and gambling took over his life.

Daly met Bettye Fulford two months after his first divorce while she was working as a hotel convention planner from Georgia. Fulford, a native of Georgia, dated Daly while he was rising to the top rankings in golf, until he succumbed once again to the bottle.

His respectable season fell apart when he passed out during an excessive drinking binge and woke up in a hospital without any idea of how he’d gotten there during an event in Maine. Bettye supported Daly during this time, but the two held off the wedding while he was playing.

Once again, Daly stress of competing on tour got to Daly. On top of that, Fulford confessed that she was 10 years older than she claimed, was divorced and had a 13-year-old son with her ex husband, all thing she failed to mentioned since she’d known him. Daly broke up with Fulford right before she told him she was pregnant with his child, but John started dating a Paulette Dean, a 20-year-old model at the time.

Fulford lashed out at Daly for turning his back on her and filed palimony and paternity suits against him. Daly ended up marrying Fulford after they had made amends and she had their and his first child, Shynah Hale the next month.

The birth of his daughter didn’t keep him away from the booze. In December 1992, Daly and Fulford got into a blowout fight during a Christmas Party hosted at their him in Castle Pines ending in violence. Daly broke a TV, punched holes in the wall and pushed his wife in the wall while pulling her hair in an inebriated state.

He took a four day trip directly after the fight where he admitted to having suicidal thoughts and when he returned home, he was arrested for third-degree assault thanks to the newspaper headlines who gathered the leaked story.

Following his arrest, the PGA suspended him and forced him to admit himself into an addiction treatment facility in Arizona where he completed a 30-day program. According to sources, his whole heart wasn’t into the treatment and he had not yet convinced himself that his alcoholism was a problem.

3. His Third Wife Was Paulette Dean

After Daly’s divorce with Fulford was finalized in 1995, he resumed his relationship with Paulette Dean whom he married that year.

Dean immediately got pregnant and had his daughter, Sierra Lynn who was born on June 1. Daly managed to stay sober, but his golf game continued to fall apart along with his marriage. After four years of on and off fighting and splitting up, Daly once again found himself single.

Dean has been linked to Roger Clemens as of recent.

4. His Fourth Wife, Sherrie Miller is Suing His Current Fiancee

In October 1999, he met Shanae Chandler who was also a recovering alcoholic. The two hit if off and Chandler dropped out of the University of Texas’ Journalism program to move in with Daly. The relationship moved quickly and Daly proposed to Chandler just two months later. After the announcement of the engagement he began binge drinking again.

The two got in massive fights, one publicly involving him throwing all of her clothes from their car in to a McDonald’s parking lot that ended in the Alabama Police’s involvement.

While he struggled to stop drinking and fighting with Chandler, he became infatuated with another woman names Sherrie Miller. Miller was a 25-year-old car saleswoman from Memphis, Tennessee with a one-year-old son named Austin. As soon as he met Miller, he ended things with Chandler and married Miller in July of that same year.

Miller gave birth to his third child, John Patrick Daly II a year later, but once again things took a turn for the worst. The same week Miller had their son, she and her parents Alvis and Billie were indicted under charges of involvement regarding an illegal gambling operation and million-dollar drug ring in Mississippi.

Daly’s Caddie and personal assistant, both of whom were longtime friends quit to avoid being associated with him and his wife.

Miller is now suing his current fiancee, Anna Cladakis for wrecking their marriage that ended in 2007.

Miller sued Cladakis and two purported employers in 2011 in DeSoto County, where Miller alleges Daly and Cladakis began their sexual trysts. Miller says the trysts began in 2007 while she was separated from Daly.

Miller appealed to the Mississippi Court of Appeals, which ruled that the lawsuit should be heard in DeSoto County because ‘the alleged sexual activity between Cladakis and Daly within the state of Mississippi, which contributed to the breakup of Daly’s marriage with Miller, constituted a tort committed, at least in part, within this state.

Since the sexual activities between Cladakis and Daly allegedly occurred in the state, witnesses and evidence may be found here. … we do not find it improper to bring her back into Mississippi to defend the alienation-of-affection case that arose out of those alleged activities. 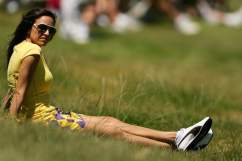 5. He Has Three Children

Although he has had a rough time with his love life, he managed to have three children among the turmoil. The first was with Fulford, his second wife, the second with his third and with his fourth wife.

Shynah is the oldest, followed by Sierra and then his only son, John Daly Jr.