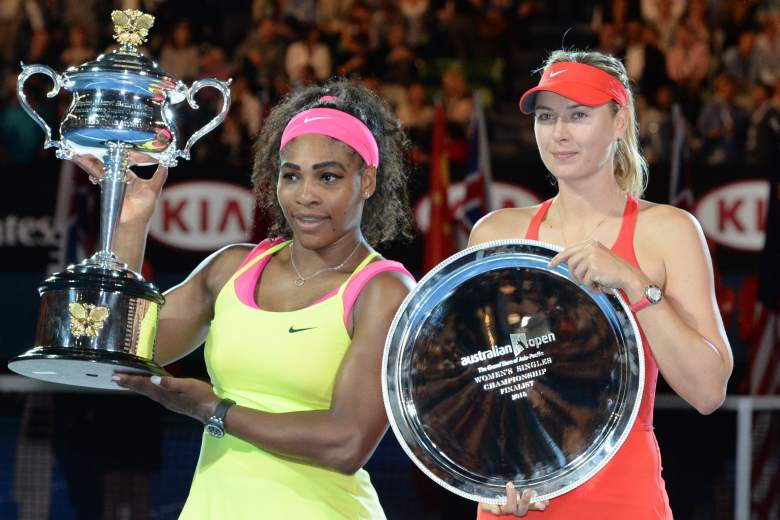 Williams and Sharapova at the 2015 Australian Open (Getty)

Maria Sharapova and Serena Williams square off in the semi-finals of Wimbledon this Thursday in what is, to be blunt, a grudge match with a side portion of loathing and a healthy dollop of venomous hatred for dessert. The leggy Russian hasn’t beaten the younger Williams sister in 16 previous attempts, while Serena has next to no respect for a woman she says is “still not going to be invited to all the cool parties.”

The Bulgarian 23-year-old has been dating Sharapova since 2013, when he chatted her up on email and started sending her roses by the kilo. He’s a regular in the player’s box when Maria is on court, which is all well and good. Except, prior to dating Sharapova, Grigor was in a relationship with one Serena Jameka Williams.

Not that Serena’s bothered, oh no no no. Per Rolling Stone, not too long after she and Dimitrov broke up: “She begins every interview with ‘I’m so happy. I’m so lucky’— it’s so boring… And, hey, if she wants to be with the guy with a black heart, go for it.”

Of course, Maria wouldn’t dream of stooping so low as to discuss a fellow player’s love life. As she demonstrated to reporters when asked about Williams’ comments: “If she wants to talk about something personal, maybe she should talk about her relationship and her boyfriend that was married and is getting a divorce and has kids.”

The divorcee with kids she refers to is Patrick Mouratoglou, Williams’ coach. Oh, and he used to coach Grigor Dimitrov, too. These tennis players really do need to expand their circle of friends, don’t they?

Click on the links below to read more about both Serena Williams’ and Maria Sharapova’s boyfriends, past and present.