"We decided to not give up." Devon Still accepts Jimmy V Perseverance Award on behalf of daughter Leah. His speech: http://t.co/gg47240QwH

The acceptance speech for the Jimmy V. Perseverance Award is typically one of the best moments of every year’s ESPY Awards, and Devon Still made sure that once again rang true in 2015.

Accepting the award for his five-year-old daughter, Leah, whose stage 4 neuroblastoma is now in remission but still wasn’t healthy enough to make the trip to Los Angeles, the Cincinnati Bengals defensive tackle delivered a memorable, honest speech.

What a freaking speech from Devon Still.

Devon Still with the speech of the year. 100% real. Praying for Leah. #LeahStrong

And I'm gone. Just a tremendous speech from @Dev_Still71 about his beautiful daughter Leah at the @ESPYS (tears all over the building)

The full amazing speech can be seen above.

Leah’s story, by now, is well known. Diagnosed with cancer in June of 2014, she was given a 50 percent chance at survival. But aided by the support of the Bengals and teams across the NFL, she fought courageously and ultimately had her tumor removed this March.

The strength exhibited by both Leah and Devon has been inspiring, making them the perfect choice for this award.

Named after former NC State basketball coach Jim Valvano, who delivered one of the most inspirational, moving speeches in sports history, the award has been doled out to a handful of memorable, deserving recipients in the past several years. The late Stuart Scott delivered another speech for the ages when he received the award in 2014, while others such as Anthony Robles, Eric LeGrand and Team Hoyt have recently been honored during memorable moments. 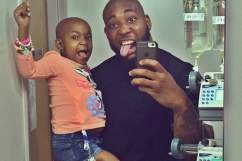