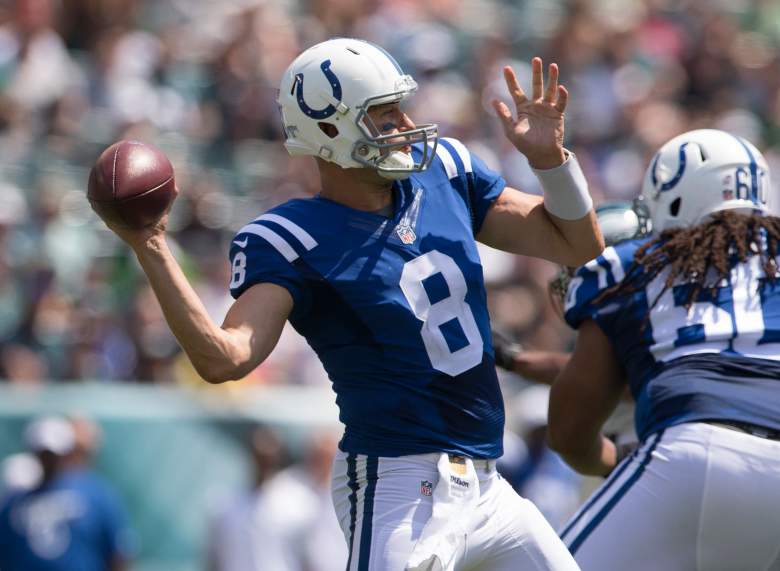 Matt Hasselbeck threw an interception and had a fumble in limited action on Saturday. (Getty)

Fourth-round rookie Jeremy Langford rushed for 80 yards on nine carries — including a touchdown run and a 46-yard scamper — and the Bears defeated the Colts 23-11 on Saturday night at Lucas Oil Stadium.

Langford has more than 1,500 yards in his final year at Michigan State, and showed an array of moves that may earn him time in the backfield once the regular season begins.

Starting quarterback Jay Cutler was also solid in the game, misfiring just once in leading a trio of field goal drives in the first half.

Andrew Luck led a touchdown drive for the Colts, who were shut out in the second half.

Though the Bears couldn’t find the end zone, Jay Cutler got them close with this impressive scramble at the end of the first quarter. Of course, Cutler would take a sack two plays later and a holding penalty ended any hopes of a touchdown; Gould’s second field goal made the score 6-0.

Andrew Luck Showed off Wheels to Score a Touchdown

VIDEO: Kyle Fuller beat on this catch by T.Y. Hilton, and Fuller called for a penalty. http://t.co/0LhQRdzDsv

After this bomb down the field to T.Y. Hilton, Andrew Luck would guide the offense into the end zone for the first time.
Perhaps the most underrated running quarterback in the NFL, Luck scored from five years out, and then converted the 2-point try to give the Colts a 8-6 lead in the second quarter.

Robbie Gould would respond with his third field goal of the game to give the Bears a 9-8 lead with about five minutes left in the second quarter. Adam Vinatieri kicked a field goal as the halftime horn sounded, and the Colts entered the locker room up 11-9.

Bears quarterback Jay Cutler played closed to a half, completing 8-of-9 passes for 69 yards.

A 46-yard run by fourth-round rookie Jeremy Langford set up a touchdown pass from Jimmy Clausen to Joshua Bellamy to give the Bears a 16-11 lead.

Langford Found the End Zone to Extend the Bears’ Lead

VIDEO: Jeremy Langford takes on the hit, goes the other way and scores. http://t.co/jAlKV0mrta

A Matt Hasselbeck fumble put the Bears in Colts territory, and Langford would score from two yards out to give the Bears a 23-11 lead.

Preview: Colts & Bears Meet in Week 2 of the NFL Preseason 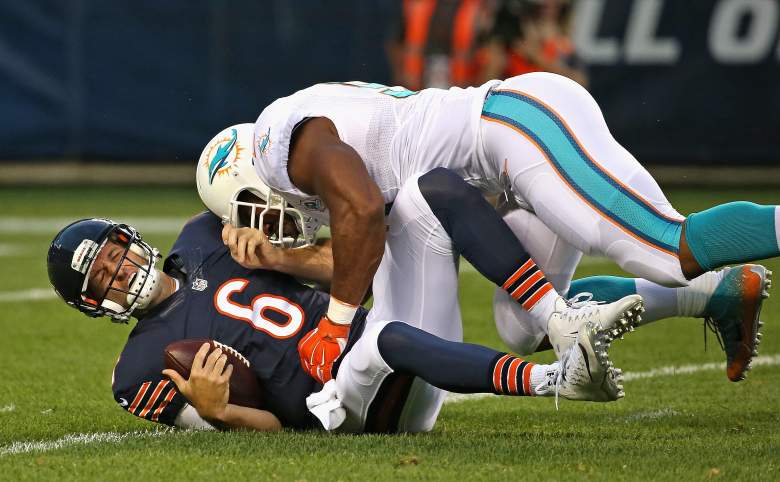 Jay Cutler (L) went 4-for-7 for 42 yards last week against the Dolphins. (Getty)

The Colts are the favorites to win the AFC this season and there is one reason why. Andrew Luck is about to enter the apex of career at 25-years-old and is coming off a season in which he threw for 4,761 yards and 40 touchdowns. The Colts have gone 11-5 in each of Luck’s first three seasons, and made it to the AFC Championship Game in 2014.

Chicago got a good look at Luck in a joint practice this week, and will get another in live action in Saturday’s matchup. The two teams will meet in next year’s regular season. While Luck is the media darling, Jay Cutler is the complete opposite.

Despite having a solid career by any standard, Cutler has long been the whipping boy for fans in Chicago and nationally, and that has continued into 2015.

The Colts were clobbered by the Eagles 36-10 in Week 1 of the preseason, while the Bears had a rough start before pulling away against the Dolphins.