The New York Jets were held to 123 yards of offense and Golden Tate and Greg Salas each caught touchdown passes as the Detroit Lions opened the preseason with a 23-3 win over the New York Jets on Thursday night.

Matthew Stafford led a touchdown on the opening drive for Detroit, and in preseason fashion four quarterbacks — Dan Orlovsky, Kellen Moore, Garrett Gilbert — would throw pass attempts for the Lions. The Detroit offense racked up over 400 yards of offense and went 9-for-15 on third downs.

Undrafted rookie Kyle Brindza kicked two 40+ yard field goals in the second half and added two touchbacks on kickoffs for the Lions. The former Notre Dame product was invited to training camp, but with Matt Prater signing a three-year contract it’s difficult to imagine Brindza making the team.

Jets quarterback Ryan Fitzpatrick played a series before exiting, and backup Bryce Petty played the majority of the game. He completed 10 of 18 passes for just 50 yards.

The Lions had no issue finding the end zone on their opening possession. Matthew Stafford first hit Golden Tate for a 22-yard completion, and then hit him again for a 35-yard touchdown against the Jets defense.

Rookie running back Ameer Abdullah has had a strong training camp, and it carried over to the preseason. This led to a Matt Prater field goal to make it 10-3 Lions.

The Jets fumbled on their opening possession in the second half, and the Lions took no time in cashing in. On the first play of the ensuing drive, Lions quarterback Dan Orlovsky hit Greg Salas for a 20-yard touchdown to increase Detroit’s lead to 17-3.

The Lions would add a pair of field goals and pitch a shutout the rest of the way.

Chris Ivory (L) will be the workhorse back for the Jets this season. (Getty)

The biggest story coming out of Lions training camp involves rookie running back Ameer Abdullah. The former Nebraska standout is tearing it up in training camp and some believe he may be a superstar in waiting. Abdullah will get his first live action on Thursday when his Lions host the New York Jets

Both the Jets and Lions struggled in different areas on offense last year; the Jets were dead last in passing yards per game while the Lions were 28th in rushing yards per game. the Lions selected guard Laken Tomlinson in the first round to try to add more punch in the run game.

The Jets will have a new man on the sideline this season as Todd Bowles takes over. The scheme won’t change much, though; Bowles employs an aggressive 3-4 defense that features even more blitzing than Rex Ryan’s defenses did. The Jets selected defensive end Leonard Williams sixth overall to make a strong unit even stronger.

The Lions defeated the Jets 24-17 at MetLife Stadium last season. 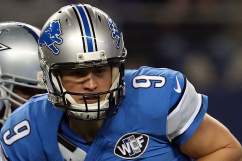 How to Watch Lions vs. Jets Live Stream Online