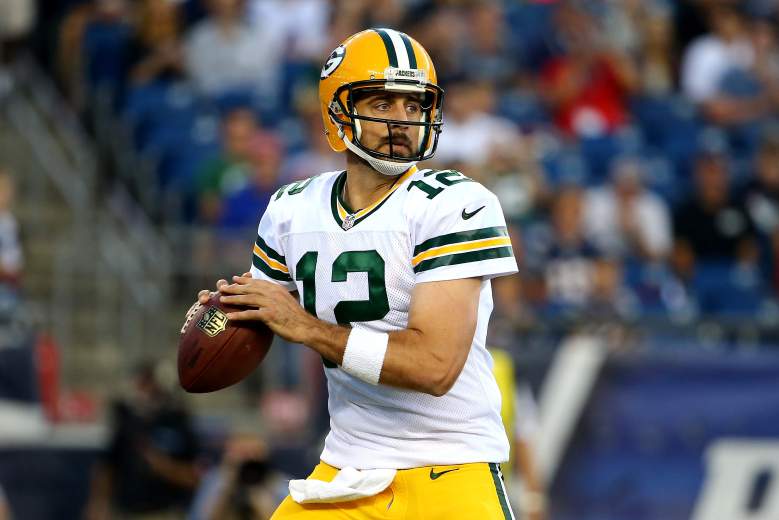 With Jordy Nelson out, should you start Aaron Rodgers in DraftKings Week 1? (Getty)

I understand the NFL season is still 3 weeks away, but I couldn’t help it.

Analyzing fantasy sports is what I do. And when I see DraftKings already with a slew of fantasy NFL contests to join with player salaries posted, well, I get a little giddy.

So we’re going to take an early look at some of those salaries, break them down, analyze them and see what we like and don’t like.

We’ll get started with the quarterbacks. I didn’t list every single starter below, but did most of them. And I certainly got the top QBs in this. But let’s be honest, I don’t think any of us are going to be using Brian Hoyer or the Bills or Browns eventual starter in Week 1. Sorry, Johnny Football. Maybe they’ll make me eat my words.

Keep reading for a breakdown and analysis of DraftKings’ Week 1 quarterback salaries:

Aaron Rodgers, Packers: at Bears, $8,600 — The biggest drawback to Rodgers is the Jordy Nelson injury. Those two absolutely destroyed the Bears in 2014, but without Nelson, you really shouldn’t be plunking down this much for Rodgers when we don’t know if anyone is going to step up.

Andrew Luck, Colts: at Bills, $8,300 — Luck was the highest-scoring DraftKings QB last year at 23.7 fantasy points per contest. Buffalo, though, allowed the fewest passing TDs and now with Rex Ryan in the fold, expect them to be even stingier. I’m avoiding Luck in Week 1.

Drew Brees, Saints: at Cardinals, $8,000 — Drew Brees lost all-world tight end Jimmy Graham and receiver Kenny Stills, leaving the veteran QB with a relatively unknown and unproven cast. While Arizona struggled vs. the pass in 2014, giving Brees the nod in Week 1 might be a bit premature with his newbie receiving corps. That could come back to bite me.

Russell Wilson, Seahawks: at Rams, $7,800 — Wilson had his best (43.12 points) and worst (9.26) fantasy games vs. the Rams in 2014. The Seahawks added Jimmy Graham in the offseason and Wilson did average the 3rd-most fantasy points among all QBs last year (21.9), but that Rams defense is on the rise. I’m leaning elsewhere Week 1.

Cam Newton, Panthers: at Jaguars, $7,600 — Now that stud WR Kelvin Benjamin is out, I’m not going with Newton. Certainly not in Week 1. Even against the Jags.

Matt Ryan, Falcons: vs. Eagles, $7,500 — The Eagles had one of the worst pass defenses in the league in 2014, but they will have 2 new starting cornerbacks this year. Still, at $7,500 we should be taking a long look at Ryan, who averaged 300 yards passing and nearly 2 TDs per game at home. The Ryan/Julio Jones combo is intriguing for Week 1.

Eli Manning, Giants: at Cowboys, $7,400 — I’ve been thinking of using Eli for weeks now. Good value price, against a team he has been crushing (12 TDs vs. Dallas in the past 2 seasons) and his best receiving corps probably ever. Manning the younger is the early favorite to get the Week 1 nod.

Ryan Tannehill, Dolphins: at Redskins, $7,400 — Tannehill has a revamped (better, also) receiving corp and is facing a Redskins team which gave up 35 TD passes in 2014. Washington added 2 new safeties, but Dashon Goldson and the unproven Jeron Johnson aren’t really going to scare opposing QBs. Tannehill is definitely in the mix for Week 1 honors.

Tony Romo, Cowboys: vs. Giants, $7,300 — Romo is coming off his best season and routinely torches the Giants (21 TD passes in the past 8 games). Great price, too. Thinking hard about ordering a Romo-Dez Bryant combo for Week 1.

Philip Rivers, Chargers: vs. Lions, $7,100 — The price is nice, but without TE Antonio Gates (suspension), I don’t think it’s a wise decision to use Rivers, even though he started last season with a bang. There just seems to be better options for Week 1.

Matthew Stafford, Lions: at Chargers, $7,000 — Same can be said for Stafford, although it shouldn’t be. With Calvin Johnson, Golden Tate and Eric Ebron, you’d think Stafford would be a viable candidate every week. Unfortunately, Stafford seems to be regressing. Look elsewhere in Week 1, but keep a close eye to see if he rounds into early career form.

Colin Kaepernick, 49ers: vs. Vikings, $7,000 — From a fantasy-perspective, and I guess also in real life, Kaepernick was wildly inconsistent in 2014. He lost Michael Crabtree and gained Torrey Smith. That’s likely not vaulting him into must-start status. 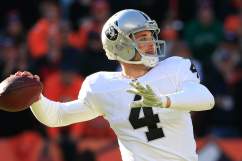 Honestly, there probably aren’t many viable options from this price range, but I did find a potential gem or two. If you go all out with your salary cap on your receivers and running backs, though, you’ll need to find a bargain quarterback. Some in this range could include:

Sam Bradford, Eagles: at Falcons, $6,900 — The Chip Kelly offense worked wonders for Nick Foles, now Bradford gets his shot to put up some big numbers. And he’ll be doing so at a bargain price against one of the more generous pass defenses in the league (Atlanta). Bradford could be your guy in you’re in a salary cap pinch.

Jay Cutler, Bears: vs. Packers, $6,800 — Cutler without Brandon Marshall is a little worrisome as he’s being replaced by rookie Kevin White. But the main reason I’d stay away is Cutler tends to have stinkers vs. the Packers.

Joe Flacco, Ravens: at Broncos, $6,700 — Flacco threw 27 TDs a season ago, but was inconsistent fantasy-wise, mixing in 25 point games with 12 pointers. Not exactly what you’re looking for. But this Week 1 matchup vs. Denver could be a shootout. And the price is right. It would be an upset if I did use Flac, though.

Teddy Bridgewater, Vikings: at 49ers, $6,600 — Bridgewater came on strong at the end of 2014, averaging nearly 19 points per contest. This Week 1 tussle with the Niners on the road isn’t exactly an ideal situation, though. While San Fran’s D might take a step back, you might want to monitor Bridgewater a bit before inserting him in your lineup.

Carson Palmer, Cardinals: vs. Saints, $6,500 — Palmer was off to fast start in 2014 before getting injured. We know he’ll throw it. And we know the Saints ain’t great at pass defense. There are worse options if you’re looking to save cash on your QB.

Andy Dalton, Bengals: at Raiders, $6,100 — Dalton took a step back in 2014 after throwing 33 TDs the prior year. Fortunately for Dalton, he’s getting back WR Marvin Jones and TE Tyler Eifert, who combined to play less than a full game last year. Jones caught 10 TDs in ’13, Eifert 2. Paired with a healthy AJ Green and Mohamed Sanu, and Dalton could be the sleeper play of Week 1 against the Raiders, who have allowed 90 passing TDs vs. just 29 INTs over the past 3 seasons. Don’t look too much into Dalton’s Preseason Week 2 performance. I’m not even going to share his stats (they were horrendous).

Others of note, though gambles to say the least: