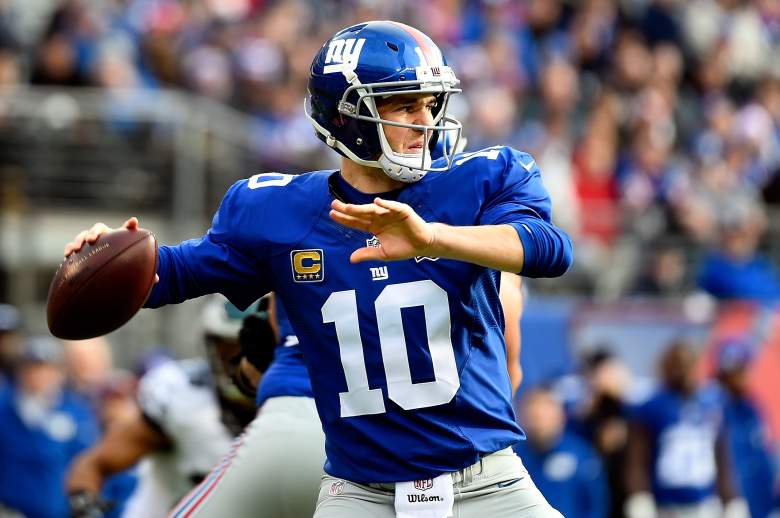 The NFL’s opening weekend is just around the corner and Heavy’s partners at DraftKings are hosting a free fantasy football contest to help kick the season off.

The contest gets underway on Sunday, September 13, so it excludes all players from the Pittsburgh Steelers-New England Patriots season-opener on Thursday, September 10.

The rules are pretty straightforward: You get a $50 million salary cap and you must choose 9 players you think will have the best stats in Week 1 of the NFL season between Sunday’s and Monday night’s games. The better your selected players do on the field, the better your fantasy does, the more money you make.

It’s a little early for making a lineup, but here are a few players I’m keeping a close eye on:

Andy Dalton, Bengals: at Raiders, $6,100 — Dalton had a down 2014, but WR Marvin Jones and TE Tyler Eifert are returning. Besides the Raiders have allowed 90 passing TDs vs. just 29 INTs the past 3 seasons. He could completely outperform his bargain salary.

Sam Bradford, Eagles: at Falcons, $6,900 — Atlanta had one of the worst pass defenses in 2014 and we all know Chip Kelly is going to let Bradford, who is healthy at the moment, wing it in what should be a shootout.

Eddie Lacy, Packers: at Bears, $7,500 — Maybe a little pricey, but the Packers are going to get Lacy a ton of touches in this game.

Carlos Hyde, 49ers: vs. Vikings, $5,300 — Hyde is a bit of an unknown, but what we do know is he’ll be the workhorse back vs. a mediocre-at-best Vikings front 7. Very nice price there.

Doug Martin, Buccaneers: vs. Titans, $4,500 — After 2 down years, Martin knows he has to produce. And there aren’t many teams as generous as the Titans. I’m watching the Martin/Charles Sims battle closely.

Chris Ivory, Jets: vs. Browns, $4,100 — Ivory no longer has to worry about Chris Johnson and should see all the early-down work in Week 1, which likely includes goal line carries. If he gets 20-22 carries, Ivory will be quite productive vs. the Browns.

Odell Beckham Jr., Giants: at Cowboys, $9,200 — Wide receivers who make a lot of catches will be in my lineup. ODB fits that bill. I’m strongly leaning pairing Manning and Beckham together.

Emmanuel Sanders, Broncos: vs. Ravens, $7,900 — Demaryius Thomas is Peyton Manning’s No. 1, but Sanders is a close second and $1,200 cheaper. He’ll likely see double-digit targets from a prolific passer; these are the types of receivers you want in your lineup.

Jordan Matthews, Eagles: at Falcons, $7,200 — Same as above … if I choose to play Bradford, Matthews is the Eagles receiver I will be pairing him with. Unless the $3,000 Josh Huff shows something in preseason Game 3, then he’s a total bargain.

Jarvis Landry, Dolphins: at Redskins, $5,600 — Landry and QB Ryan Tannehill developed quite the rapport in 2014, connecting 84 times. Now, they didn’t go for many yards, but the potential is there and Tannehill obviously feels comfortable throwing to Landry. That’s important.

Davante Adams, Packers: at Bears, $4,300 — With Jordy Nelson out for the year, it’s Adams’ starting job to lose. You can’t ask for a better situation; one of the league’s best QBs on arguably the best offense against a sub-par pass defense. And that price! Pay close attention to Adams in the next preseason game.

Eddie Royal, Bears: vs. Packers, $3,900 — Royal is the likely starter opposite Alshon Jeffrey with Kevin White out. He might be erratic, but Jay Cutler slings it. And if Royal gets 10-12 targets in Week 1, he could surprise.

Austin Seferian-Jenkins, Buccaneers: vs. Titans, $3,400 — The Titans were brutal vs. the tight end a season ago and a healthy ASJ is a prototypical end zone target.

Larry Donnell, Giants: at Cowboys, $3,200 — The Cowboys were the worst at covering TEs in 2014 and Eli Manning has shown a lot of trust in Donnell, especially in the red zone.

Richard Rodgers, Packers: at Bears, $2,500 — Rodgers could become the sleeper tight end of the year. He’s not the starter yet, but with Jordy Nelson out, there are more opportunities for guys like Rodgers.