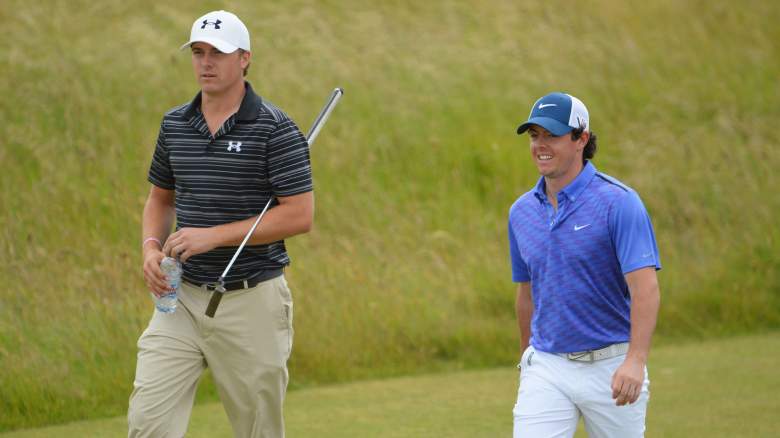 It’s one of the most anticipated Thursday-Friday pairings in recent golf history: Jordan Spieth, Rory McIlroy and Zach Johnson.

With all due respect to Johnson, who is coming off his second major win at the 2015 Open Championship, all eyes will be fixated on the former two at the PGA Championship.

For a while, it looked like McIlroy was ready to take over for Tiger Woods as the face of golf for the next decade or so, but in the last year, Spieth has quickly crashed the party, going from great to transcendent in 2015. The top two ranked golfers are young, unbelievably talented, accomplished and likely to be compared to each other for at least the next several years.

And for the first two rounds at Whistling Straits, they’ll be playing together (2:20 p.m. ET tee time on Thursday; 9:05 a.m. on Friday). When that has happened, McIlroy has held a distinct advantage:

Rory McIlroy & Jordan Spieth have been grouped together 8 times in @PGATOUR careers. Rory is -17 in those rounds, Spieth +5.

Let’s take a closer look at the pair of the burgeoning rivalry. 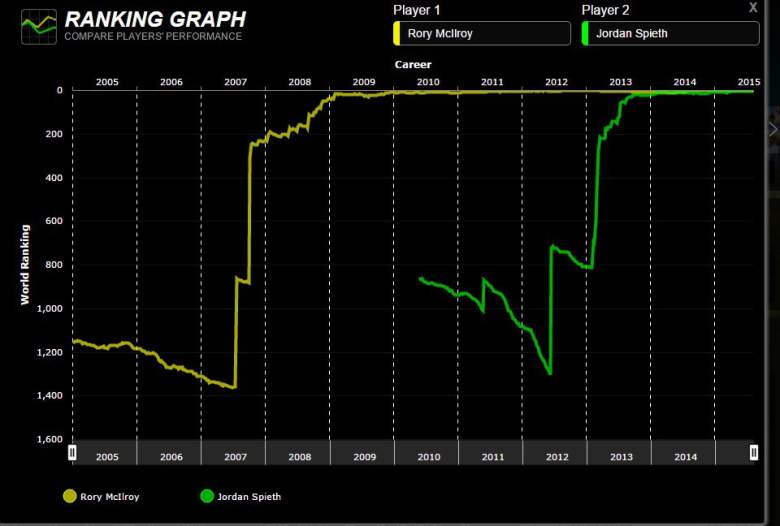 But the gap is quickly closing.

At the end of the 2014 season, McIlroy, who won both the Open and PGA Championships, was No. 1, while Spieth sat at No. 9. Rory’s seemingly insurmountable lead looked like a lock to hold through 2015, but Spieth has been steadily inching towards the top with wins at the Masters and the US Open, four victories overall, three second-place finishes and a ridiculous 13 top-10’s.

As Ryan Lavner of GolfChannel.com notes, Spieth doesn’t even need a win at Whistling Straits to surpass McIlroy, who has been out a month with an ankle injury. Here are the potential scenarios in which that happens, per Lavner:

• If Spieth is third alone and McIlroy misses the cut 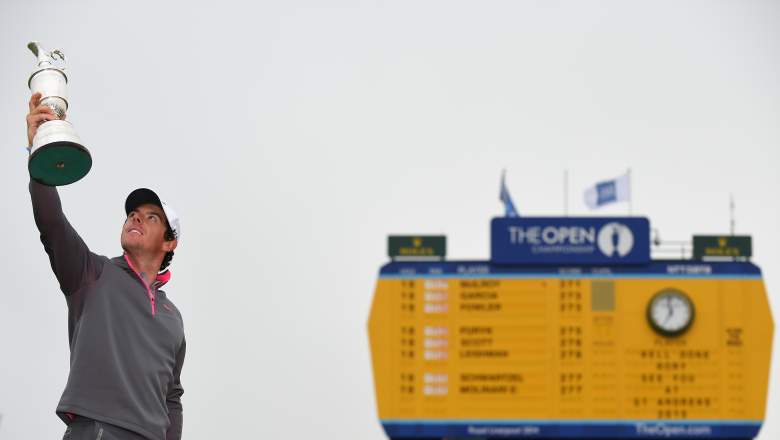 Rory McIlroy lifts the Claret Jug to the sky after his win at the 2014 Open Championship. (Getty)

Of course, this is partly due to the fact Rory has been on Tour longer. His first two major victories came at the 2011 US Open and 2012 PGA Championship, while Spieth wasn’t even a full-time professional until 2013. 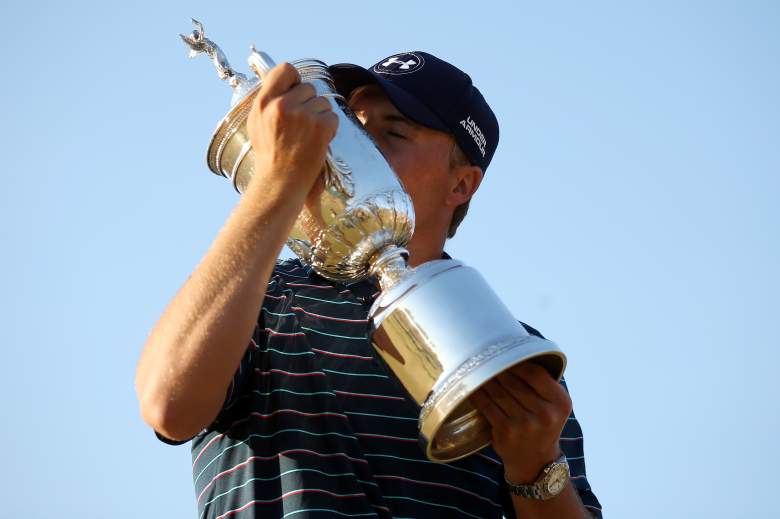 Jordan Spieth celebrates after winning the 2015 US Open at Chambers Bay. (Getty)

Again, it’s worth noting the gap is much closer over the last two years. Since the start of 2014, McIlroy has five wins, and Spieth has four.

During that span, the two have switched off dominating the sport. In 2014, McIlroy had three wins, two second-place finishes, earned $8.3 million in prize money and won a handful of awards, including PGA Tour Player of the Year. Thus far in ’15, Spieth has four wins, three second-place finishes, already $9.3 million in prize money and is on his way to all the same awards.

Rory McIlroy on this being the "Jordan Spieth Era": "Eras last about six months these days instead of twenty years. Just the way it is."

If both players enter 2016 at their peak, this could quickly transform into an all-time great rivalry. 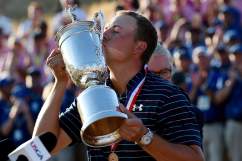 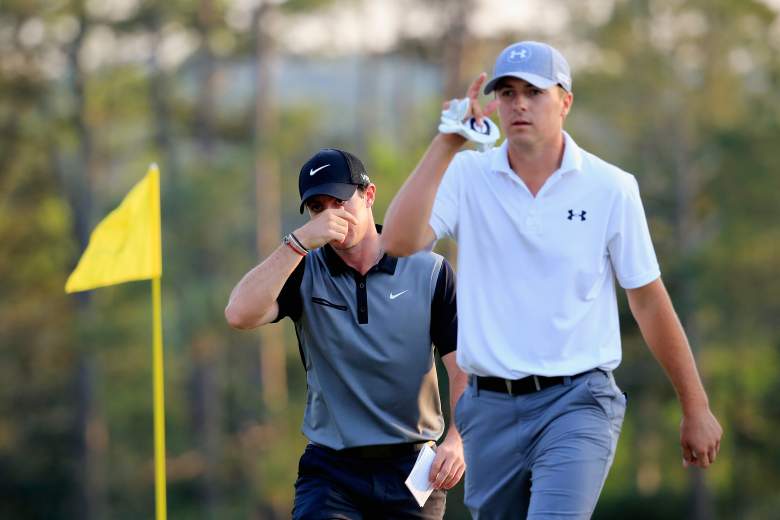 While most of the numbers favor McIlroy, it’s important to note he had a significant head start. McIlroy, 26, was born in May of 1989, while Spieth, 22, entered the world in July of 1993.

An interesting comparison can be made between Spieth’s current season, which is his third year playing double-digit Tour events, and McIlroy’s 2012 campaign, which was his fourth. In 2012, McIlroy won one major and four events, had 10 top-10 finishes and missed the cut three times. So far this year, Spieth is at one more major win, the same amount of Tour wins, three more top-10’s and one less cut.

The estimated numbers, which are extremely rough, come from CelebrityNetWorth.com.

McIlroy has made nearly $28 million in PGA Tour prize money, and in 2014, he signed a deal with Nike worth at least $100 million. He has also taken over for Tiger Woods as the namesake for EA Sports’ yearly golf video game, which is now named “Rory McIlroy PGA Tour.”

Spieth’s $16 million estimate feels slightly low considering he’s made over $17 million alone in prize winnings. He also recently signed a 10-year deal with Under Armour and has other endorsements with AT&T, Rolex and Titleist.

Golf Digest’s Ron Sirak wrote that Spieth’s Masters win earlier this year would triple his off-course income, and the arrow is only continuing to point up for the 22-year-old.