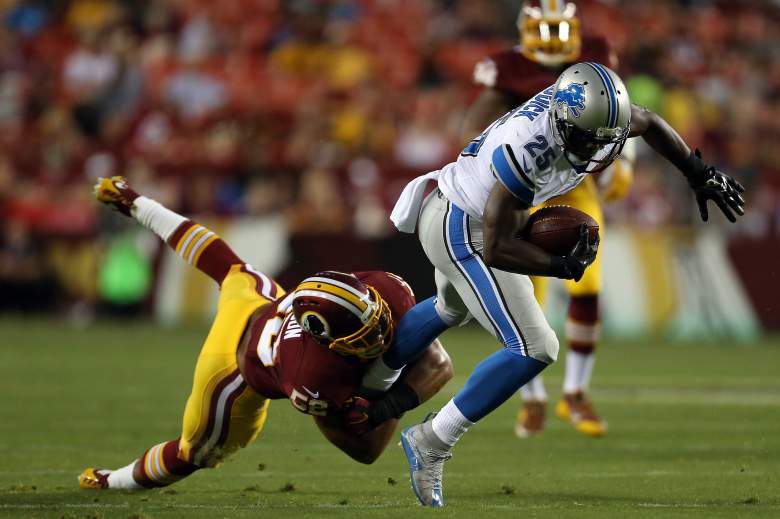 It wasn’t exactly pretty but the Washington Redskins notched a come-from-behind preseason victory over the Detroit Lions on Thursday night.

Of course, the focus of the game was the second quarter injury to Robert Griffin III. The Redskins starting quarterback left the game after taking a hard hit, trying to recover his own fumble. Griffin left the game with a shoulder stinger and a head injury but was able to walk to the locker room under his own power. Griffin was hit on six of his eight drop backs and one other pass attempt was batted down. In other words, it was not RGIII’s night.

Gruden says RGIII suffered a concussion and is following concussion protocol at this time. Shoulder is okay.

Kirk Cousins was a positive passing note, finishing with 91 yards and one touchdown, but it was Washington’s run game, and its rookies, that led to the victory. The Redskins finished with 179 rushing yards while holding Detroit to just 46. Dan Orlovsky led the Lions through the air with 118 yards and two touchdowns. For a full box score, click here.

Kirk Cousins Led the Redskins on a Game-Winning TD Drive

Kirk says "take that Colt," and throws a touchdown pass of his own.

14 play, 80 yards, 5:56. That’s how long it took Kirk Cousins to officially make his case as the Washington Redskins backup quarterback.

Cousins found Rashad Ross for a four-yard touchdown pass on fourth down to put Washington up 21-17 on Detroit with 10:47 left in the fourth quarter and the long-time quarterback looked good under center. In fact, from the time he came into the game to the time he found the end zone, Cousins went 5-for-8 for 62 yards and a 126 QB rating.

That tweet just about says it all. The rookie recorded his first NFL touchdown – at least in the preseason – with a five-yard haul late in the third quarter to put the Lions back in the lead.

Zenner had been a standout all night and by the time he found the end zone, with 1:43 left in the third quarter, he he caught a team-high five catches for 59 yards, including a long of 36.

The Redskins Took the Lead Midway Through the Third Quarter

Rookie receiver Reggie Bell gave Washington a lead midway through the third quarter, hauling in a 19-yard touchdown reception from Colt McCoy. The play capped off an eight-play, 87-yard drive that was, perhaps, the first time the Redskins looked cohesive all night.

Colt McCoy did a good job on his last few throws of getting the ball out on time; hit that plant foot and throw. Touchdown to Bell.

But while McCoy looked more comfortable in the pocket, the key to the drive was a 38-yard dash by rookie running back Trey Williams. It’s the night of the Washington rookies; apparently. 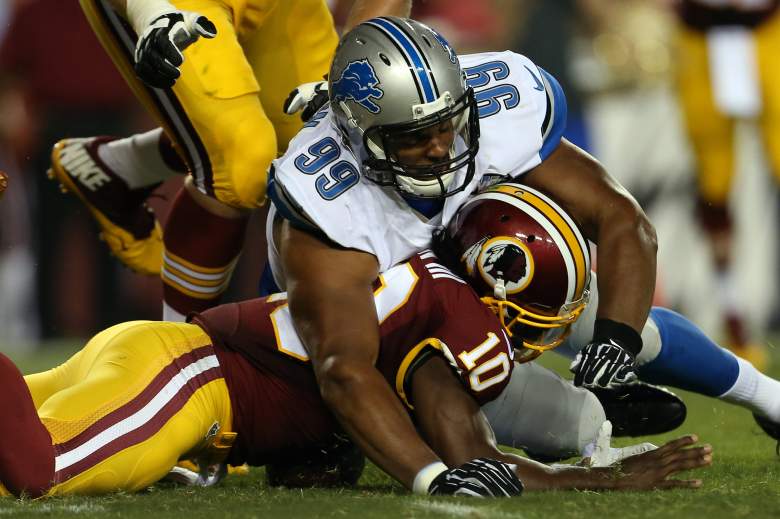 That was simply just not a good 30 minutes of football for the Washington Redskins. Between RGIII leaving the game with a shoulder injury to an offensive line that didn’t do much of anything, things seemed like they couldn’t get any worse. Then they did.

Washington finding new and creative ways to turn the ball over. pic.twitter.com/51KKMc9PXM

Colt McCoy led the Redskins to the one yard line with two seconds left in the first half and it looked like Washington was primed to take the lead into halftime. Only, the ball slipped through McCoy’s hands and landed about 30 yards behind him as the Lions picked it up and ran. Detroit didn’t make it into the end zone but that’s a pretty good microcosm of how this game was going.

At the break, Washington had actually out-gained the Lions 128-to-108 thanks to 92 yards on the ground. Matt Staffard finished his night 6-for-8 for 78 yards while Griffin went 2-for-5 for eight yards before heading to the locker room.

RB Matt Jones gets some points on the board for the #Redskins! #DETvsWAS https://t.co/6oPYOqQdPP

Welcome to the NFL, Matt Jones. The rookie running back gave Washington something (anything) to feel good about with a late first half touchdown run to get the Redskins on the board.

But it wasn’t just Jones’ one-yard touchdown run that had Washington feeling just a little bit more confident. Check it out:

#Redskins are on the board! Take a look at that last scoring drive. #DETvsWAS #HTTR pic.twitter.com/d0OJkp5Gb7

Jones got the drive off to a solid start with a 24-yard sprint up the middle of the field and the play was good enough that Clinton Portis actually stopped his sideline interview on the game stream to cheer.

An RGIII Fumble & Injury Led to a Lions Touchdown

That’s probably not how the Washington Redskins drew it up. After Robert Griffin III left the game with an apparent shoulder stinger in the second quarter, the Detroit Lions capitalized on fantastic field position to find their way into the end zone for the night’s first touchdown.

Dan Orlovsky found Jeremy Ross for a three-yard touchdown pass, capping off a four-play, 11-yard drive with 7:31 left in the first half.

It wasn’t pretty. The Washington Redskins offensive line did not do much of anything to protect their quarterback in the first 15 minutes of play and Griffin took the brunt of the mistakes by being hit – a lot.

What the heck? Willie Smith blocks down; no one blocks the DE? Griffin hit again.

By the end of the first quarter, the Redskins notched one first down and Griffin went 2-for-5 through the air for -1 yards. That’s not a lie. That’s a real stat.

The Lions Got on the Board First

Prater blasts a 49-yard FG through the uprights to give the #Lions a 3-0 lead on the offense's first drive. #DETvsWAS

It was a bit of a mixed bag for the Detroit Lions on their opening drive. Matthew Stafford had flashes down the field, including a good pass and catch with Golden Tate that got the Lions into Washington territory.

Then, it stalled a bit. Plays got broken up at the line of scrimmage, Stafford got sacked by Redskins corner back Justin Rogers on third down and the Lions were forced to settle for a field goal.

But here’s that mixed bag again. It was a really good field goal. 49-yards, in fact. Welcome to preseason football emotions.

It’s still preseason, so there are still a handful of players who won’t be making it onto the field tonight. Here’s who’s sidelined for week two:

Crowder is in uniform and in pads but just to go through warmups. Not playing tonight. 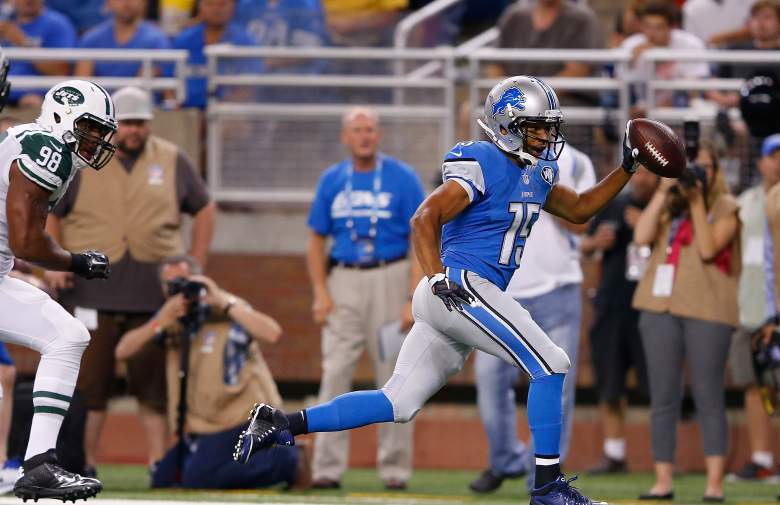 Let’s go, week two. We’ve gotten through the first game, battled through some already heinous injuries and broached the media penchant for stirring up controversy, so who’s ready for some more football?

The Detroit Lions and Washington Redskins square off in a preseason battle on Thursday night, looking for a bit of consistency after their initial 60 minute return to the gridiron. Heading in there, there are a few questions each team has to be ponder.

For Detroit, the running game received the offensive spotlight last week thanks to a solid performance by rookie Ameer Abdullah who has already drawn comparisons to Lions great Barry Sanders. Premature? Sure. But now Abdullah has been put No. 2 on the Detroit depth chart and there are rumblings of mistrust in the ranks. Also premature? Sure again. The expectations, though, are high for Abdullah and he’s going to have to prove, very quickly, that he’s not a flash in the preseason plan.

Meanwhile, Redskins fans are wondering how much time Robert Griffin III will get after playing minimal snaps in the preseason opener. Washington coach Jay Gruden said that Niles Paul’s season-ending ankle injury kind of took the wind out of everyone’s opening sails and prompted him to take some starters out earlier than planned. That might change this time around and, if history repeats itself, Griffin can be expected to play two or three series with the first-string offense.