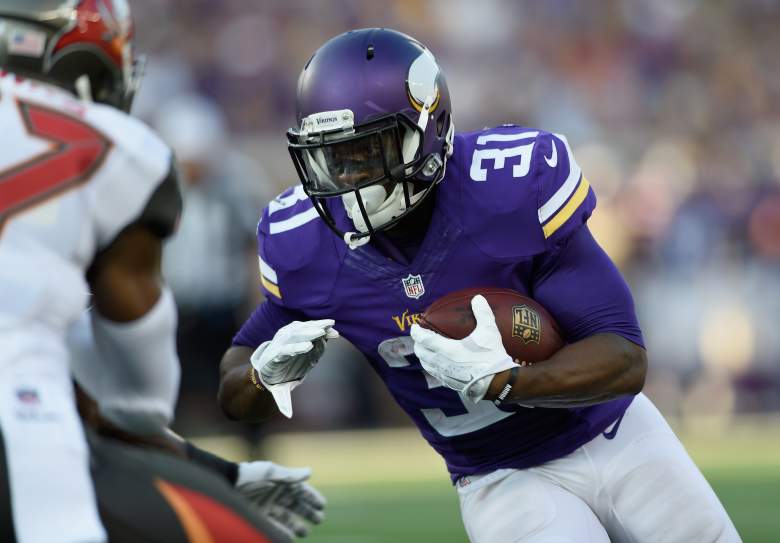 Jerick McKinnon will be busy in the preseason with the absence of Adrian Peterson. (Getty)

The Vikings ran their preseason winning streak to eight games going back to 2013 with a 20-13 win over the Oakland Raiders on Saturday night.

Lightning in the area caused a 65 minute delay with 6:45 left in the second quarter. The Vikings took the lead for good right before halftime, and controlled the second half by forcing three turnovers to keep their exhibition streak alive.

One Vikings player who will want to burn the game tape is kicker Blair Walsh. In addition to missing an extra point, Walsh was 0-for-3 on field goal attempts. Walsh also struggled last season, going 26-for-35 on field goals.

The Raiders got a big play from rookie Amari Cooper, but struggled to stay on the field by going 5-for-14 on third downs.

After several possessions where defenses held firm, the Raiders got on the board first with 3:22 left in the first quarter. Derek Carr hit Amari Cooper for a 40-yard gain, and Latavius Murray would score from two yards out for the game’s first points. Murray tried to convert the 2-point conversion, but was stopped short of the goal line.

Teddy Bridgewater Threw his 1st Touchdown Pass of the Preseason

The Vikings responded to the Raiders touchdown drive with one of their own, with Teddy Bridgewater hitting Charles Johnson for a 10-yard score. Blair Walsh missed the extended extra point, and the game was tied at 6-6.

No football in Minnesota for now, probably a good call. pic.twitter.com/rEoDL499X2

With 6:45 left in the second quarter, a storm front came in and caused a delay for lightning near the field.

Chase Ford hung on to make a spectacular catch late in the first half. WATCH: http://t.co/yueKcKGlc5 pic.twitter.com/j1csIZ8dfD

After the lightning delay, the Raiders took a 9-6 lead with a field goal before the Vikings struck back. Shaun Hill threw his third touchdown pass in two games, this time to Chase Ford. Walsh made the PAT this time to give the Vikings a 13-9 lead at halftime.

TOUCHDOWN!!! Blake Renaud takes the handoff and finds the end zone to give the #Vikings a 20-12 lead.

Vikings linebacker Brian Peters intercepted Matt McGloin and almost returned it to the house, but three plays later Blake Renaud scored from a yard out to get the seven points. 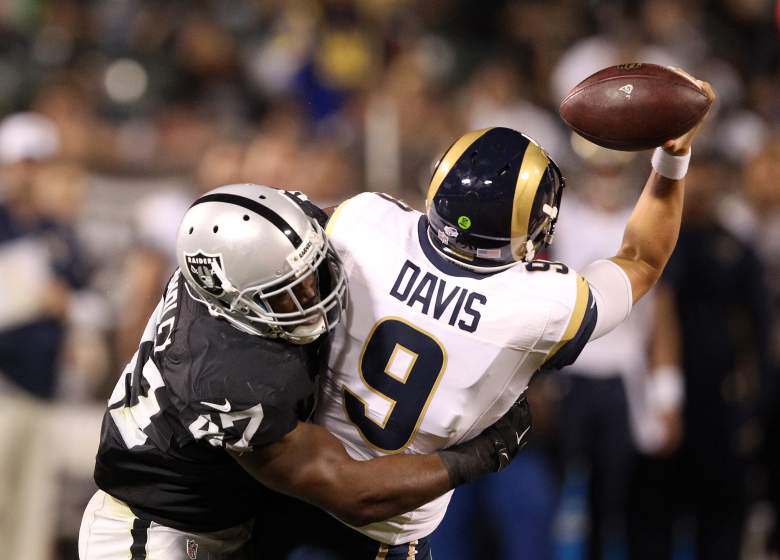 The Raiders held the Rams to 285 yards and three points last week. (Getty)

A pair of proud franchises who have not enjoyed recent success in the last decade will meet in preseason action on Saturday. The Vikings and Raiders met in Super Bowl XI, but have been shut out of the big game since the Raiders made it to the Super Bowl in 2003.

Oakland’s Derek Carr and Minnesota’s Teddy Bridgewater are providing fans hope after solid rookie seasons that they may be on the way back to being contenders. Bridgewater has completed 12-of-14 passes for 130 yards in two preseason games, while Carr and rookie wideout Amari Cooper connected on several passes against the Rams last week.

Vikings right tackle Phil Loadholt was lost for the season last week when he tore his Achilles, leaving fourth round rookie T.J. Clemmings to earn the spot. Second-year linebacker Anthony Barr is expected to make his preseason debut.

The teams will also meet in Week 10 at the O.Co Coliseum. Oakland leads the all-time regular season series 10-4.

Read More
Football, NFL, Raiders, Vikings
The Vikings defeated the Raiders 20-12 in preseason action on Saturday. Check here for stats and highlights of the game.