Ronda Rousey can take down opponents in seconds. She’s done it. More than once. She can attack and compete and it isn’t unreasonable to call her the most dominant athlete of her generation.

But how did Rousey get to this point? What sparked that fierce determination and who was the driving force behind that competitive spark in the octagon? Easy. Her family.

It has not been an easy road to dominance for Rousey and while some of those obstacles have come from within that very same family that inspired her, the relationships and the support she has received far outweighs the challenges. Now, as she looks to defend her UFC title against Bethe Correia, Rousey’s family will be there, once again, supporting here. Here’s what you need to know about the group:

De Mars, who was born on Scott Air Force Base in 1958, made American athletic history when she became the first U.S. woman to win at the World Judo Championships in 1984. She competed, and won, in the -56 kg class and boasted a Rokudan, sixth-degree black belt status.

She got her start in Judo at the local YMCA, learning the sport before her first competitive finish at the USJA Junior Nationals when she was just 16. After earning her MBA from the University of Minnesota, De Mars continued to compete and enjoyed success in 1983 at the Pan American Games and Senior Nationals. 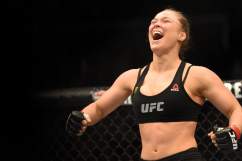 Rounda Rousey at the ESPYs: 5 Fast Facts You Need to Know

2. Rousey Credits Her Mother With For Her Athletic Success

Throughout her dominant career, Rousey has credited her mother, and her support, for her success in and out of the octagon. When Rousey dropped out of high school, she started competing in Judo, following in her mother’s footsteps and adding her own line in the sport’s history when she won the bronze medal at the 2008 Beijing Olympic Games.

However, while her mutual interest in sports may have sparked Rousey’s relationship with her mother, it’s what De Mars has done since leaving that athletic world that has been most impressive.

After walking away from regular competition, De Mars earned her MA and PhD in educational psychology and also co-founded Spirit Lake Consulting, a company that strives to improve life on Indian reservations. In 2006, she was elected Vice President of the USJA and, in 2008, was hired by the University of Southern California ITS Customer Support Department as a Statistical Consultant.

3. Her Father Committed Suicide When Rousey Was Eight Years Old

Rousey has faced challenges throughout her life, but perhaps none as challenging as her father’s suicide when she was just eight years old. Ron Rousey broke his back while sledding with his daughters and after learning that a blood disorder would prevent him from healing properly, he took his own life.

Rousey’s personal struggles have been brought back into the spotlight recently after her upcoming opponent Bethe Correia was quoted saying she hoped Rousey “does not kill herself” when she loses her UFC Women’s Bantamweight Championship. Of course, Rousey did not take kindly to the comment and, in an interview with TMZ, essentially said she intends to make Correia suffer by dragging out the beating as long as possible. She said:

It’s definitely not going to be an Instagram fight. If I beat you quickly, that’s me at my nicest and most merciful. That means you get to go home unscathed with a paycheck. If I make the fight last longer, that means I don’t like you and I want you to go home looking different than the way you walked in. And I don’t like this chick.

4. Rousey’s Sister Maria Burns-Ortiz Co-Wrote ‘My Fight/Your Fight’ With Her

Rousey has two older sisters, Maria Burns-Ortiz and Jennifer Rousey, both of which she’s incredibly close with after growing up together in California and North Dakota. That relationship took a slightly professional turn earlier this year when Rousey worked with Burns-Ortiz to write and publish My Fight/Your Fight.

The book chronicles the ups-and-downs of Rousey’s life before, during and after her decision to compete on the UFC circuit and highlights her raw determination to win o matter what.

Burns-Ortiz has also worked as a journalist for a handful of publications including ESPN.com, Fox News Latino, and the Associated Press. She was also named the National Association of Hispanic Journalists’ Emerging Journalist of the Year.

5. She’s Very Protective of Her Siblings

Rousey understands her role outside the cage, particularly her role within her family. For better or for worse, whether she likes it or not, she is a role model. She’s the person her siblings, including her younger sister Julia, look up to.

It’s a role she’s taken on with the same desire and focus she has whenever she’s competing on the UFC circuit. In fact, this might be even more important. She said:

Rousey is anxious to get more and more girls involved in sports, but she isn’t simply focusing on fighting sports and, as she puts it, getting “punched in the face like her big sister.” She’s a role model, sure, but she doesn’t need her sister to follow exactly in her footsteps.