Vince and Bianca Wilfork are one of the NFL’s most unique stories. (IG @teamwilfork)

One of the best big men in the modern NFL, Vince Wilfork has been a staple in the middle of defensive lines for over a decade. During his 11-year career, Vince has been named to five pro bowls and has twice hoisted the Lombardi Trophy.

He didn’t. And he has Bianca to thank.

Vince and Bianca Wilfork comprise one of the NFL’s most outspoken pairs. Vince is no ordinary lineman, and Bianca is no ordinary WAG. While Wilfork pushes the pile on the field, Bianca pushes paper. She has helped Vince with contract negotiations, charitable efforts and marketing platform. Bianca is far more involved in Vince’s NFL career than most wives, and the pair are sure to be seen on HBO’s Hard Knocks as Vince begins his 12th NFL season with the Houston Texans.

Here’s more about Bianca and Vince:

Vince first spoke to Bianca in October of 2001 (IG @teamwilfork).

The Wilforks met by pure chance in 2001, when Vince was a freshman at the University of Miami. He was with a friend browsing blackplanet.com, one of the first major social media hubs of early Internet. Vince (heyhey75) noticed a pretty light-skinned Cuban woman (miamib), and sent her a brief message with his friend’s phone number. Bianca responded, and the talking, which started as nervous introductions, soon became lengthy, personal conversations.

At the time of meeting, Vince and Bianca were both in Florida, but may as well have been on different planets. Vince was in his first year at Miami, coming off being named the top high school football player in Florida. Bianca had just thrown her baby’s father out of the house after a five-year relationship, and was working two jobs while raising a son.

2. Bianca Was There During Vince’s Darkest Time

As the months passed a bond formed between Vince and Bianca. That bond was tested in 2002, when Vince’s father was hospitalized. Vince and his father were extremely close, but David Wilfork struggled with diabetes and passed away in June of that year.

Bianca, normally a vocal and outspoken woman, was apprehensive about involving herself in Wilfork family affairs. Vince’s mother, Barbara, was initially disapproving of Vince and Bianca living together, but her tone changed when she was learned Bianca was making sure Vince did his schoolwork. Barbara and Bianca grew close, but the relationship was not long. Barbara suffered a stroke November that year and passed away a month later. Within the span of six months, Vince lost both his parents.

At the time Vince was devastated, and seriously contemplated quitting football. All he wanted was to make his parent proud in the NFL, and he thought playing would be pointless. Bianca brushed that notion aside, and pushed Vince to make his parents proud, not letting all his hard work go to waste.

3. Bianca and Vince Have Had Two Children Together

With Bianca handling everything, Vince only worries about football and fatherhood. (IG @teamwilfork)

When Vince first met Bianca, she was attempting to raise her son, D’Aundre, on her own. She also didn’t want to date a lot, so as not to bring unwanted stress on her son. Everything changed when she met Vince. D’Aundre was apprehensive at first but like most other people, he quickly took a liking to the big man.

For the Wilforks, some of their happiest moments have derived from sadness. Their first daughter, Destiny Barbara, was born shortly after the death of Vince’s mother. Their second child, David Dream-Angel, was born in 2009 after several failed pregnancies. Perseverance paid off, and the Wilforks feel blessed they have a complete family. 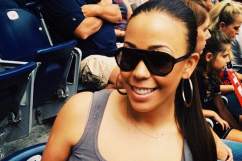 4. Bianca Handles Business So Vince Can Focus on Football

When the Patriots need to get in touch with Vince, they know to call Bianca (IG @mrs75)

Since the beginning of their relationship, Bianca has pushed Vince to be his best, as well as manage his life outside of football. In his Miami days, Bianca spoke with professors about Vince’s assignments. Bianca grilled would-be agents as Vince was preparing to turn pro, and even today the Patriots know that all business runs through Bianca. Bianca has said as much in interviews:

There really is no Vince Wilfork without Bianca. She pushed him through school, handles his business in the NFL, and is working on more promotional opportunities for Vince. In addition to handling Vince’s business, Bianca is working on herself. She received an online associate’s degree from the University of Phoenix and is pursuing her bachelor’s degree. 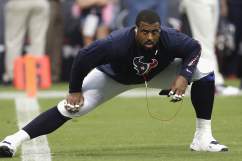 5. Bianca Helped Vince Bounce Back From His Achilles Injury

After many thought an Achilles injury would end Wilfork’s career, Bianca helped Vince recover and bounce back strong. (IG @teamwilfork)

In 2012 Vince had his best year as a professional, and was named First-Team All-Pro. The next season, his season was cut short after going down during the first quarter of the Patriots’ Week Four contest against the Falcons. It was revealed that Vince had torn his Achilles, and he would miss the remainder of the season. For a man of Vince’s size, a torn Achilles at the age of 32 would be an acceptable reason to not play football again.

Bianca was not having any of that.

Her and Vince worked tirelessly in the offseason, slimming down and regaining strength. Bianca would sometimes wake Vince as early as 5 a.m., and Vince went into training camp in 2014 feeling better than ever. In his first practice, he told reporters about his training and recovery:

If Vince is around, you can guarantee Bianca will be right beside him. Or texting him from the sidelines.