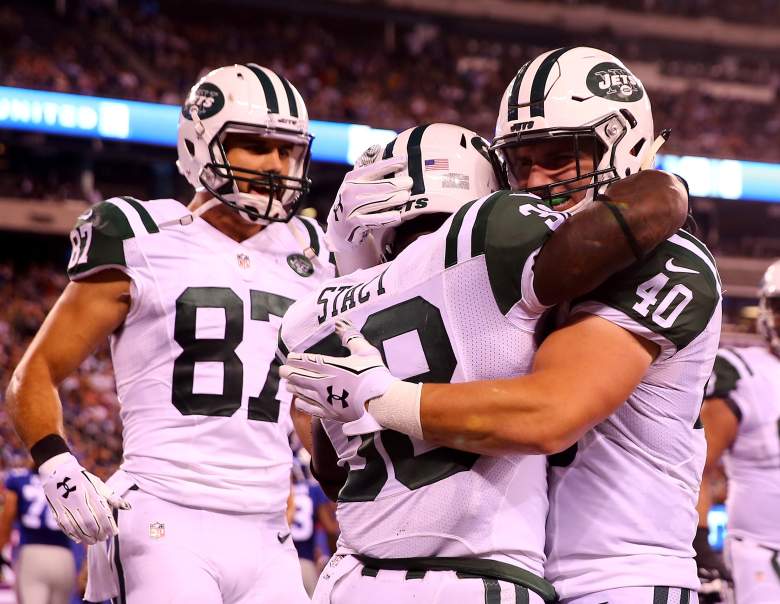 The New York Jets are hoping that their offense, including a potent run game, can help jumpstart a week 1 victory over the Cleveland Browns. (Getty)

The New York Jets first-year head coach has survived one of the most adversity-filled preseasons in the NFL, dealing with whatever his tabloid-ready team had to throw at him. Literally. But now, Bowles, he of the defensive mind set and calm sideline presence, is ready for the regular season and Sunday afternoon’s opener against the Cleveland Browns.

“I know what I signed up for,” Bowles told reporters earlier this week. “This is the NFL. We’re not in needling class or anything like that. There are going to be things that come up every day that you have to deal with.”

On Sunday, Bowles and the Jets will have to deal with Cleveland, a team looking to snap a historically bad early-season losing streak with plenty of questions still surrounding its roster. Josh McCown is expected to start on Sunday but he may just be the precursor to Johnny Manziel. That’s right. It’s time for Johnny Football again. After his headline-making rookie year the former Heisman Trophy winner is poised to take a much bigger role in the Browns offense this season. Whether or not that’s a good thing remains to be seen.

Kickoff for the AFC matchup is slated for 1 p.m. ET on CBS. Here’s all the details on the season-opening game:

Channel:
CBS with announcers Greg Gumbel and Trent Green. Click here to see a full map of what areas will see this game.

History is not exactly on Cleveland’s side here.

The Browns are the worst-opening day team in NFL history. History. The Browns have lost 10 straight Week 1 matchups. The next longest active streak is four. Since the league merger in 1970, Cleveland is 14-28. That’s a .333 winning percentage. Strictly speaking, that’s not very good.

It won’t be very easy for Cleveland to snap that streak either. The team’s general manager (Ray Farmer), offensive line coach (Andy Moeller) and standout receiver (Josh Gordon) are all serving league-sanctioned suspensions. For what, you ask? Farmer is being punished for texting during seasons, Moeller is embroiled in an alleged assault from last weekend and Gordon is on a one-year drug suspension.

Welcome back to football, Cleveland.

The quarterback brought in this offseason as the veteran back-up to projected starter Geno Smith is now front and center in the New York Jets offense and it will be up to the Harvard grad to get his team, metaphorically, flying.

Fitzpatrick had a pretty solid preseason but the Jets didn’t leave him with much back-up when making the 53-man roster cuts. The only other healthy QB on the New York roster is rookie Bryce Petty. In other words, it’s Fitzpatrick or bust in week 1. He’ll have to contend with a Cleveland secondary that has been touted as one of the best in the league, led by Pro Bowl’er Joe Haden, who finished with a career-best 73 tackles last season.

Also keep an eye on the Jets rushing attack. Cleveland was notoriously bad at defending the run last season and Gang Green’s three-headed running back monster was a bit of a preseason surprise. The ground plan racked up 504 rushing yards in four preseason games and could be a big-time addition to New York’s offense this year.