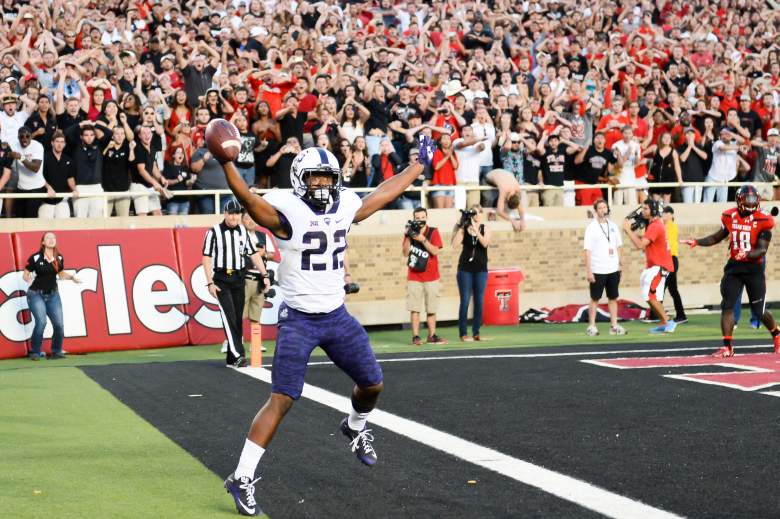 Aaron Green had the play of the day for TCU. -Getty

What a week of college football.

There was the shootout in Lubbock between TCU and Texas Tech that ended in a tipped touchdown reception. We had Texas losing for the second straight week due to a kick. SEC running backs Nick Chubb and Leonard Fournette continued their Heisman campaigns. Meanwhile, Tennessee proved the curse is real when they play Florida as they blew a large lead late in the fourth quarter.

The night ended with all three Pac-12 matchups turning into blowouts with UCLA, Utah and USC being the beneficiaries. All in all it was a great week of football. Whether you did not get to see any of the games or you simply want to relive the excitement, we have you covered.

Here are all the highlights from the Saturday that was Week 4:

Jared Norris not letting down on the intensity front and forces a fumble! #goutes #UTAHvsUO pic.twitter.com/4oIgTJssmZ

Utah won 62-20 on the road against Oregon. Vernon Adams got the start for the Ducks, but Jeff Lockie played the majority of the game. The Ducks have not looked like the Oregon we are used to seeing while Utah seems prepared to challenge for the Pac-12 South.

The Bruins defeated the Wildcats 56-30 on the road. It was a dominant performance by UCLA.

UCLA was led by running back Paul Perkins and quarterback Josh Rosen. Perkins had 24 carries for 85 yards and three touchdowns. Rosen finished the night 19-of-28 for 284 yards and two passing touchdowns along with a rushing touchdown. It was his first Pac-12 conference game, and he answered the call.

Kentucky Bounced Back Against Missouri

After losing a close game against Florida last week, the Wildcats got a home victory against the Tigers. Kentucky won 21-13 and were powered by quarterback Patrick Towles. Towles threw for 249 yards and 2 touchdowns. He also added a rushing touchdown.

Mississippi State Got a Victory at Auburn

The Bulldogs got a road victory against the Tigers as things continue to get worse for Auburn. Mississippi State won 17-9 in the debut of Sean White as starting quarterback for Auburn. White was 20-of-28 for 188 yards and one interception. He also had 11 carries for 29 yards, but it was Mississippi State that was victorious as Auburn suffered their second straight loss.

It was a wild one at Jerry’s World in Dallas. Texas A&M scored on their first possession in overtime. The Razorbacks were not able to score and the Aggies won 28-21. Maybe this makes Texas Tech coach Kliff Kingsbury just a little bit better after the Red Raiders heartbreaking loss.

TCU had the ball near their goal line and Texas Tech forced them to a fourth down. On fourth down, Trevone Boykin overthrew Josh Doctson in the back of the endzone but Aaron Green came just in time to swoop in for the game winning touchdown. TCU came away with the stunning 55-52 victory to avoid the Texas Tech upset.

After the play, as you can expect Twitter exploded:

After that Texas Tech/TCU game I need a cigarette

What a win for TCU! Lubbock a tough place to win. But the Horned Frogs better get healthy and get better on D or they have no shot at title

Dear College FB Gods: Please make the TCU-Baylor game at the end of the season as exciting as TCU-Texas Tech. Thank you. Love, All of Us

Texas Lost on a Field Goal…Again

After missing an extra point that would have tied their game against Cal last week it was heartbreak city for the Longhorns for the second straight week. Oklahoma State made a game-winning field goal as time expired to win the game. The field goal occurred within minutes of Tennessee’s missed field goal to complete a crazy afternoon of college football.

Tennesse Blew It Against Florida

Tennessee was penalized for illegal substitution which would have ended the game but the Vols used their final timeout with three seconds left to avoid a 10-second runoff.

The Vols had a double digit lead late in the fourth quarter. They allowed the Gators to score on a touchdown on a fourth down play that gave Florida the game winning touchdown.

Doctson scored on this 52-yard touchdown catch. TCU and Texas Tech went back and forth throughout the first half. Texas Tech had the lead late in the second quarter, but TCU responded with another touchdown with seconds remaining in the first half. They led the Red Raiders 33-28 at halftime.

On a 49-yard run against Southern, Chubb made it the 12th consecutive game where he has rushed for 100 yards or more. He tied Herschel Walker’s record and has the opportunity to break the record next week against Alabama.

Syracuse played host to LSU and hung in the game early. LSU led just 7-3 at halftime. However, Fournette continued his Heisman campaign with another dominant performance. He had 10 carries for 117 yards and a touchdown at halftime.

Michigan TB De'Veon Smith scores on a 60-yard run that is going to make all the highlights. Wolverines hammering BYU 21-0.

It was all Michigan early on as they led early in the first half 21-0. Devon Smith has looked dominant on the ground for the Wolverines. If we have learned anything from the first few weeks of the season, it is to never count BYU out of the game.

Michigan receiver Amara Darboh pulled off this amazing one handed catch against BYU. Not quite to the level of Odell Beckham but it was a nice catch nonetheless. Michigan was a seven point favorite going into the game. 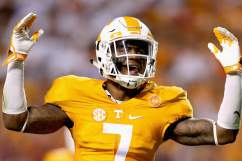