Cristiano Ronaldo snapped his goal drought, and did so in a huge way.

In Real Madrid’s La Liga matchup with Espanyol, Ronaldo scored a hat trick in the first 20 minutes and five overall to pass club legend Raul for the most La Liga goals in Real Madrid history.

The first came when he broke the Espanyol offside track. Then he converted a penalty to make it 2-0 in the 17th minute.

The third came just three minutes later, and wrapped up the hat trick and likely all three points for Real Madrid.

Any thing Naismith can do Ronaldo can do better ??? pic.twitter.com/2C6XoSfksv hat-trick in 20 mins #RMCF

Ronaldo would add a two more in the second half to complete the demolition.

Much was made of Ronaldo’s goal drought; he hadn’t scored in his last seven competitive matches for club and Portugal. He scored 61 goals in all competitions last year and has netted 50 in the last five seasons for Real. 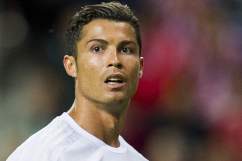