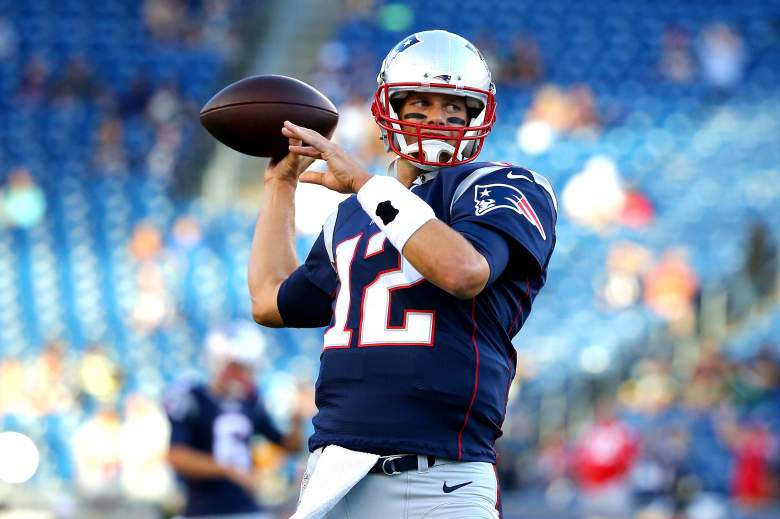 Patriots quarterback Tom Brady is available for Week 1 vs. the Steelers on Thursday. (Getty)

Sign up with DraftKings and enter the $1 Million Kickoff Contest, which begins Thursday night. If you are new to DraftKings, your entry is free.

The contest kicks off when the season does Thursday, September 10, when the New England Patriots host the Pittsburgh Steelers. Lineups must be set by 8:30 p.m. Eastern.

As stated above, when signing up for DraftKings for the first time, you will receive a voucher good for a free entry into the contest. You don’t need to use the voucher for this contest, but it expires after one year.

If you choose not to use the voucher, it is $3 to join the Kickoff contest.

In all, DraftKings will pay out nearly 85,000 entered teams.

You can have multiple entries into the Kickoff contest.

Click here to sign up for DraftKings with promo code HEAVY and get a 100 percent deposit bonus match up to $600 in time for NFL football.

If you’re entering this contest you’re likely using members of the Steelers and/or Patriots. That’s the appeal of this one.

I’m entering a bunch of contests for Week 1 with various lineups. Here’s one I am using for the Kickoff:

QB Tom Brady, Patriots: vs. Steelers, $7,700 — I probably don’t have to tell you, but Brady is coming out firing this season

RB DeMarco Murray, Eagles: at Falcons, $6,700 — Murray will be just fine in Chip Kelly’s offense; especially in this shootout

WR Davante Adams, Packers: at Bears, $4,400 — Unproven, but QB Aaron Rodgers is not and the Bears can’t cover

WR Emmanuel Sanders, Broncos: vs. Ravens, $7,900 — Sanders should have a field day as Manning’s No. 2 option Sunday

TE Delanie Walker, Titans: at Buccaneers, $3,400 — Walker is my go-to TE in Week 1 as he’ll see more than a handful of targets vs. a porous Bucs D

FLEX Golden Tate, Lions: at Chargers, $6,300 — Tate and QB Matthew Stafford are turning into a lethal duo and while Calvin Johnson gets doubled, Tate will rack up the targets

DST Jets: vs. Browns, $2,900 — The Browns are allergic to the end zone and the Jets will be much better after revamping their defense