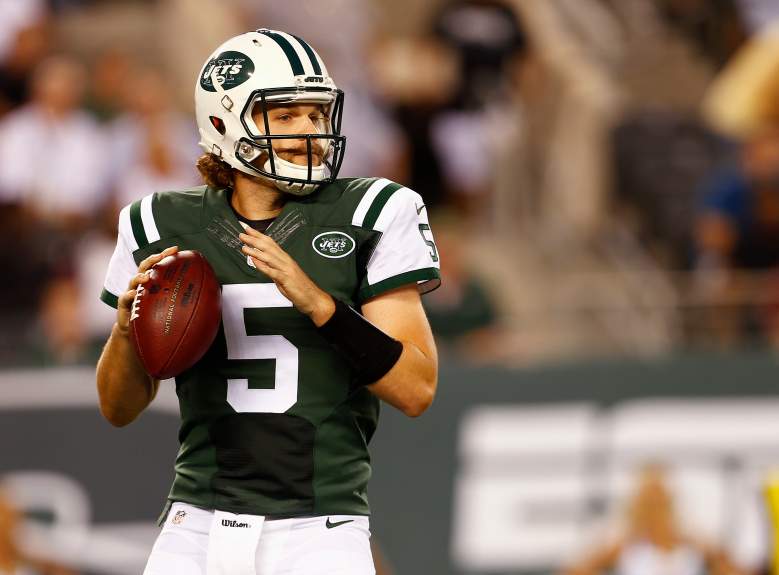 Matt Flynn threw for two touchdown and 136 yards in his first game as a New York Jets quarterback on Thursday night. (Getty)

The preseason is over and Matt Flynn may have just cemented his spot as the New York Jets backup quarterback. The NFL journeyman finished 136 yards, two touchdowns, one interception and completed 10 of his 14 pass attempts in his first night in green and white.

Overall, the Jets offense was firing on all cylinders against the Philadelphia Eagles, out-gaining their opponent 425-to-328. Although Flynn’s performance was certainly the highlight for New York, Gang Green’s growing ground attack made its presence known as well, racking up 215 rushing yards on 50 attempts.

Of course, Flynn wasn’t the only backup in the game on Thursday night. The battle for the Eagles No. 3 quarterback came down to a final 60 minutes in the final preseason game of the year. Tim Tebow certainly made his case for making the 53-man, throwing for 189 yards, two touchdowns and one interception. Matt Barkley, the former USC standout, hit a road bump early, throwing an interception on his second pass of the night. He finished 4-for-9 for 45 yards.

Coach Kelly on #Eagles53 evaluations: It can't be one game, make or break. This isn't American Idol. It's a compilation to determine the 53.

Click here for a full box score of the final preseason game of the year. Both teams will announce their final roster moves on Saturday and start their regular season campaigns next week.

Tim Tebow's game has never been described as pretty but he gets the job done. 9-yard TD on 4th and 6. #Tebow #Eagles pic.twitter.com/tTxzcDgTHk

The Eagles quarterback continued to make his case for a spot on the team’s 53-man roster with his second touchdown pass of the night, finding Freddie Martino in the end zone on fourth down. Tebow, with just over five minutes left in regulation, threw for 189 yards, completing 11 of his 17 attempts.

Interestingly enough, Matt Barkley, who started the game was barely heard from in the second half of play. Eagles coach Chip Kelly had suggested before kickoff that Barkley and Tebow would alternate drives in order to try and even out snaps.

A determined Daryl Richardson fights his way into the end zone for a 9-yard TD. He's having a nice game. Can he crack the 53? #NYJ

The Jets opened the second half with a slow-but-steady offensive performance, eating up time and marching down the field to further cushion their preseason lead. Daryl Richardson found the end zone on five-yard touchdown run that capped of a 14-play, 80-yard drive that took just over nine minutes of the third quarter.

Quarterback Josh Johnson was a perfect 3-for-3 on his opening drive of the night, notching 38 yards through the air.

Tim Tebow Led the Eagles on a Late Half TD Drive 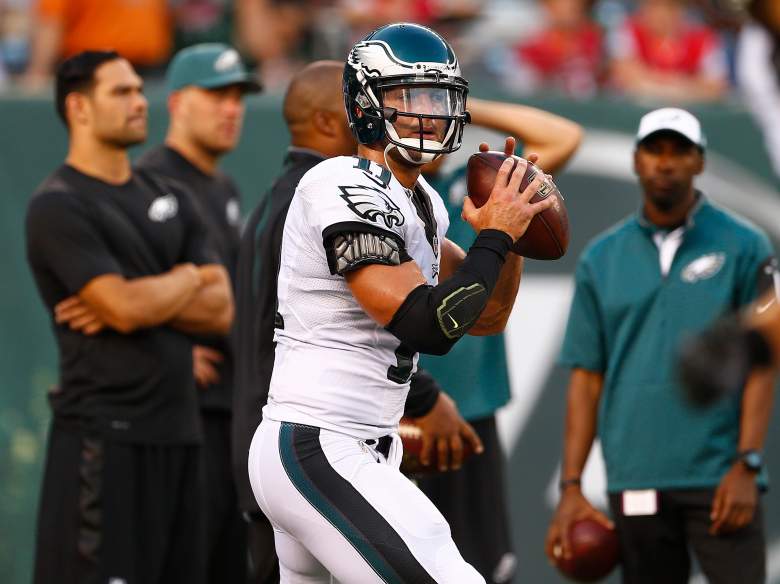 Philadelphia Eagles QB Tim Tebow racked up over 100 yards passing in the first half of his matchup against the New York Jets. (Getty)

Tim Tebow, fighting to stay on the Philadelphia Eagles roster, led the team on a late second quarter touchdown drive, capping it all off with an 18-yard pass to Rasheed Bailey.

Tebow converted on a handful of under-pressure plays, scrambling to the outside and using his feet more than once. Even the touchdown came on 3rd-and-16. This is the fourth preseason game of the year though, so there are bound to be mistakes and the Eagles made one on the ensuing extra point attempt, missing it to keep it a five-point game at halftime.

Heading into the break Tebow 6-for-10 for 105 yards and one touchdown. On the flip side of the QB competition, Matt Barkley was 3-for-6 for 38 yards and one interception.

A Jaylen Watkins Interception Led to an Eagles Field Goal

Interceptions for everyone! Less than a quarter after Eagles QB Matt Barkley was picked off by the Jets secondary, Philadelphia returns the favor.

Jaylen Watkins stepped in front of a Matt Flynn pass and brought the ball down the four-yard line. The Eagles offense wasn’t able to capitalize, at least not entirely and were forced to settle for their second field goal of the game.

The New York Jets offense looked good in the first half of this game. In a preseason that’s been a constant state of drama and tabloid backpages, Gang Green found a rhythm with Flynn under. The veteran QB threw his second touchdown pass of the night with 13:44 left in the second quarter, finding Zac Stacy on a screen from five yards out.

Even the Eagles were impressed:

Nicely designed screen pass to Stacy gets the Jets into the end zone. 14-3 NYJ.

After his second scoring drive, Flynn was 7-of-9 for 88 yards.

Nearly two weeks after he was signed as a free agent, the journeyman QB finally got his chance under center, nabbing the start in the final preseason game of the year. Flynn took advantage of his chance early, leading the Jets on a touchdown drive on the team’s first possession of the night.

New York’s run attack, which looked so good in week 3 of the preseason, was once again pushing pace but it was Flynn’s arm that capped off the drive, finding Chris Owusu for the 18-yard touchdown pass.

Matt Barkley Was Intercepted On His Second Pass of the Game

Well, that’s no exactly how you want to secure a roster spot.

Matt Barkley, currently fighting Tim Tebow for the third-string quarterback position on the Philadelphia Eagles, completed his first pass of the game on Thursday night. He competed his second one, too. Just to the wrong team. Barkley was intercepted on the second play of the and while Eagles receiver Josh Huff hustled to try and force a fumble in the moments directly after, the Jets recovered the ball.

Philadelphia Eagles head coach Chip Kelly had already said that most of his starters would not play in the week four preseason matchup, but the team made it officially official about an hour before kickoff. The list includes quarterbacks Sam Bradford and Mar Sanchez, defensive end Fletcher Cox and wide receiver Riley Cooper. To see the full list click here.

On the Jets side of things, Gang Green is keeping its regular starters on the sidelines. That means it is Matt Flynn time in New York.

As expected, Matt Flynn is the Jets starting QB tonight. Heavy dose of Flynn. Josh Johnson will play at some point in 2nd half. Probably

It’s the game of back-up quarterbacks.

Philadelphia Eagles coach Chip Kelly announced that his two potential third-string quarterbacks would get one last chance to compete for a roster spot on Thursday night before teams are required to cut their lineups to 53. Kelly said that Matt Barkely, the former USC standout, will start the game before, presumably, Tim Tebow will come in during the second half.

According to Kelly the Eagles haven’t formed a final opinion on who will be the back-up to Sam Bradford’s back-up and that it’s still a fairly open competition. “Trying to distribute the reps is the big thing, and we haven’t talked about exactly how we’ll distribute the reps,” he told ESPN.

The New York Jets are also testing out the quarterback waters as Matt Flynn is set to play his first game in a green and white uniform. Gang Green signed Flynn on August 18 and only just recently started practicing with the team after rehabbing an offseason hamstring injury. In other words, Flynn needs the reps. Expect him to see a good chunk of time on Thursday night.