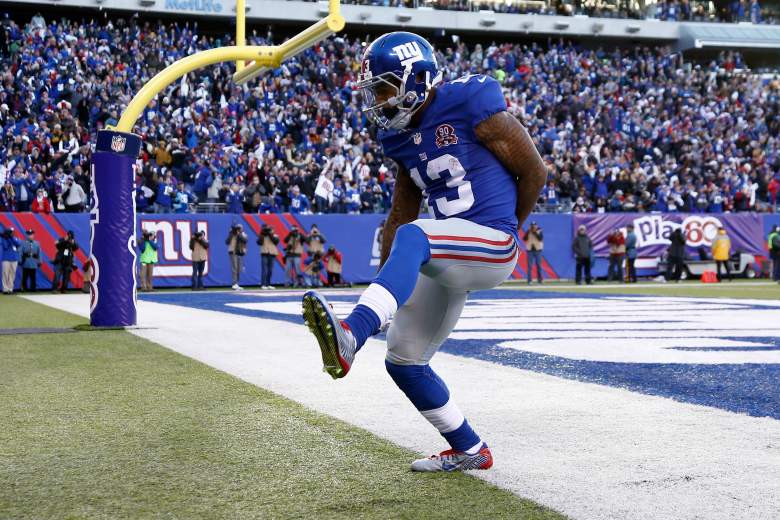 Odell Beckham Jr. is projected as one of the top wide receivers in the NFL this year. But what is is fantasy projection for week one? (Getty)

The last time the New York Giants faced off against the Dallas Cowboys Odell Beckham Jr. had a pretty impressive catch.

You might have seen it. Maybe? Possibly? If you’re a Giants fan there’s a good chance you watched that catch on repeat during the final few weeks of the season last year and then revved up the highlight again while the offense struggled to find any kind of rhythm this preseason. For good measure, let’s check it out one more time:

That play alone had most teams double and triple covering Beckham last season but it never quite seemed to phase him. Despite missing the first four games of his rookie year with a hamstring injury, Beckham racked up 91 catches for 1,305 yards and 12 touchdowns and was named the NFL Offensive Rookie of the Year.

He was good. Really good. He is expected to be just as good, if not better, this season. After all, think what Beckham can do with an extra four games.

Is there pressure to perform? Sure. But Beckham knows what is expected of him and, although he may not mention it during press conferences, he also knows what fantasy owners expect of him. He’s got to catch the football. Also he’s on the cusp of history:

Odell Beckham Jr. has a chance to break Michael Irvin's NFL record of nine consecutive 90-yard games by a wide receiver on Sun. In Dallas.

Why? Aside from his ridiculous rookie season, Beckham is going up against a Dallas Cowboys secondary that took on the brunt of the team’s injuries this preseason. The Cowboys lost their top cornerback Orlando Scandrick to an ACL tear during training camp and that means Brandon Carr will likely be tasked with covering Beckham on Sunday night. Scroll back up for a second and rewatch that video of Beckham’s catch against Dallas. What’s the name on the Cowboys jersey trying to defend him? It’s Carr.

You can probably expect Beckham to be a big-time target for the recently contract-extended Eli Manning as well, particularly if Victor Cruz is unable to go.

For daily leagues, Beckham costs $9,200 in DraftKings $1 million contest. That’s a lot, yes, but it could definitely be worth it once Beckham starts catching the football – even if he has to do it with both hands.