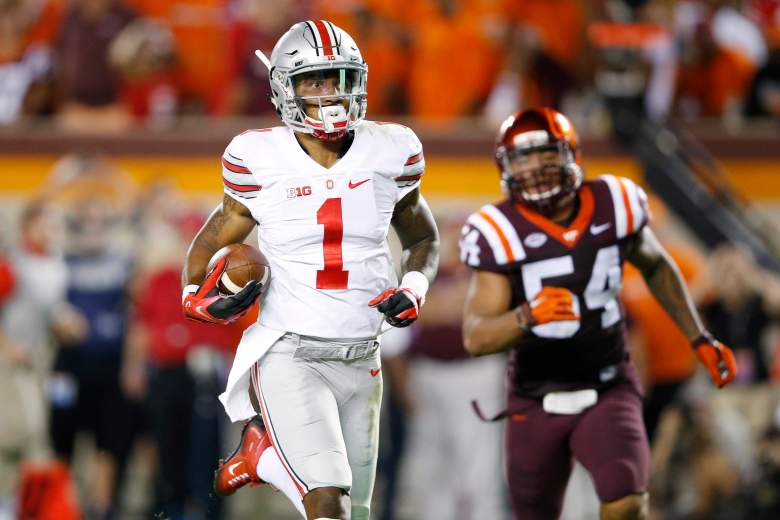 Braxton Miller had an amazing performance against the Hokies. -Getty

Ohio State got the revenge they were looking for as they defeated Virginia Tech 42-24 at Lane Stadium as each team began their season. It was the Hokies that gave the Buckeyes their lone defeat a year ago during their championship run.

Cardale Jones started at quarterback for Ohio State and appears to be the starter going forward. He finished the night with 9-of-18 passing attempts for 186 yards and 1 touchdown. He also had 13 rushes for 99 yards and one touchdown. The story of the night was Braxton Miller’s performance at wide receiver. Miller switched from quarterback over the offseason due to the Buckeyes depth at the position. Miller had 78 receiving yards, 62 rushing yards and two touchdowns. Miller was used all over the field at multiple positions by the Buckeyes.

Virginia Tech actually led 17-14 at halftime but lost starting quarterback Michael Brewer in the third quarter due to a broken collarbone. From that moment on, it was all Ohio State.

Here are the highlights, stats and analysis from Ohio State’s defeat of Virginia Tech:

Both @VT_Football and @OhioStAthletics will wear commemorative helmet stickers for Adam Ward and Alison Parker. pic.twitter.com/hW9PNUeJqV

The Buckeyes and Hokies honored the journalists that were tragically killed. The decal featured the number 7 for the news channel they both worked at in addition to two ribbons honoring each victim.

While many experts predicted J.T. Barrett would start for the Buckeyes, it was Cardale Jones that took the first snaps under center. Jones led Ohio State in the National Championship game in Dallas last season. It was a move that apparently had Ronda Rousey’s approval.

Cardale Jones threw the long bomb to receiver Curtis Samuel. Virginia Tech was flagged for pass interference but Samuel was able to catch the touchdown. This game marked the first actual road game Jones has played in for the Buckeyes. His prior starts came during neutral site games.

Elliott was one of the best running backs during the second half of the 2014 season. He picked up right where he left off with this 84-yard touchdown run right up the middle of Virginia Tech’s defense. The touchdown gave the Buckeyes a 14-0 lead early in the first half.

Virginia Tech Responded Early in the Second Quarter With a Touchdown

After Virginia Tech backup quarterback Brenden Motley came in for a couple plays, Michael Brewer came back into the game. Brewer threw this 51-yard touchdown pass to fullback Sam Rogers. Rogers started out in the backfield and ran a wheel route. Rogers was wide open and eluded an Ohio State defender as he ran into the endzone.

Jones scrambled to his left and threw a pass that was deflected right into the arms of Virginia Tech’s Demond Frye. The play was reviewed and the interception call on the field was upheld. It was the first major mistake for Jones of the game.

Elliott Fumbled a Punt and the Hokies Recovered

In addition to being the featured running back, Elliott also returns punts. Unfortunately, he fumbled the ball on a punt late in the second quarter. Virginia Tech recovered on the Ohio State 38 yardline and was able to capitalize on the turnover.

The Hokies took the lead on a touchdown with just seconds remaining in the first half. Virgina Tech had this brilliant play action play call. After the fake handoff, Brewer rolled to his right and found tight end Ryan Malleck by himself in the left corner of the endzone.

Michael Brewer Is Out for the Rest of the Game

Hokies quarterback Michael Brewer missed the rest of the game with a reported broken collarbone. Backup Brenden Motley came in for the Hokies. Motley played a couple of plays in the first half but was used as a rusher. The recovery time for Brewer is an estimated 4-5 weeks.

After the Buckeyes recovered a fumble, Miller received the ball in the backfield and ran for a 53-yard touchdown. The most memorable part of the play was the spin move. He has been used all over the field by the Buckeyes and was the x-factor in the game.

The Hokies Had Two Crucial Turnovers

Motley threw into double coverage for an interception. A possession before that the Hokies fumbled the ball and the play resulted in a Buckeyes touchdown.

Jones rushed up the middle for a 10-yard touchdown run. It was all Buckeyes in the second half. The impact of Brewer being knocked out for the game seemed to impact both the offense and defense for Virginia Tech. Jones passed for two touchdowns and rushed for one.

J.T. Barrett Entered the Game and Threw a Touchdown Pass

J.T. Barrett entered the game at quarterback for the Buckeyes midway through the 4th quarter. In addition to this play connecting with receiver Michael Thomas, Barrett also had a big run for 40 yards.

The Hokies Scored a Late Touchdown

Motley finally threw a touchdown pass late in the 4th quarter. He finished 4-of-9 for 36 yards with one interception and one touchdown. Motley will likely be the starting quarterback for the Hokies in the weeks to come with Brewer suffering a broken collarbone early in the game. 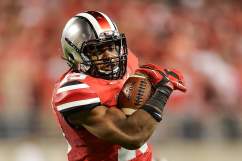 Read More
College Football, Football
Ohio State defeated Virginia Tech 42-24 in Blacksburg. We recap the contest with highlights, stats and analysis of the first game of the season for both teams.