As the Oklahoma Sooners head to Neyland Stadium to take on the Tennessee Volunteers, both teams are in different places than a season ago. Early in the 2014 season, Oklahoma defeated Tennessee 34-10 in Norman. At the time, the Sooners were ranked 4th in the country and many projected them to win the National Championship at season’s end.

Less than a month later, Oklahoma would lose to TCU and begin their fall from grace. The Sooners finished with an 8-5 record much lower than their early season projections.

While Tennessee’s 7-6 record did not shatter any records in 2014, their play was enough to have people excited for the coming season. The Volunteers have been built on top flight recruiting classes over the past three years which could point to a solid 2015 season.

Both teams come in with huge wins over sub-par opponents. Tennessee defeated Bowling Green 59-30 and had 399 rushing yards. Oklahoma’s new starting quarterback Baker Mayfield set a school-record for passing yards in an opener with 388 in a 41-3 defeat of Akron. The nation will have a sense of how good Oklahoma and Tennessee are this season after they play each other.

Here are all the game details:

Who:
Oklahoma Sooners vs. Tennessee Volunteers

Line:
Oklahoma by 3 (Line is according to OddsShark and subject to change.)

Last Meeting:
Oklahoma won at home against Tennessee 34-10 on the third week of the last season. 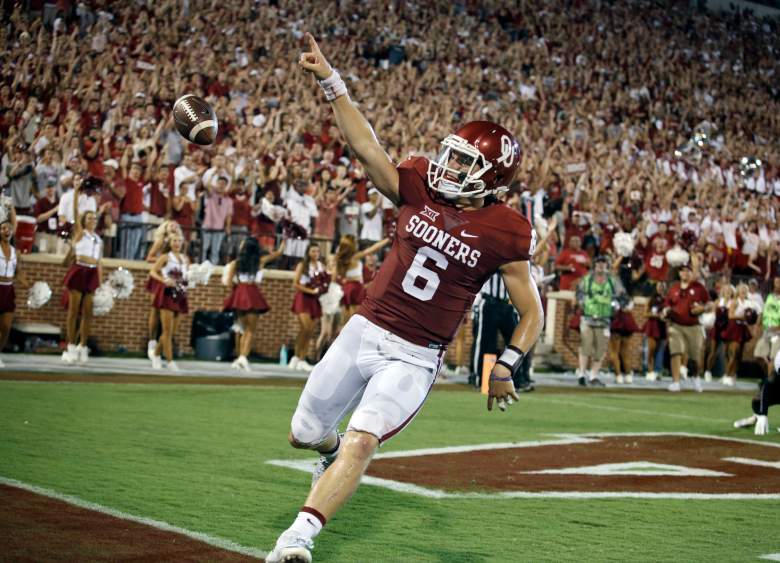 The attention lies on quarterback Baker Mayfield. Mayfield transferred from Texas Tech and was competing with Trevor Knight for the starting position. Mayfield had an impressive Oklahoma debut, but will get his first true test against Tennessee.

Oklahoma running back Samaje Perine is back for the Sooners. Perine set the college football record for rushing yards in a game last season with 427 yards against Kansas.

Three players to watch on Tennessee’s potentially explosive offense are quarterback Joshua Dobbs, running back Jalen Hurd and wide receiver Pig Howard. For the Volunteers to have the type of year they are capable of having the above trio must continue to lead the team as they did last week against Bowling Green.

Certainly, 399 rushing yards is a great start but with the Volunteers schedule they will need to prove their worth against quality opponents like Oklahoma. After being demolished by the Sooners a season ago, the Volunteers have the opportunity at home to prove that Tennessee football is back.

This is a different game than last year. Tennessee has a legitimate shot at winning this game at home. It should be a highly competitive game, but in the end Oklahoma has slightly more firepower which leads them to victory. Baker Mayfield’s performance could be the x-factor in the game.

Read More
College Football, Football, Sports Betting
The Oklahoma Sooners travel to Knoxville to take on the Tennessee Volunteers. We preview the game and tell you who is going to win.